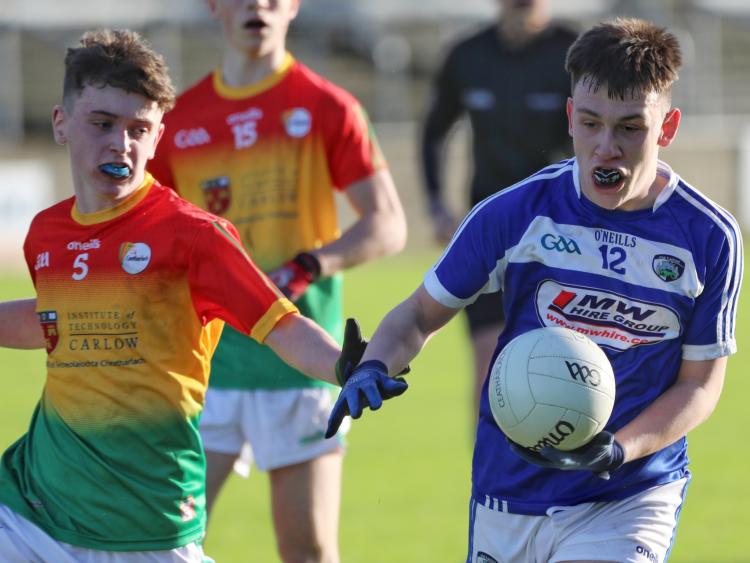 Laois powered past Carlow in Portlaoise on Saturday afternoon as they lead from pillar to post to book their place in the semi-finals of the Leinster Minor Championship. They beat a poor Carlow side and a powerful first half laid the foundations for the impressive win. Goals from Colin Dunne and Conor Heffernan helped Laois book their place in a third consecutive Leinster Minor semi-final.

On a bright, sunny afternoon, it was certainly Laois who started the brightest.  They raced into an early 1-3 to 0-0 lead in the first five minutes. Portlaoise man Kieran O’Donnell opened proceedings with a beautifully taken free. O’Donnell turned provider two minutes later as he caught a Carlow kickout and found Ross Meredith who split the posts. Just four minutes in, and Laois got their first goal of the game. Conor Heffernan found himself in front of the Carlow goal after a good move by Simon Fingleton and Conor Kelly and Heffernan made no mistake about burying the ball past Jason Brennan in the Carlow net.

Laois’ dominance in the opening quarter was phenomenal as they worked tirelessly, enjoying a high turnover rate, especially on the opposition kickout. With Carlow struggling to create anything or work the ball up field, Laois smelt blood and went for the jugular. Ross Meredith made a piercing run through the Carlow defence before offloading to Colin Dunne who rattled the back of the net to give Laois a 2-4 to 0-0 lead after just 12 minutes of play.

It took Carlow until the 13th minute to find their first score and it came off the boot of Oisín Dillon. Carlow captain Conor O’Neill added a second five minutes later with an audacious effort with the outside of his right boot to reduce the deficit to eight points at the first water break.

The Laois storm did not ease upon the resumption of play as they continued to dominate in all sectors of the field. Colin Dunne raised his hand for a mark and the umpire raised his hand, with the white flag in it before Dunne added another from play. Kieran O’Donnell slotted a ‘45’ over the bar. It proved to be the last score of the half, as Laois went into the break with a healthy 12-point lead.

A Bryan McMahon free at the start of the 2nd half may have gave the slightest of hope to the Carlow men but this was short lived. Colin Dunne got his 4th of the day and Conor Kelly quickly pointed after for Laois. Half time substitute Kian Lawlor nearly added his sides third goal, only for his low shot to hit the side netting.

Shaun Fitzpatrick pointed for Laois just before the second water break as they headed in with a 14-point cushion and cruising.

As both teams emptied their respective benches and the game effectively over as a contest, scores began to dry up. Conor Kelly scored his third of the day from a well worked ‘45’.

Substitute Kian Lawlor was rewarded for his hard work with a point as the game entered injury time, and that proved to be the final score of the game as Laois march onto the Leinster Semi Final, where they will face Meath next Saturday.