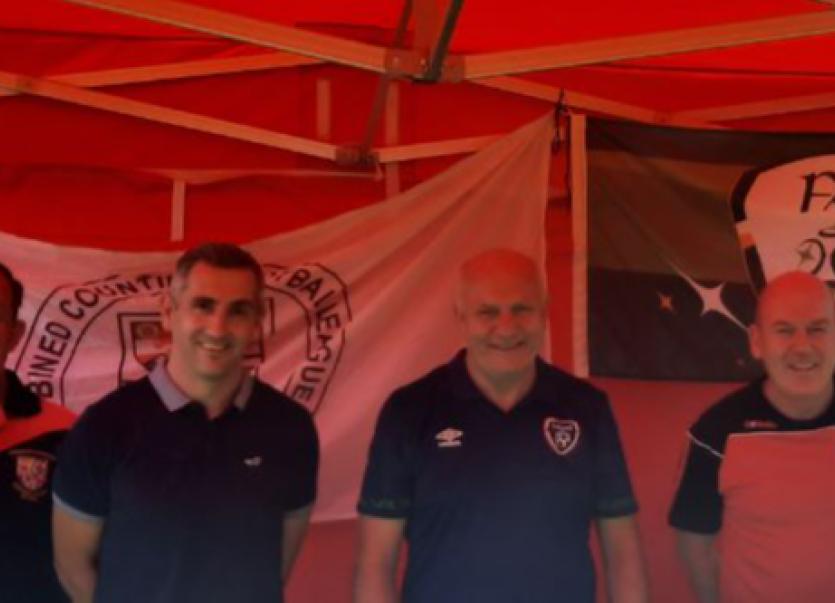 Laois soccer has got a shot in the arm as ambitious plans have been unveiled by the Combined Counties Football League (CCFL) for a Centre of Excellence in Kilbeggan, Co Westmeath.

The development, which will have a price tag of at least €2m according to CCFL Chairman, Kevin Egan, will be developed off the town's Clara Road in a series of phases over the coming decade.

When completed the centre will comprise three playing fields to the FAI/ FIFA standard and a changing facility building which will include four dressing rooms, two referee changing rooms, public toilets, a meeting room, kitchen and ancillary rooms.

The centre will also comprise car and bus parking facilities and a community walkway stretching to about 900 metres.

Inspecting the greenfield site on Wednesday afternoon last, the President of the FAI, Gerry McAnaney said the development was part of a strategy to improve facilities around the country.

He predicted that as well as catering for the needs of the four counties of Offaly, Laois, Westmeath and Longford it will be of national importance considering its central location and the crucial motorway links.

FAI Facilities Manager, Walter Halloran promised to help in drawing up a road map to secure funding for the ambitious project.

Speaking at the informal launch and press conference, Kevin Egan said the league bought the field four and half years ago with a view to developing a major centre for the four counties.

Thanking the FAI for their support, Mr Egan said he hoped the football community and the entire Midlands would get behind the venture.

“We want to get everyone involved in this so as to develop a first class venue for football,” he said.

The Roscrea based chairman added the Centre of Excellence will be developed in phases with the first involving the construction of a basic pitch and dressing rooms.

Gerry McAnaney said one of the pillars of the FAI's new strategy was the whole area of facilities.

“Projects such as this are exactly those which we will be delighted to support,” said the FAI President who also predicted that the development would attract support from the whole community.

Asked about FAI financial aid for the project, Mr McAnaney replied “we're not in a position [to provide funding] at the moment for all the well known reasons but down the road we will be looking at supporting projects such as this.”

“We have an excellent facilities department run by Walter Halloran and he will bring his expertise into play to put the right plan in place,” he added.

The FAI President said the association now had a very good relationships with Sports Ireland and the Government.

“Our stock has risen significantly with UEFA and FIFA and getting the Europa finals here in 2024 was a great boost. UEFA would not have given us that if they thought we were not to be trusted.”

He said great credit was due to the CCFL and the people at the informal launch for embarking on such an ambitious development.

“There is an excellent community in Kilbeggan and I'm sure there are local businesses and community groups who would like to get involved,” said Mr McAnaney who remarked it was “very refreshing to see a blank canvass”.

He said that in continental Europe many towns boasted stadia municipal which were open to the whole community and he envisaged the Kilbeggan development being a similar such facility.

Walter Halloran said it will be great to have such a first class facility in Kilbeggan and he also congratulated all invovled.

He promised to help devise a road map for the technical and funding aspects of the Centre of Excellence.

CCFL Secretary Chris Hand acknowledged there is no direct funding available from the FAI at present for the centre but said Mr Halloran would maximise fundraising opportunities.

He said that CCFL had been founded 16 to 17 years ago and during that time clubs, including Birr Town, had developed great facilities.