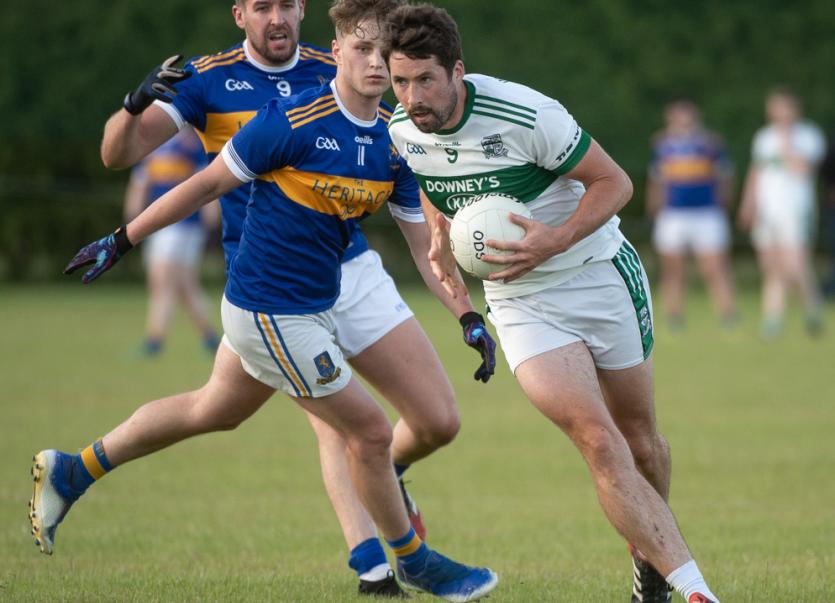 After suffering defeat at the hands of O’Dempsey’s in the previous round of games, Portlaoise got back on track in Rathleague against a Courtwood outfit who fought to the bitter end of this one. Goals from Benny Carroll, Kieran Lillis and John Kavanagh rounded off a solid display from ‘The Town’.

It was all Portlaoise for the first fifteen minutes, and Courtwood were very grateful when referee Brendan Hickey whistled for the first water break. Paul Cahillane, Kieran Lillis, and Ricky Maher raised white flags early on before Portlaoise had their first sight at goal.

Full-back Frank Flanagan ran the full length of the field, as nice, swift passes from John Kavanagh and Kieran Lillis afforded Flanagan the goal chance, but his shot thundered back off the post. However, Portlaoise did grab their goal from the next possession, as Benny Carroll finished to the net despite being put under pressure.

Cian Doyle curled over Courtwood’s opening score, a sublime outside of the boot effort from the left-hand side. Gareth Dillon replied for Portlaoise though, and then Kieran Lillis struck for goal number two after a through ball from Paul Cahillane sent him through on goal. Cahillane could have scored a third goal straight after that, but his shot was brilliantly blocked off the line by Courtwood full-back Mark O’Halloran.

The water break allowed Courtwood to catch their breath and settle down. Alan Kinsella converted two frees on the trot, and while Cahillane kicked a free down the opposite end after, Danny Luttrell sent over another point from a placed ball for Courtwood to cut into the deficit.

Gareth Dillon had another sight at goal soon after strong, quick running from the wing-back, but Dillon’s shot was well saved by Courtwood shot-stopper Eoghan O’Neill. Cahillane kicked over a free and Conor Boyle then scored from play after he caught the Courtwood kick-out and landed a lovely effort.

Courtwood finished the half strongly, with Kinsella kicking two frees, while Luttrell also scored from a placed ball situation. They trailed 0-7 to 2-7 at half-time in Rathleague.

Corner-back Chris Finn fisted over for Portlaoise after the interval, as he latched onto a pass from Benny Carroll. Luttrell replied for Courtwood, but a Ricky Maher point was followed by Portlaoise’s third goal. Substitute DJ White and Kieran Lillis were involved in the build-up, which resulted in John Kavanagh firing to the net.

Cahillane scored another fine effort before the second water break, and Portlaoise were comfortably clear at this stage on a score of 3-10 to 0-8.

Benny Carroll, who was terrific throughout, curled over another for Portlaoise after the water break following nice inter-changing passes between him and Conor Boyle. Courtwood, to their credit, were determined to not let their heads drop and kicked the last five scores.

Niall Dunne landed a free, before the impressive Alan Kinsella kicked four scores of his own which included two from play. However, Portlaoise got the result they needed to go top of Division 1B, and they’ll have a vested interested in how the O’Dempsey’s and Portarlington clash plays out on Tuesday.

The comeback queens do it again