The comeback queens do it again 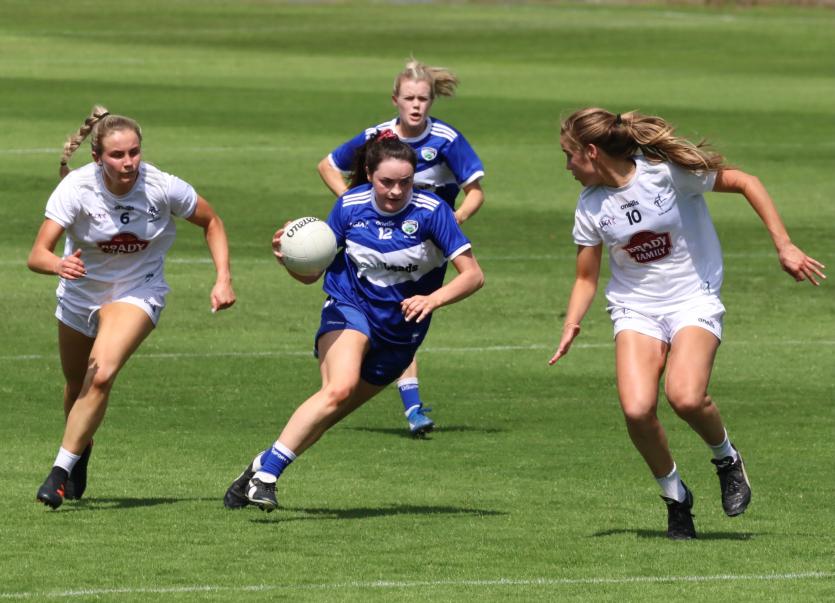 Laois and Kildare ladies played out an exhilarating game of championship football in Portlaoise on a very warm Sunday afternoon. The game swung back and forth throughout, but in the end, Laois managed to land the final blow and get their first points on board in this three-team group alongside Kildare and Roscommon.

There wasn't much to separate the sides in the opening few minutes of this one in O’Moore Park. Aoife Rattigan opened the scoring for Kildare, before Laois’ main women, Mo Nerney, placed over a free. Neasa Dooley and Mo Nerney (free) exchanged further points before Kildare broke the cycle by knocking over two scores in a row.

Lara Curran (free) and Ciara Wheeler got their names on the scoresheet, but Laois struck back with the first goal of the game. Full-forward Sarah Ann Fitzgerald’s point attempt looped just under the crossbar and into the back of the Kildare net.

The opposite corner-forward, Neasa Dooley, responded for Kildare with a lovely point to level proceedings. However, Laois landed goal number two into the net moments later. They played some very patient football before Nerney found Orla Hennessy, who feigned one way and the other before burying it to the net.

Midfielder Fiona Dooley found the target as well before the first water break with a point, as Laois led 2-3 to 0-5. Lara Curran from Kildare swapped further frees with Nerney after the restart as Laois maintained their advantage. Erone Fitzpatrick fired them further ahead after the Park-Ratheniska native curled over a fine effort after strong running from Amy Potts and Anna Healy in the backs.

Kildare almost grabbed a goal before half-time, but Gillian Wheeler’s thunderous attempt came back off the uprights. Laois held a 2-7 to 0-8 advantage at the interval, but in truth, the game was a lot closer than the scoreline indicated.

It looked like Laois were going to march on after play restarted as well, as they raised a third green flag nearly straight from the whistle. Joyce Dunne found Sarah Ann Fitzgerald with the pass, and Fitzgerald fired in her second goal of the game.

However, Kildare showed their character by going down the other end immediately and scoring a much-needed goal themselves. Eimear Barry in the Laois net pulled off an excellent save from Nanci Murphy at the first attempt, but Gillian Wheeler made no mistake with the second opportunity.

It was all Kildare after that for the next ten minutes or so. Lara Curran and Nanci Murphy landed a point apiece, and then Nease Dooley converted a penalty after Ellen Healy was deemed to have pulled back Murphy in the square.

Ciara Wheeler, Neasa Dooley and Gillian Wheeler all raised a white flag for Kildare, who now led 2-13 to 3-7 as the second water break was whistled for.

The break came at just the right time for the Laois women, thankfully, as they managed to regain their composure and turn things around. Substitute Leah Tarpey landed a point, before Laois were awarded a penalty themselves.

Nerney was brought down just inside the square, and after careful deliberation with his umpires, Barry Redmond awarded the spotkick. Nerney stepped up to take the penalty herself, and she coolly slotted home.

The same woman added a point to her name moments later, as Laois now led again. Grace Clifford replied for Kildare, but Laois continued to march on with substitute Alanna Havill and Nerney again firing over super scores.

Kildare had one last chance at the end of the match to steal a victory, but Lara Curran’s free was stopped on the line by the Laois women and they held on for the win.