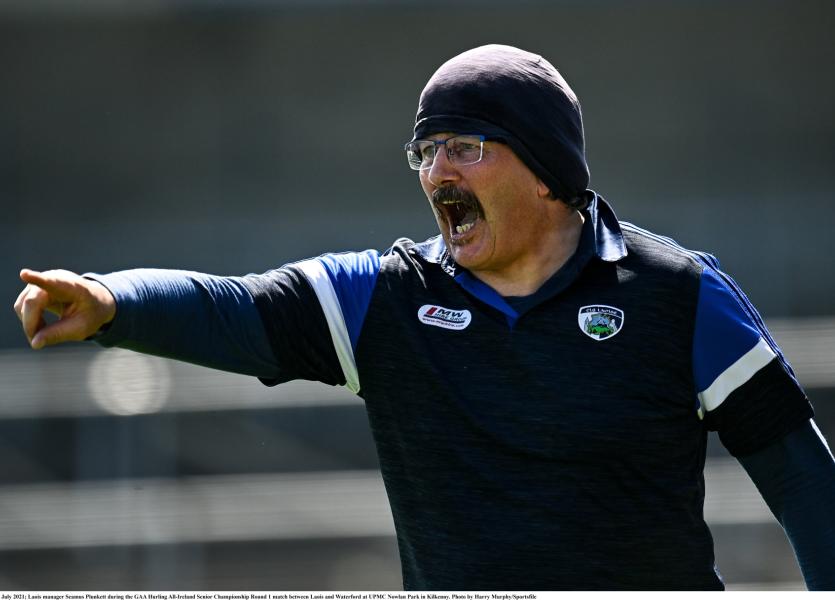 Don’t worry about the occasion, be true to the process and to yourself. Seamus “Cheddar” Plunkett led by example on that front when he decided to wear his trademark woolly hat on a day when temperatures at UPMC Nowlan Park in Kilkenny reached 28 degrees, and he showed it at the end of the game too.

When all of Laois was thinking of the missed opportunity that had just slipped away, and the county’s failure to convert a strong position into a win, Plunkett was still thinking about the bigger picture, and the next challenge in the diary – in this case, a league relegation playoff against Westmeath.

“I’m not interested in these sort of moral victories out of losing a game like that” was how he introduced his thoughts.

“We could have won the game. I’m not interested in that. I’m interested in how we can go about improving ourselves, developing that and turning over some of these teams. You don’t need to beat them the whole time but you need to turn them over on a reasonably regular basis to give you the self-confidence that you can beat them” he continued.

“We have a relegation match next week against Westmeath to see who is going to stay in the premier division of the national hurling league. That game (against Waterford) is over now as far as I’m concerned. Our full focus is getting ourselves ready for the next Saturday and lifting ourselves off the floor to be ready for the same type of fight and the same type of honesty again next Saturday”.

Neither he, nor anyone else who was in attendance in Kilkenny, could deny however that this Laois team is in a very different place to where it was walking off the field at the end of their grueling defeat to Wexford in the Leinster championship.

“Performances are what you are always looking for and when the team and management speak about these things; they mention performance, adjustments and the changes that you make, and did they work. We left a little bit of space around the middle earlier and Waterford hurt us. We had to adjust that and you might leave yourself a little thin up top” he said.

“That’s where hurling is at the minute. It’s a chess game and the water breaks nearly make that more of the case. I suppose that’s an area that you can only learn from at this level. We are not talking about systems hurling. We have stripped it back to getting the fundamental things right first and then we look at adjusting those tactical parts is something that we need to be able to do better. We are doing it reasonably better but we just need to improve on some things”.

“Next Saturday, it’s all about getting the result and winning. I would like to commend Waterford. It was a psychologically tough game for Liam (Cahill, Waterford manager) to come in here when you consider bookies were making Waterford 1/50 on and sometimes that gets into the minds. I would like to commend Liam (Cahill) and commend Waterford. It was a great game and they will definitely have a lot to say in this Championship I think”.

For Laois, championship is over – but the wheel keeps turning, the games keep coming, and through it all, Cheddar will continue to plot the county’s way forward, no matter what. Hat on, no matter what.