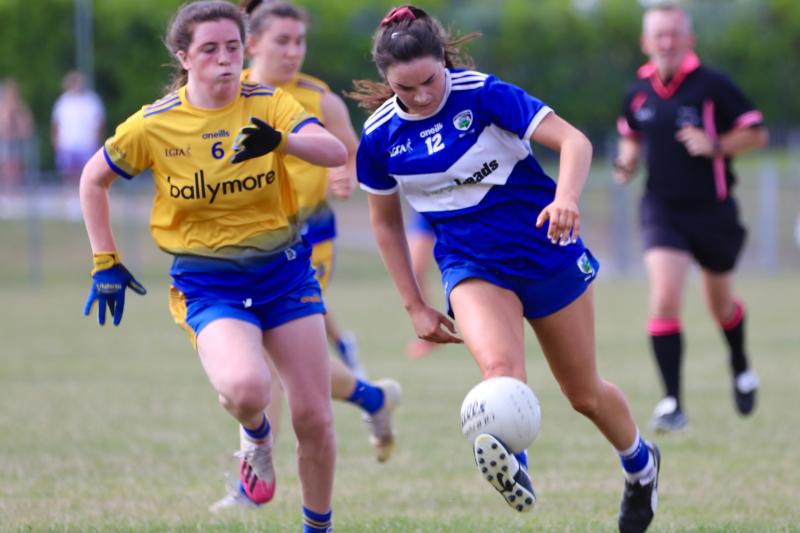 Laois marched into the quarter-finals of the TG4 Ladies intermediate championship on the back of a comfortable win over Roscommon at Kinnegad this afternoon, firing in three goals and missing chances to post as many as a half a dozen more in a contest that was far more one-sided than the very tense and competitive 4-15 to 5-9 win Laois enjoyed over the same opposition in the league semi-final.

This was a game that Laois dominated for large stages on the back of complete control of their own kickout, and far greater fitness and conditioning in what was incredibly hot conditions at the Westmeath venue.

Their failure to convert more chances will be something for Donie Brennan and his management team to work on, but he will be pleased by the fact that his side were creating these opportunities against a physical and experienced Roscommon unit.

With Laois leading by four points early in the second half, they suffered a blow when midfielder Jane Moore rather harshly sin binned, which meant spent the next 10 minutes with 14 players.

However, they prevented Roscommon from scoring during this time as they soaked up the pressure imposed by the Connacht side. Laois managed to create two goal chances of their own during this period, the first coming after Roscommon goalkeeper Helena Cummins failed to deal with a high ball as Sarah Ann Fitzgerald saw her palmed effort cleared off the line by a last ditch Róisín Wynne intervention.

Then a great break out of defence by Anna Healy, led to an Erone Fitzpatrick goal chance and a penalty, but Mo Nerney saw her shot hit the post. However, they found the all important third goal in the 45th minute when an exquisite Erone Fitzpatrick pass found Moore, who was back from her sin bin and she calmly powered the ball past Helena Cummins to effectively kill this game as a contest.

With both sides ringing the changes, the game lost all its momentum late on, with Roscommon kicking the final three points of the game. They failed to score for 22 minutes prior to that after some tigerish Laois defending, especially when down to 14 players.

There were goal chances galore in the opening half with Roscommon creating the first one as Roisin Wynne saw her effort blocked away. Mo Nerney rattled the crossbar when going for goal in the fifth minute as her effort flew over.

Laois did find the breakthrough two minutes later, as Fiona Dooley powered through the Roscommon defence to slot home. The Connacht side were stubborn opposition and they found a major of their own. Rebecca Finan and Rachel Fitzmaurice exchanged passes with the latter burying her effort to the net.

The drama continued as Laois looked dangerous every time they attacked. Laura Nerney struck for Laois’ second goal after an excellent pass from Anna Healy. Laois only kicked a point in a flat second quarter to lead by 2-5 to 1-4 at half time.

Despite the numerical disadvantage in the third quarter this is the period where Laois ensured their victory as despite all their missed goal chances, their defence held out while they found the all-important third goal.