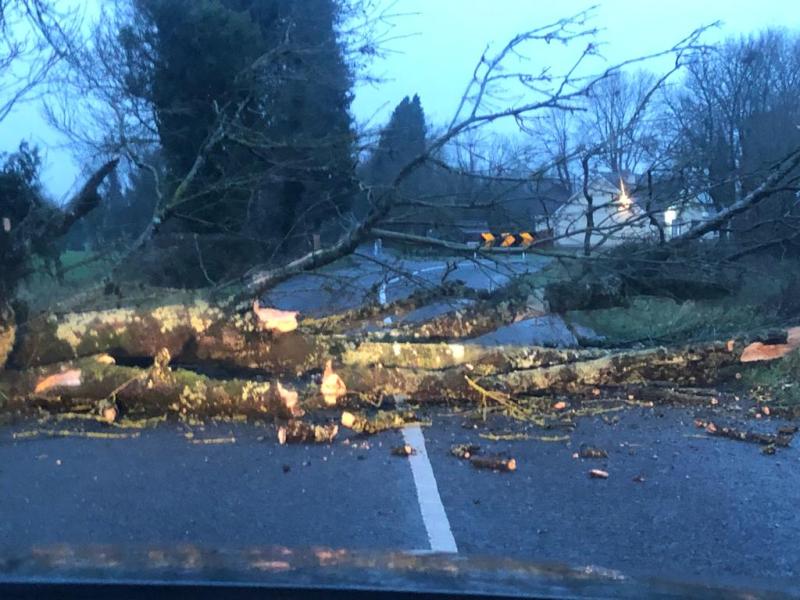 "Due to Storm Barra, northwest winds will reach mean speeds of 50 to 65 km/h and gusts of up to 100 km/h with localised stronger winds likely," it said.

Storm Barra: Over 100 homes in Laois town without electricity

A Status Orange warning for Donegal runs from from 9.50am until 2pm on Wednesday. Gusts of more than 100 km/h were recorded on Wednesday morning in Finner.

"Northwesterly winds will reach mean speeds of 65 to 80 km/h with severe or damaging gusts of 100 to 130 km/h, with localised stronger winds likely. Due to a combination of high waves, storm surge and high tide, coastal flooding is expected. Disruption to power and travel are likely," says the Orange alert.

Status Orange and Yellow Warnings continue to apply sea areas around the coasts.

NATIONAL FORECAST issued at 8:53 am on Wednesday December 8.

WEDNESDAY: Continuing windy during the morning, especially in the northwest, where northwest winds will continue very strong and gusty. Winds will gradually ease over Munster and south Connacht this morning and over the rest of the country this afternoon and evening. Sunny spells and showers of rain, sleet or hail, heaviest in Ulster, north Leinster and Munster. Cold with highest temperatures of 4 to 7 degrees Celsius.

Any lingering rain will soon clear the northeast tonight. Generally dry, calm and clear for a time with some frost and possible ice. Later tonight, outbreaks of rain will move in from the west, along with low cloud, hill and coastal fog. Lowest 0 to 3 degrees Celsius,

THURSDAY: Overall cloudy to begin on Thursday with scattered outbreaks of rain, and moderate southerly winds. A clearance to sunny spells and scattered blustery showers will follow into the afternoon with freshening westerly winds. Highest temperatures of 7 to 11 degrees Celsius.

Cold with showers across Atlantic counties, some of hail with sleet on high ground. Lowest temperatures of 1 to 3 degrees Celsius, in a rather brisk westerly wind.

FRIDAY: A cold day with sunny spells and showers of rain or hail, mainly affecting western and northern coastal areas. Afternoon temperatures of 5 to 8 degrees with an added wind chill factor, owing to a moderate to fresh northwest wind.

Patchy outbreaks of rain will feed in across the country, in a mostly moderate southerly breeze. Lowest temperatures of 3 to 6 degrees Celsius.

SATURDAY: Widespread falls of rain will move in across the country with low cloud, hill and coastal fog. Temperatures in the afternoon will range 9 to 12 degrees Celsius, in a mostly moderate southwesterly wind.

SUNDAY: A cloudy day with outbreaks of rain and strengthening southerly winds. Afternoon temperatures will range 10 to 13 degrees Celsius.