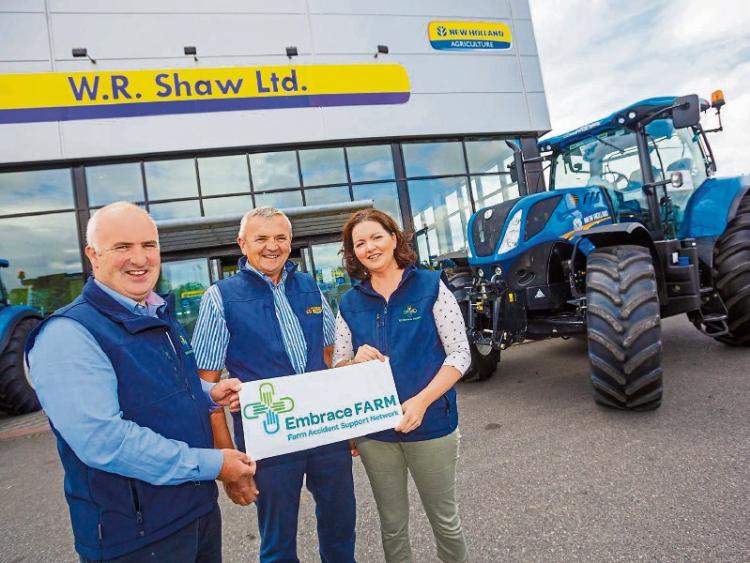 The 2018 National Ploughing Championships sees the conclusion of ‘Our Drive to Remember’ 32 county tractor drive campaign in memory of lives lost and seriously injured on Irish farms and in raising awareness for farm safety.

It will arrive at the WR Shaw Stand at the show at 10.15am on Row 16, stand no 334. That will be followed at 11.30am by the ‘Walk of Light’ with Brian Rohan & Willie John Kehoe from NPA HQ to the Opening Ceremony of National Ploughing Championships at the main band stand.  At 11.45am, The Embrace FARM candle will be lit prior to the opening ceremony of the National Ploughing Championship.

The epic journey began at Tullamore Show on August 12 with a tractor sponsored by W.R. Shaw, Tullamore to use on the drive.

The tractor has moved around the country, with approximately one county per day covered in its miles. The organisers received great support from Macra Na Feirme clubs nationally and Young Farmers Clubs of Ulster in Northern Ireland who came on board to drive the tractor and coordinate it within each county.

The tractor has been tracked by a GPS locator from Easytrack GPS Systems during its journey.

The tractor reaches its final parking place on Tuesday, September 18 for the opening of the National Ploughing Championships.

With the kindness of the National Ploughing Association, the tractor will partake in the opening ceremony on Tuesday morning being driven to the WR Shaw stand on Row 16, stand no. 334 where it will be on display throughout the week.

Throughout the 32 counties, Wellies have been placed in a link box attached to the tractor by families who have been affected by a farming accident.

These Wellies will be displayed at the Embrace FARM stand within the Health & Safety Authority Village at Block 4, Row 14, Stand 299.

Embrace FARM received its charity status in 2017, as part of the commitment to the governance of this it launches its first Annual Report on Wednesday 19th September.

Minister for Agriculture Michael Creed will launch the annual report on behalf of Embrace FARM in support of the work it does for the Agri Community.