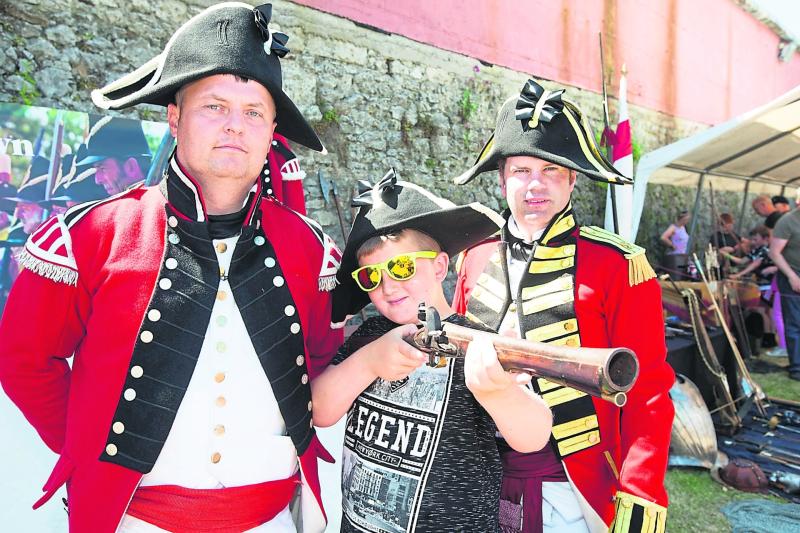 Heritage is at the heart of the Old Fort Quarter festival in Portlaoise this June and it aims to bring the history of that time to life in a fun and engaging way for young and old.

The heritage line up for the weekend is wide and varied and very much brings a medieval vibe to the Main Street.

Check out the amazing line up of heritage events included in this year's festival:

Scotia Living History Display – Come and see the weapons used by the Gaels in Greater and Lesser Scotia during mid to late medieval times. Talk to the team and find out how they were used and learn about the great battles of the past.

Raven Haven Aviaries - An educational display of native birds and birds of prey.  Find out about their role in medieval times and also about their habitats, feeding, nesting and how to identify them.

Dinah Cooking- Dinah will show us the food people ate in medieval times and also how it was prepared and cooked using 16th-century utensils and cooking methods.  Not a bit of electricity in sight!

Jude Stynes – Jude has a large display of medieval musketry, come along and see how these ancient weapons grew in popularity in medieval times.

Michael Moylan – Irish History Live - This living history experience will explore weaponry, dress, customs, and characters of medieval times.  Irish History Live is a mobile museum run by Michael Moylan. Children dress in period costume and handle tools, household items, weapons, and armour in the name of experiential learning. Michael will be on stage with his show at various times over the weekend.

CLAÍOMH Medieval Display - CLAÍOMH (meaning 'sword' in Gaelic) is a 'living history' group based in Ireland which re-creates a live and authentic image of medieval Ireland's past. The aspiration of the group is to spread awareness of Ireland's rich resources of Medieval & Early Modern history and archaeology through means of entertaining battle demonstrations, craft displays and palatable but informative talks with the aid of museum-quality reconstructions.

Medieval Hair Styles – get into the medieval mood with a hairstyle of the period.  Choose from a wide variety of styles.

Vikings Athy - Fergal Ryan and family will display Medieval Basketry, an interactive display where you can come along and learn how to make baskets as people did during the Medieval Period

Melissa Shiels has a broad range of knowledge and skills relating to medieval crafts such as textile-spinning, dance, song, weaving and sewing. She brings a range of historical periods to life including Early Christian, Viking, Norman, Medieval, Tudor and Georgian. Melissa has collected an impressive array of historical artefacts - including weapons, armour, textiles, games, jewellery, books, and clothes from different periods of history. Children can pass around and handle the artefacts and also learn old dances and songs and will have the opportunity to play some Medieval board games!

Old Fort Heritage Walks – Enjoy an informative and entertaining walking tour around the Old Fort and learn about its history and important sites that we all walk around in the 21st century without knowing the significance of the history of its past. Suitable for all the family.

Heritage Talks – Join the Laois Heritage Society for a series of talks on the Old Fort Protector and other important local histories.  A different talk will be given at 2, 3 and 4 pm in Kavanagh’s courtyard. An excellent opportunity to learn about the history of the town.

Children’s Heritage Treasure Trail – Bring the kids along and follow the clues on our children’s heritage trail. A fun and engaging way to teach them about local facts without them even knowing!

There will also be a medieval basketry display, shield painting and medieval dress and music throughout the weekend.

This rich heritage festival will also be complemented by lots of live music and entertainment on the two stages on Main Street as well as an artisan food market so give yourself a couple of hours to explore on Saturday, June 29 and Sunday, June 30.

A great weekend for all the family is guaranteed!