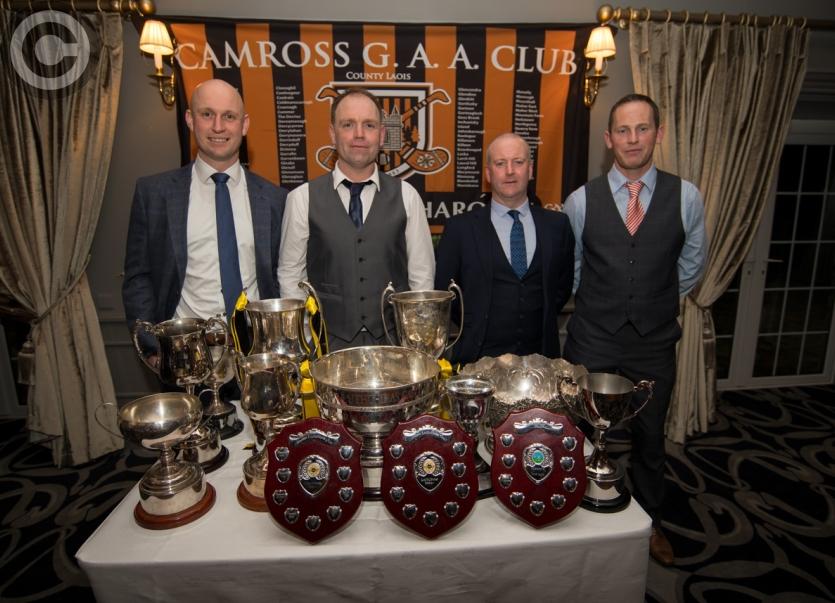 The Racket Hall Roscrea was packed for the GAA Dinner dance and presentation on last Saturday week where former Galway All-Ireland winning coach and Sunday Game pundit Cyril Farrell was guest of honour.

A historic year for the club having won the senior title for the25th time having claimed number one in 1959. Add in winning the Harry Gray cup and the last minor championship only their second such title. Add in Palmer cup and O’Bradaigh cups, football and hurling league titles and of course the ladies were present to display the Laois camogie trophy after a one year absence.

An impressive array of silverware was on display and adding to the occasion was the guest appearance of former Galway team manager Cyril Farrell appeared in four successive All-Irelands 1985 losing to Offaly, then losing to Cork but got it right in 87 beating Kilkenny and Tipperary a year later.

In that period he managed Connacht to three Railway cups and three National Leagues. He was moved on and amazingly the Liam McCarthy never crossed the Shannon again until last September. Cyril addressed the gathering and said he knew Camross hurling over many years and he was not surprised that the camogie girls had matched their male compatriots regaining the senior crown after a twelve months absence.

The Sunday Game analyst stressed that no player club or county should take anything for granted and you get out of hurling (the best game in the World the Woodford concurred) what you put into it and urged the players to heed their coaches and trainers at all times and said every other club out there will be looking to relieve you of your title.

Jack Cuddy thanked everyone for making the year the greatest in history and said the success of the juveniles was an indication the future of the club was great but hard work has to be done and now the club have excellent facilities. Presentations of medals were then made first to Camogie champions and their mentors followed by presentation of hurling and football medals to a long list of players.

Prior to the celebration PP Fr John Lalor remembered in prayers former Club Vice President Fr Donal Walsh who was laid to rest that day in his native Graignamagh and remembered two club stalwarts who passed away recently Michael Lalor of Cardtown and 1974 winning captain Christy Donovan who passed away on Friday and whose funeral took place last Wednesday.

Last Sunday evening the juvenile club held their presentation of awards in the Parish centre details in next week’s edition.