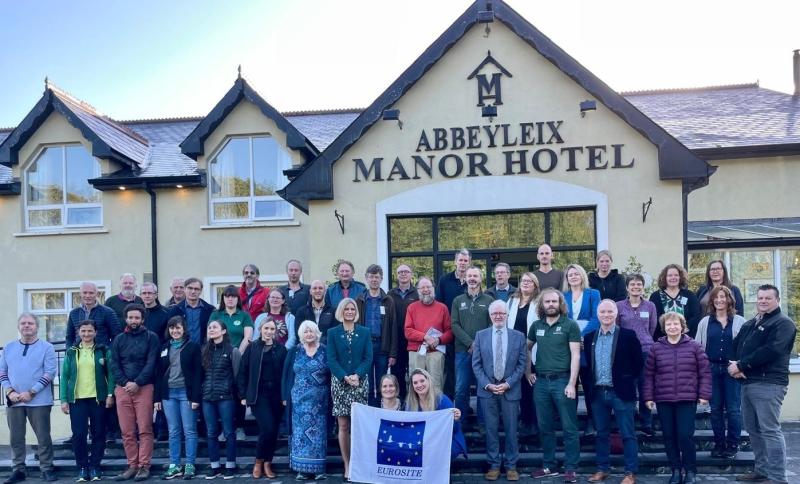 Abbeyleix was the hub for conservation experts from across Europe to see the work being done on wetlands around Ireland at the end of September.

On Wednesday morning the participants took part in a workshop at the Abbeyleix Manor Hotel to reflect on the site visits.

Garry Luttrell is Acting Chair, Abbeyleix Bog Project, which helped to host the event. He said all in the  Project were delighted to host such an international event.

“It’s a great endorsement of all the rehabilitation work going on at Abbeyleix bog and the amenity it provides,” he said.

The study tour is an initiative of the Eurosite Wetlands and Climate Change working group. It is hosted by the Community Wetland Forum in Ireland with support from the National Parks and Wildlife Service and the EPA.

It was supported by the Department of Housing, Local Government and Heritage of the Government of Ireland and made possible with the financial support of the European Union.

“It is through work like this on the ground by farmers across the country that we can begin to see real progress,” she said.”

Minister Hackett, who has responsibility for Land Use and Biodiversity, praised the Community Wetlands Forum and the Irish Ramsar Wetlands Committee for working to raise awareness of the importance of our wetlands.

Her comments focused on the part which farmers play in restoring wetlands, and follows on from the recently launched FARMPeat project, supported by her Department. This is an innovative, results-based scheme for farmers in the Midlands, who manage lands that surround some of Ireland's finest remaining raised bogs.

“It is the role of the farming community in protecting the network of those lower profile or unknown wetland sites across our landscape that I would like to highlight today,” she told the gathering.

“Although there is continued work needed on awareness, policy and protection for these sites there is also excellent work being carried out by our farming community on the ground.

“Techniques such as drain blocking and farm management practices that promote wetland restoration need that on the ground knowledge which farmers can provide.

"Other projects, such as the Wild Atlantic Nature LIFE IP, the Pearl Mussel Project and Hen Harrier Project all employ specifically adapted locally led results based agri-environmental schemes to benefit habitats and species.

“This locally led and landscape scale approach means that farmers truly are at the heart of wetland habitat restoration and protection in these areas as they learn how best to sustainably manage their land through the support of the scheme,” she said.

The gathering was also attended by Heritage Minister Malcolm Noonan who paid tribute to the work the National Parks and Wildlife Service, state agencies, environmental organizations and local communities.