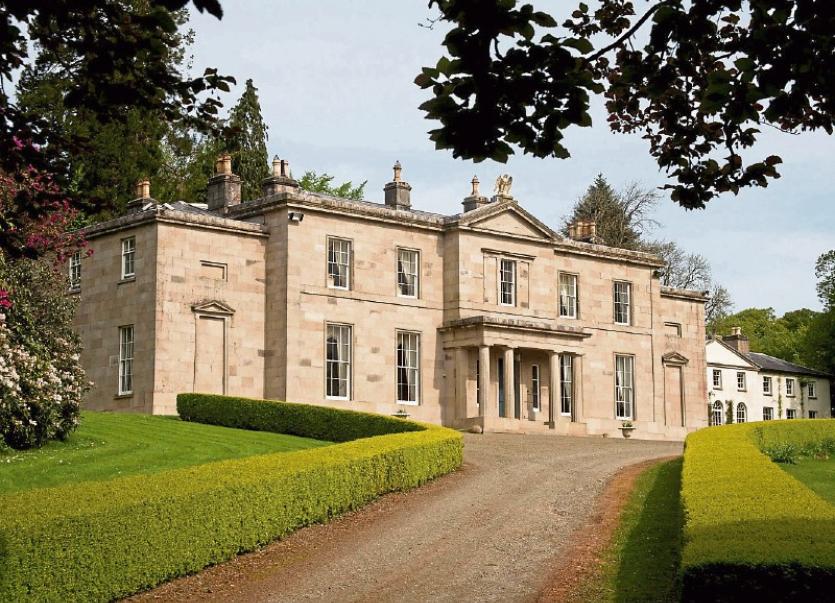 Capard House in Laois near seldom featured on the trail of the travel writer or gazetteer, only briefly attracting attention during its elaborate construction in the late 1790s.

In many respects, Capard remained unknown to the outside world and lay in the shadow of the other great houses of Laois. However, Capard was central to the social, economic and political life of Rosenallis and the wider community over several hundred years. 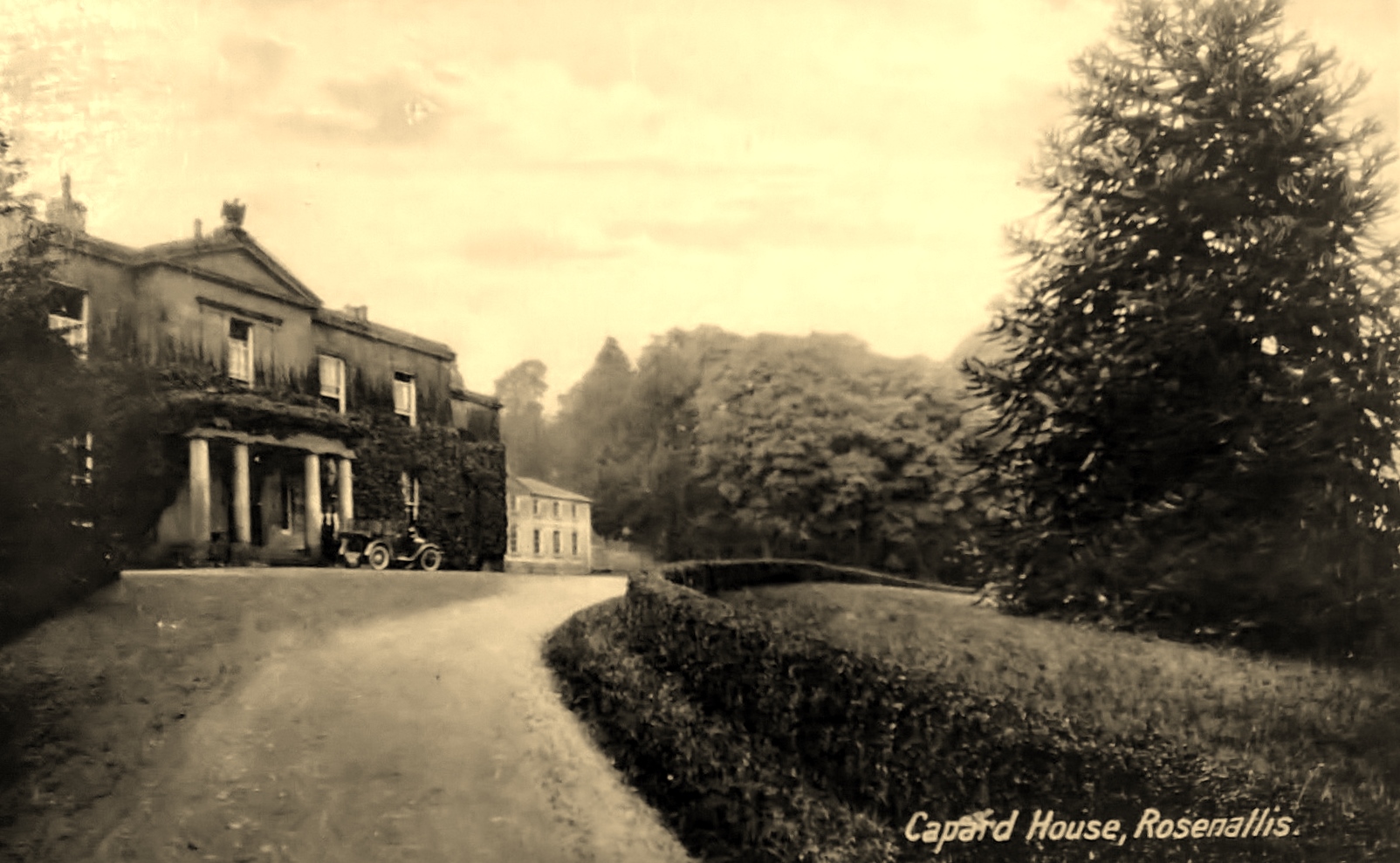 Since 2015 Capard has undergone one of the largest restoration projects of an Irish country house to date. This book charts the history of Capard House and estate from the arrival of the Pigott family in Ireland in the 1560s to its present-day restoration. Lavishly illustrated throughout, the story of Capard challenges many of the stereotypical interpretations of the Irish country house.

The story of Capard House, whose history stretches back to the 1620s when the Pigotts were first granted land outside Rosenallis is one of survival and renewal. Following periods of decline, members of the Pigott family renewed the fortunes of the house and estate. The present house at Capard dates to the 1790s when John Pigott commenced one of the largest building projects in the country. Employing over 200 local people in the process the building of Capard was interrupted by the onset of the 1798 rebellion and for some years the house lay unfinished.

Exactly 98 years ago next month, in July 1922, Capard House was rattled by the sound of incessant gunfire as the house played host to one of the opening salvo’s of the Irish Civil War.

In the Rosenallis area the approaching Irish Civil War in 1922 brought about considerable unrest, particularly in relation to the division of land. When the Civil War hostilities commenced in late June, the Anti-Treaty IRA quickly moved and seized Capard House. The objective of the Anti-Treaty IRA was to hold a defensive line stretching from Dublin to Limerick as they prepared for the Free State, or National army, to advance.

The Slieve Bloom Mountains, and by extension Capard, provided a significant defensive position to do so. Under the direction of Lar Brady, Officer Commanding of the Laois (Leix) IRA, in early July more than sixty Anti-Treatyites were billeted in the house.Tensions ran high as the Free State army in Maryborough waited on their chance to attack. However, with the Civil War only a matter of days old they were reluctant to do so. An indication of the Anti-Treatyites optimism in holding Capard can be seen by the fact that they allowed Edward Kenny and his family to remain in residence, ultimately ensuring the safety and survival of the contents of the house. In order to secure their position Brady ordered that four large trees were to be felled on the avenues, but in doing so caused large breaches in the demesne wall.

Initially appearing to surrender, Gorman raced towards the house closing the front door and alerting those inside of what was happening. Two Lancia armoured cars proceeded up the main avenue firing relentlessly on the house. Simultaneously, an attack was made from the rear of the house from the Ballyhuppahaune direction.

Parking in front of the house the armoured cars continued to fire, peppering the building with bullets. Michael Sheehy, an Anti-Treaty soldier, later recalled that the plaster fell around them as the bullets hit the wall in the room where he was sleeping. The Anti-Treaty forces inside were completely overwhelmed only occasionally returning gunfire. Under intense fire, Paddy Bray was selected to fire at the armoured car, but made little impact.

Throughout the morning rifle and grenade fire battered the house. Huddling for safety Edward Kenny and his family made their way to the silver safe where they remained during the bombardment. Such was the barrage, one shell was said to have left a ‘crater’ in the roof.

Lasting over four hours, nearly every pane of glass in the house was shattered and bullets peppered the façade. A number of Free State officers were injured in the stand-off including Patrick Mulcahy, a brother of the Minister for Defence, Richard Mulcahy, was shot through the hip, and Sergeant Houlihan who was shot in the foot. Having expended their ammunition, and with no sign of breaking through the Anti-Treaty defences, the Free State army retreated for Maryborough. Although surviving the onslaught, the attack on Capard was a blow to the Anti-Treaty IRA as they lost their stranglehold on the area and for months after Free State troops openly patrolled the mountain and the Rosenallis area in general.

Below: Edward Kenny Senior who was present at Capard during the attack. 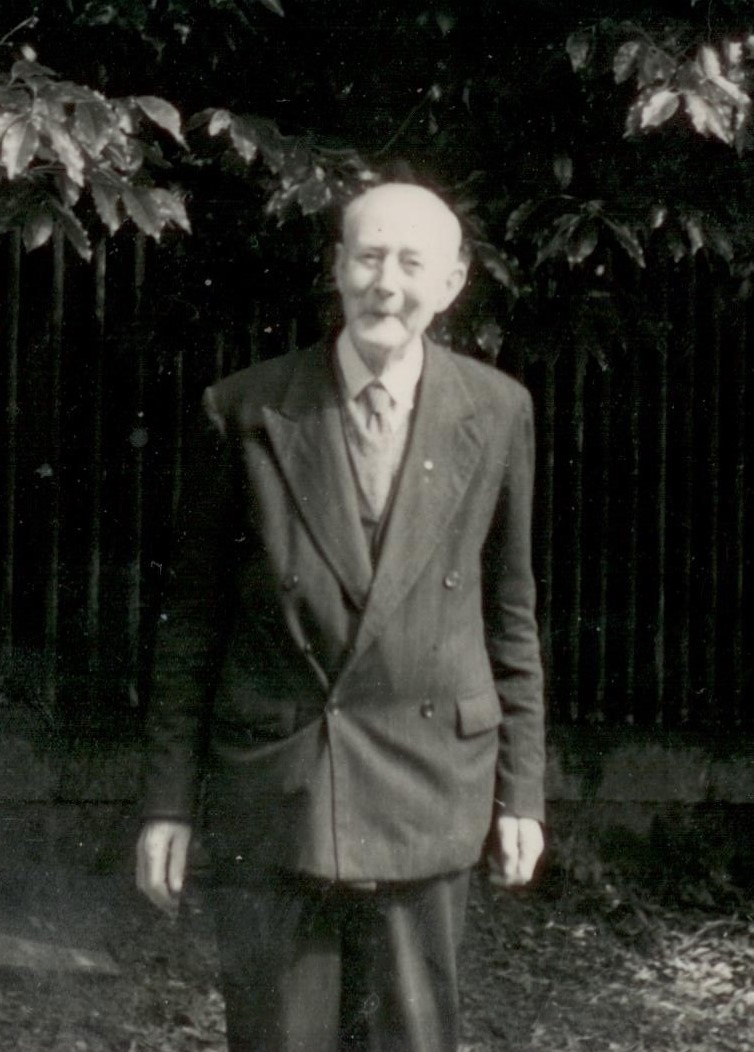 With Capard virtually crumbling around them, several Anti-Treatyites decided to make their escape from the house including Denis Dwyer. As he made his way out the back door and towards the farmyard Dwyer was shot by Free State forces; bullets which he was carrying in his pocket exploded upon impact, killing him instantly. According to his death certificate he died of ‘shock and haemorrhage’ and that ‘death was instantaneous’. Given the intense gunfire which had lasted for over four hours, it was remarkable that there was not further loss of life. It was later claimed that a freshly dug grave in the mountains suggesting that there had been other fatalities at Capard, but it seems unlikely that the Anti-Treaty IRA in these initial stages of the war would have denied fatalities, instead using it for propaganda purposes.

As the gunfire subsided and the smoke cleared, members of the local community timidly approached Capard to survey the wreckage. Emerging from a large silver safe in the house Edward Kenny went out into the yard where he found Dwyer’s body fifty metres from the back door; the spot marked today by a small iron cross and memorial stone. A man named McEvoy agreed to bring Dwyer’s corpse on a horse and cart to ‘auld John Moloney’ and according to local lore ‘they doctored him up before they brought him home’. Worried that the body would be captured by the Free State military, thus denying the opportunity of a burial, it was hastily brought across the mountain and conveyed under escort to his home at Shanrath, Wolfhill, near the village of Ballylinan, almost thirty miles away. On Friday morning 14 July, after requiem mass at Wolfhill celebrated by Rev W. Wilson, Dwyer was buried in the adjoining cemetery. Three volleys were fired over the grave which was quickly filled in. To his parents and friends, Dwyer had sacrificed his life ‘while fighting for the Republic at Capard’. Writing to his parents, Lar Brady noted that ‘poor Denis died bravely and courageously and his death will be an inspiration to his comrades’. Others offered their sympathy assuring his parents that ‘his name is now added to the long roll of new martyrs’.

Later that day William Bailey, the land agent who administered the estate for the de Jenner Pigott family went to Capard to inspect the building where he was assured by senior officers that nothing had been stolen. In particular, and as reported by national newspapers, the so-called ‘Articles of Limerick’ which had hung in Capard since the 1690s were untouched.

However, Bailey was aghast to find that the house had been almost gutted by machine gun and rifle fire. In his official report for compensation Bailey outlined the nature of the damage, noting that no room had escaped and that over 220 panes of glass were broken. The roof of the house was ‘considerably damaged’ by hand grenades and the interior and exterior walls damaged’. In every room broken stucco and cornices dating from the 1790s were damaged. The glass dome over the staircase was shattered, while the library, had been simply ‘riddled’ with bullets. A number of household items were completely destroyed including a maple wardrobe, a mahogany chest of drawers, a mahogany dressing table, four mattresses and two portraits of members of the Pigott family. Bailey also noted that the ‘stonework on the front of the mansion was irreparably damaged’. £300 compensation was sought and in addition, £50 for the repair of the demesne wall where the felling of trees had caused extensive damage. In total, the claim for compensation amounted to almost £1,100.

However, as the repair work commenced, it was decided not to fully restore much of John Pigott’s early-nineteenth-century design. In an effort to speed up the proceedings and to save money, William Bailey looked for an ‘architect’s certificate’ to be issued meaning that no qualified person from the Office of Public Works visited Capard to oversee the restoration. Instead, the project was overseen by local builders, Joseph Nolan, a slater and plasterer, while the interior repairs were carried out by the Lynch brothers from nearby Mountmellick.

By this stage temporary work to secure the building had been carried out but the house had suffered further damage after heavy rainfall. In particular, the wallpaper in the bedrooms was damaged. As late as 1926 Bailey was still awaiting compensation in order to pay the builders for the work they had carried out. The work was obviously completed when Capard was leased for two years to a Mr and Mrs Johnstone in 1926.

The ‘Battle of Capard’ was long remembered and came to define the military careers of a number of participants. While some chose not to speak about their involvement in the Civil War, others recalled with some degree of pride the fact that they had been active ‘in the defence of Capard’. For almost thirty years after the ‘Battle of Capard’ the death of Denis Dwyer was commemorated annually in Woflhill and in 1932 a Celtic Cross was erected over his grave where the veteran IRA leader Tom Brady spoke. 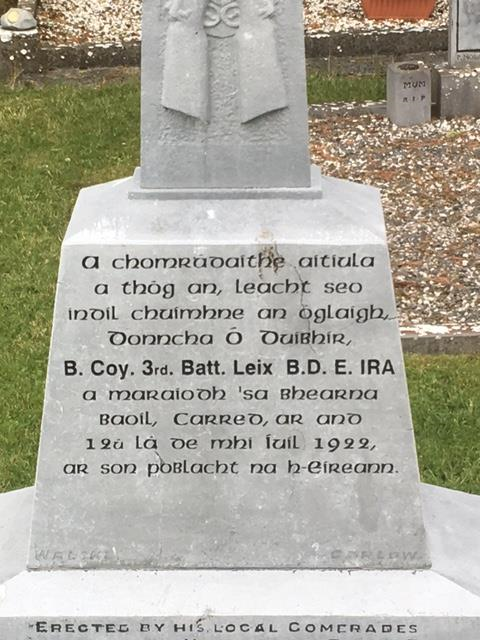 For many years members of Dwyer’s family made the pilgrimage to Capard while also attending the Easter Commemoration in Mountmellick. To the rear of Capard House a simple metal cross and stone today marks the spot where Denis Dwyer fell. The cross has been faithfully attended to over the years by the staff and owners of Capard. Today, the scars of the ‘Battle of Capard’ remain. Visible on the façade of the house are 189 bullet holes, which act as a lasting reminder of that July morning in 1922.

While the ‘Battle’, or skirmish, has been largely lost in the historiography of the Irish Civil War, its importance to the story of Capard is underlined by the fact that successive owners have not repaired the façade despite several renovations to the house in the intervening period.

Below: Mary Pigott, daughter of John Pigott who built Capard in the 1790s 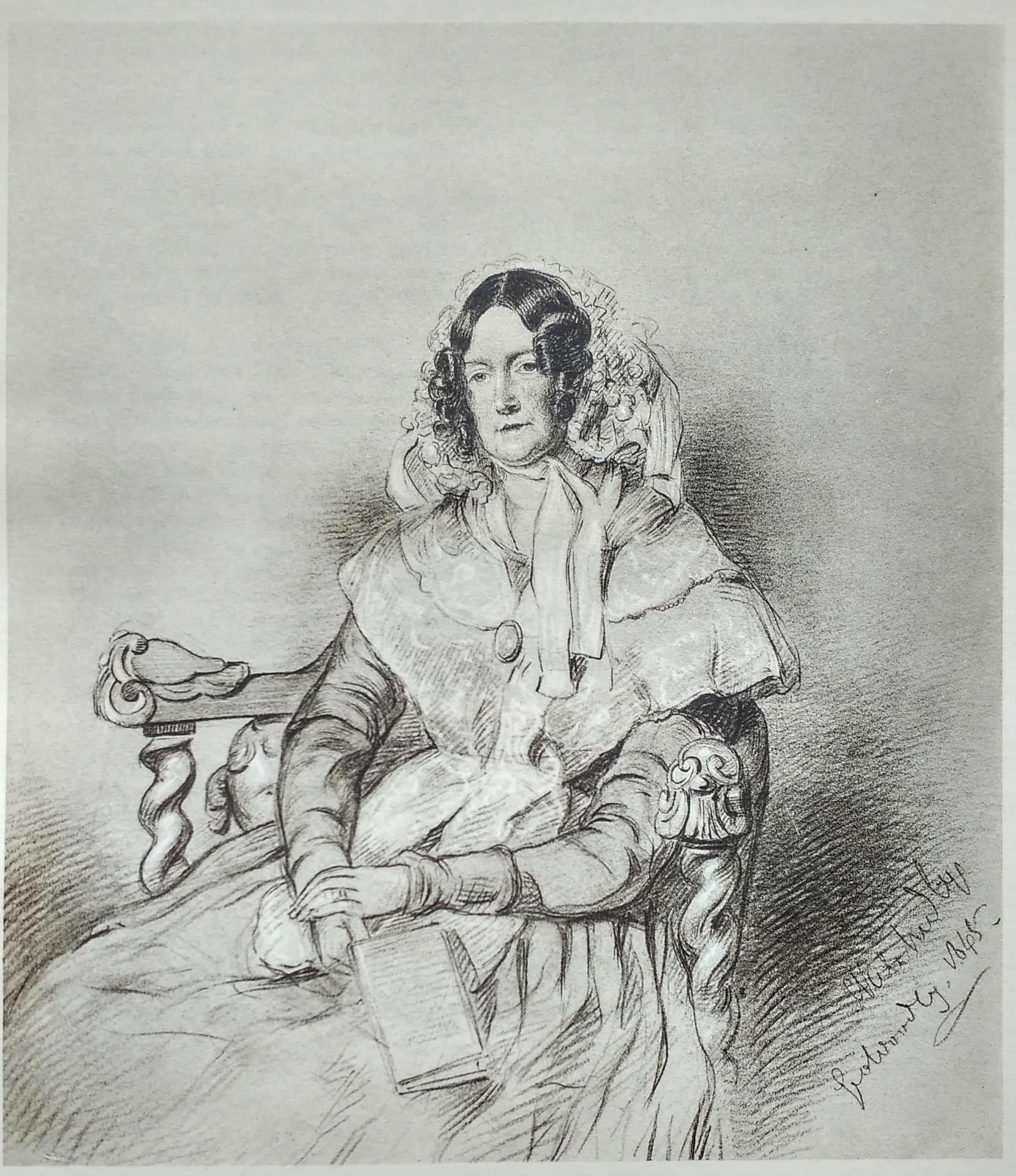 Ciarán Reilly is a historian of 19th and 20th century Irish history based at Maynooth University. His books include The Irish Land Agent, 1830-60: the case of King’s County (2014); Strokestown and the Great Irish Famine (2014); John Plunket Joly and the Great Famine in King’s County (2012) and Edenderry, county Offaly and the Downshire estate, 1790-1800 (2007), all published by Four Courts Press.

The book is available through the Irish Georgian Society https://shop.igs.ie/products/ 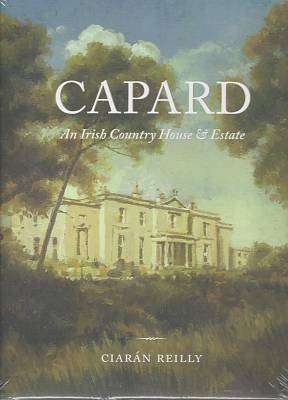