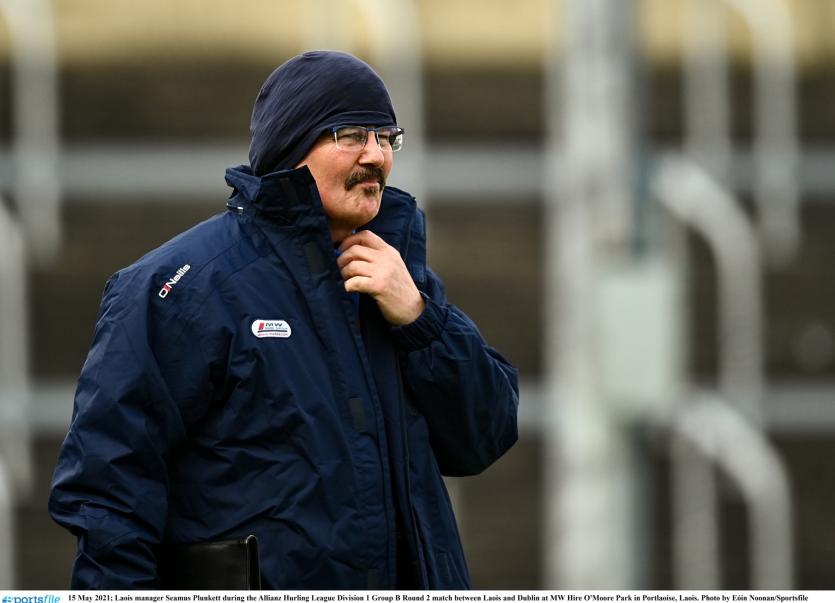 Laois hurlers open their 2021 championship account on Saturday when they travel to Nowlan Park, Kilkenny to take on Wexford. Given the year they have had to date, Laois will go into the game as the strong outsiders but manager Seamas Cheddar Plunkett insists his injury plagued and wounded troops will be ready to go to war in the blue and white of Laois.

Laois have had rotten luck with injuries so far this year and they lost two more key men in their last game against Antrim with Diarmuid Conway and John Lennon now both ruled out of the Wexford clash to add to the casualty list that also includes Mark Kavanagh, Eric Killeen, Ronan Broderick, Podge Delaney.

Plunkett is hopeful that Stephen Maher, Willie Dunphy and Ryan Mullaney will all be available for the clash against Davy Fitzgerald's Wexford.

“It was great to have Willie Dunphy back the last day but it really is rehab while they are hurling and it is not ideal. It's one thing getting these lads back but they won't have two months hurling behind them.

"The most disappointing thing from the Antrim game was that we lost two more players. Diarmuid Conway is out now with a bad injury to his ankle.

“John Lennon had rehabbed so much over the last 12 or 14 months. He is a fantastic man and leader in the team, he came on and played 10 minutes and broke down again. He put so much into it and it is very disappointing.

“It seems to be one of these years. We should all be able to carry two or three injuries but what has happened to us is very unusual for any team.

“It is a blow to take but we will take it and move on. We will be turning up ready for battle on Saturday evening.”

Wexford are further down the line in terms of their development while Laois have endured a miserable league campaign and have a relegation play off against Westmeath to come later in Summer.

Reflecting on the year to date, Cheddar Plunkett admits that with Covid, injuries and being a new management team, it has been a really tough gig to try get things right.

“You go out to win every game. It is a competitive league and there are teams in that would consider themselves potential All Ireland winners.

“It has been a very difficult year and we only had about two weeks collective training before that first league game against Wexford.

“People forget as well that things like been able to meet the team and communicate with the team, even down to meeting lads one to one, we couldn't do it with the regulations.

“So we had to cram all of that into a couple of weeks. We only had one weekend free in the league in the five weeks also and that wasn't ideal either especially being a new management.

“All that was compounded then by the amount of injuries we had. We were continually changing the team and not getting that consistency into our play.

“We are trying to rehab players back into hurling as well and giving them 30 or 40 minutes.”

One aspect they will have to improve on is their accuracy. The last game against Antrim saw them score 1-22 but they could have easily broke the 30 point barrier had they got their eye in.

The Laois boss agreed that it is an area that they have fell down on so far this year.

“Our shot execution needs to improve. We have hit a lot of wides. Wides are one thing but some of them were at crucial stages in the games. We will be looking to improve on that as we go along.

“It's all about getting it right on the day now and I think we will be ready for Wexford.”

While understanding why Wexford are favourites, he doesn't view the gap between the teams to be as big as some might think.

“Context is important too. I think we beat Carlow by a point last year to stay in the division and lost heavily to Wexford also in that league so we know we have ground to make up on Wexford when you bear in mind last year's league game and our first league game this year.

“It is Davy's fifth year with Wexford and there is a lot of value in that. They are a team that are mentioned as a potential team that could come through and challenge for an All Ireland. There has never been much in it when it comes to Laois and Wexford in championship hurling.

“The results in the league in the last two years shows we have ground to make up but I absolutely believe we can make it up and I believe that we will be ready for Wexford on Saturday.”