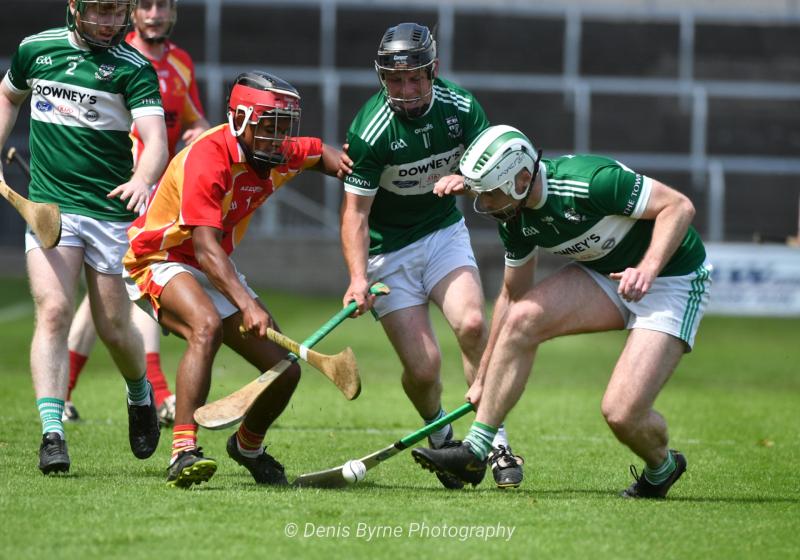 The Harps were crowned 2020 Junior 'A' hurling champions in glorious sunshine on Sunday as they defeated Portlaoise to bring home the silverware.

Played in O'Moore Park, it was an exciting and entertaining game from start to finish with the result up in the air right up until the final whistle

On the balance of play, The Harps probably deserved it and as they never fell behind in the game but credit Portlaoise who can rest easy knowing they left everything out there.

The Harps were first out of the traps in the second minute when wing back Rian Edwards cut over a line ball to set out their stall. Portlaoise replied with a free from Keith Murphy but it was The Harps who were making all the early running.

Brian Clancy and Stephen O'Brien floated over two delightful scores and by the first half water break they had built up a commanding lead - 1-5 to 0-2. The goal came in the 13th minute after Darren Maher fed Ross Young who made no mistake and firing to the back of the net.

They could have had another a minute later but for a super double save from Portlaoise keeper Philip Roche. The Harps were much slicker in the early stages but it was the Portlaoise men who made the better start to the second quarter with Murphy landing another close range free while centre back Darragh Rigney lobbed over a free from inside his own half to bring it back to 1-5 to 0-4.

The Harps wrestled back command and woke from their brief slumber with two points on the spin from Conor Deegan and a superb long range effort from Eoghan Delaney.

As the sides traded scores coming up to the break, it looked like The Harps would go into the break with a comfortable lead but Portlaoise had another kick in them before the half time whistle.

Daniel Delaney reached to the clouds to catch a puck out, made his way in as far as 25 metres from goals and off loaded to Lorcan Duff who kicked to the net for Portlaoise.

The gap was down to four but with the last puck of the half, Ross Young fired over a free to leave The Harps with a 1-10 to 1-5 advantage at the interval.

After an early trade of scores in the opening minutes of the second half, the game hit a scoring lull with both sides guilty of poor wides and a lack of composure in front of goals.

Portlaoise were sneaking back into it and had it back to a three point game again after Cian Dowling Byrne fired over but every time they got it back to a one score game, The Harps seemed to be able to pull away again.

Ross Young landed a long range free before a rousing score from Stephen O'Brien had the vocal Harps crowd on their feet after he caught, turned and fired over the black spot to leave it 1-13 to 1-9 at the second water break.

Portlaoise once again brought it back to a three point game but Ross Young landed his first point from play on 51 minutes to stretch The Harps lead again.

Now in the final 10 minutes, the game was still there for both sides. Niall Carey pointed for Portlaoise to make it 1-14 to 1-11 and back to a three point game but Portlaoise had a golden opportunity for a goal only for Sean Culleton to mishit his shot.

Keith Murphy landed another free right on 60 minutes to make it a two point game but Ross Young added to his personal tally with two more frees in injury time to leave the final score 1-16 to 1-12.