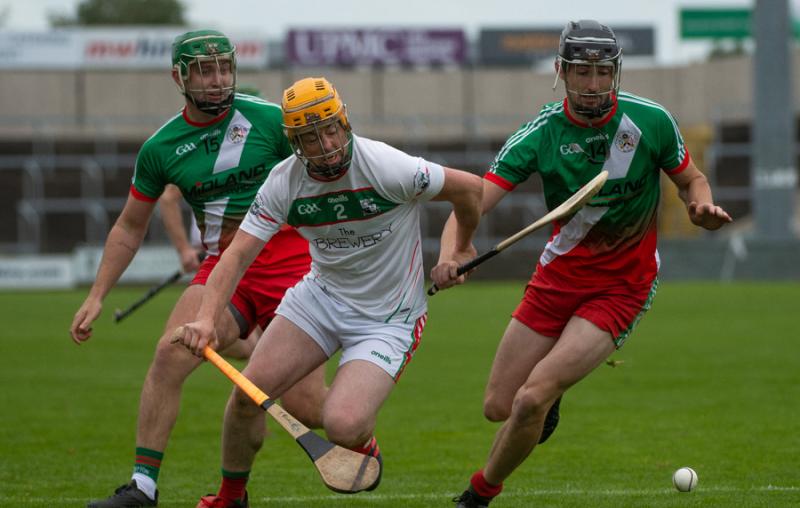 Rathdowney-Errill added more silverware to their 2021 collection as they defeated Borris-Kilcotton by nine points on Sunday afternoon to claim the Laois senior hurling league title to add to the Intermediate league title they won on Friday night.

Shane Keegan's charges were deserving winners with Paddy McCane and James Ryan leading the way in a high scoring and entertaining encounter.

Dylan Carroll opened the scoring with a free for Rathdowney-Erill but Borris-Kilcotton began to find their range in the fourth minute with Joe Campion firing over before a PJ Scully free put them 0-2 to 0-1 ahead on seven minutes.

Neil Foyle added another one with the next attack but a super move in the ninth minute saw Rathdowney-Errill hit the net. Paddy Purcell sent in a pin point diagonal ball and with a super catch, Brandon Ginley turned his man and fired to the top corner.

Joe Campion did reply with a fine score, his second of the game but as the game edged towards the water break, Rathdowney-Errill added three more scores through James Ryan, Carroll and a skillful Paddy McCane point to see them lead 1-5 to 0-4 at the water break.

They hit the next two after that break through Jack Kelly and Brandon McGinley as they began to dominate the game. Paddy Whelan struck one over from distance for Borris-Kilcotton to break the cycle but Brandon McGinley was a man in form and his score along with a neat score from James Ryan pushed them into a 1-9 to 0-5 lead on 23 minutes.

Borris-Kilcotton needed something to happen and fast. They responded in style with the next three scores. PJ Scully clipped over a free while Joe Campion and Colm Stapleton also tagged on scores to bring it back to a four point game with five minutes left in the half.

Anything Borris-Kilcotton could do, the men from Rathdowney-Errill could match and they then hit three in a row, the pick of those from Paddy McCane to restore a seven point lead as half time approached.

Both teams traded scores before the break before PJ Scully did have a half goal chance but after that wasn't converted, play was called back for a foul on the same player and Scully fired over to get the last score of the gap and cut Rathdowney-Errill's half time lead down to six points - 1-13 to 0-10.

Borris-Kilcotton got the dream start to the second half when PJ Scully rifled to the net with the second half just 23 seconds old. Dylan Carroll replied with a free but Borris-Kilcotton went on a march firing over the next four scores to bring the game level. Aaron Dunphy landed two brilliant scores with Colm Stapleton and Scully also adding to their tallies to make it 1-14 to 1-14.

Dylan Carroll added a badly needed score for R/E and that set them off again. James Ryan came into his own hitting three points in the space of five minutes while also setting up a goal for Ross King to put his side in control again.

With the game been level on 40 minutes, Rathdowney-Errill found themselves 2-19 to 1-15 up a mere seven minutes later at the second water break.

Aaron Dunphy got one back for Borris-Kilcotton just after the water break but two in a row from Paddy McCane and one from distance from Daithi Poynton left eight points between them with eight minutes to go.

PJ Scully did his best to keep his side in touch with a sideline cut and a free but late scores from Ray Bowe, Padraig Rafter, Shane Dollard and Paddy McCane put an exclamation point on the win with Rathdowney-Errill winning out by nine points and completing a Senior and Intermediate league double.