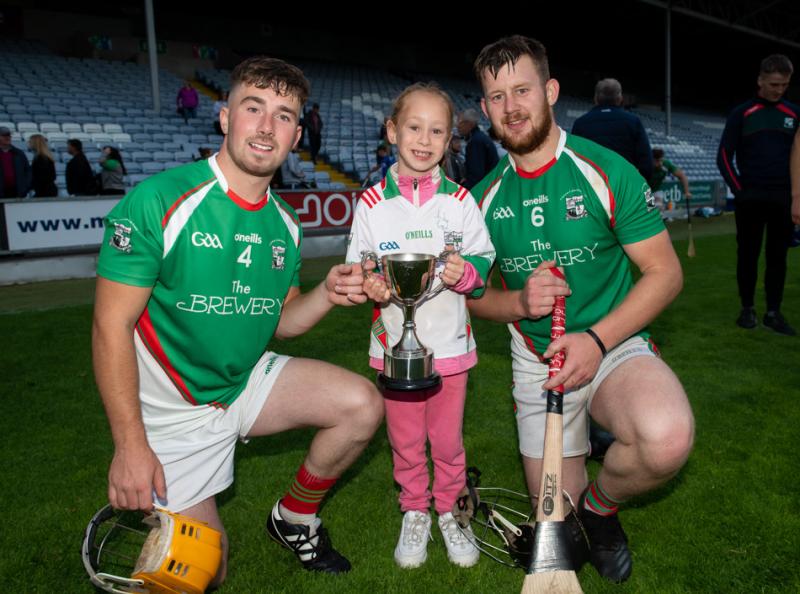 Rathdowney-Errill are the ACHL Division 1B champions after the edged-out neighbours Clough-Ballacolla in an entertaining final at O’Moore Park tonight.

After a closely contested opening to the game, it was Rathdowney-Errill, with wind advantage, who opened up a lead.

Shane Dollard had initially put them ahead inside of 20 seconds, with Cillian Dunne responding with a brace from placed balls to put Ballacolla in front. Kevin O’Dea then launched one over from distance to level the scores and precede a flurry of scores for the men in green.

Shane Madden put them back in front and Dylan Carroll landed a free before the opening goal of the game arrived, and an impressive score it was too. Shane Madden showed impressive pace to advance down the left wing before playing in Padraig Rafter. He in turn showed good awareness to pick out Ray Bowe in the penalty area and he made no mistake with an emphatic finish from close range.

Rafter then raced away down the left wing to score a superb point and the gap was suddenly out to six. Clough-Ballacolla needed to respond and they improved a bit over the next few minutes, outscoring Rathdowney 0-3 to 0-1 either side of the water break.

That got them within four, but Rathdowney-Errill finished the half strongly. Dylan Carroll added three frees while Shane Madden, Rafter and John Carroll also hit the target to see them 1-12 to 0-7 ahead at half time, leaving Clough-Ballacolla with plenty to do.

With a large deficit to erode, Clough-Ballacolla got to work early on the restart, helped by a goal from Canice Coonan after Cillian Dunne’s block and quick thinking set him up. Coonan then added a point and Kevin Mulhall chipped in with another as Ballacolla enjoyed their most productive spell of the game.

A Cillian Dunne free made it 1-3 without reply and just two separated the teams, with the challenge firmly laid down to Rathdowney-Errill. It was their turn now to fashion a response and they did in unlikely circumstances. Danny Hanlon was dispossessed of the ball on the left wing as he came out to make a clearance, with Shane Madden playing a deft shot back over his head to nestle into the back of the net.

In keeping with an increasingly fast-paced second half the Ballacolla response was swift. They worked the ball to Padraig Brennan on the edge of the area, and through a forest of bodies he managed to thunder a shot to the back of the net.

Jordy Kavanagh replied for Rathdowney-Errill with a point before Shane Madden then set Dylan Kavanagh up for yet another goal, his powerful shot from 10 yards giving Danny Hanlon no chance.

That score sent Rathdowney-Errill six ahead and it proved to be enough breathing room to see the game out for the final quarter. That’s not to say it was any less competitive, with Ballacolla throwing everything they had at them, but in the end, a late Dylan Carroll free put the seal on a well deserved Rathdowney-Errill win.