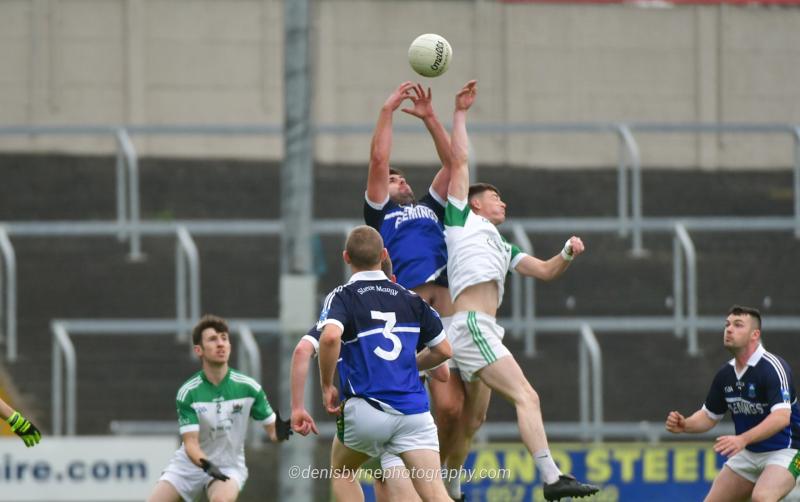 In what was probably seen as a crucial first round match-up between Rosenallis and Ballylinan in order to avoid any relegation concerns for the year, it was the Rosenallis men who had that little bit more against a side who missed Gary Walsh through suspension.

The game was level with 55 minutes played in O'Moore Park, but a Paddy Keating goal towards the end booked Rosenallis' place in the winners section of the draw.

Rosenallis made a dream start, as wing-forward Donnagh Callaly fired a rocket of a shot into the top left corner of the goals from a ways out.

Callaly continued to strut his stuff, as he curled over a lovely point moments later. Ballylinan began to grow into the game after that, with Alan Farrell firing over heir first point, and then midfielder Cathal Dunne converted a 45'.

Rosenallis were playing the better football though, as Laois Senior footballer John O'Loughlin landed a beauty from distance to extend the lead. While Ciaran Farrell converted a close-range free for Ballylinan, they conceded a second goal a few minutes later after a super team move from Rosenallis.

Eoin Dunne fielded Donal Lawlor's kick-out and quickly looked up to spot the run of Jack Friel in space. Friel found Ronan Murray, who offloaded to the onrushing Joey Shelley, and Shelley found the top right of the net with a superb finish.

Ronan Murray knocked over a free for Rosenallis after that, but Ballylinan bounced back with an important goal just before the first water break. Cathal Fennessy received the ball at pace from Cathal Dunne, and Fennessy played a one-two with John Kealy on the edge of the square, before Fennessy blasted to the net.

A few minutes after the water break and Rosenallis threatened a third goal. Jack Friel looked like he was played in, but Ballylinan keeper Tom Wright was alert to the danger and cleared it out.

Ballylinan continued to suffer from poor shot selection as the half wore on, and Ronan Murray added his second to extend Rosenallis' advantage. Ballylinan did bring the game back to a three-point one, as Andy McEvoy's free came off the post, but John Kealy gathered the rebound and gave it to Ciaran Farrell, who duly put it over.

Ciaran Fennessy fired over another for Mick Lillis' charges, as they reduced the gap back to two points. Rosenallis' corner-back John Maher then took it upon himself to make a burst up the field and knock one over from close-range.

On the 30th minute mark, Andy McEvoy swung one over with his left boot, and then Ciaran Farrell played a quick one-two with Podge Walsh from a free before curling over. That was the final score of the half, as Ballylinan trailed 1-7 to 2-5 at the interval.

Ronan Murray added another free to his tally upon the resumption of play. Referee Maurice Deegan the instructed Ballylinan manager Mick Lillis to the stands, and threw the ball up between John O'Loughlin and Seamus Lacey on the Ballylinan 45'.

Lacey managed to get a flick on and Ballylinan went on the counter-attack at pace. Seamus Lacey, Kevin Byrne and Alan Farrell were all involved in a move which culminated with John Kealy splitting the posts.

Eoin Dunne grabbed his first score of the day after that for Rosenallis, as he kicked high and over the bar to keep his side two to the good.

However, Ballylinan were beginning to assert their authority in the middle of the park, with the likes of Seamus Lacey, Alan Farrell and Cathal Dunne winning possession from kick-outs. Dunne cut the gap back to just a single point once more, as he managed to curl over a superb score despite being under pressure from the Rosenallis backs.

Ballylinan almost got in for their second goal on the 40th minute mark, with Alan Farrell finding Larry Kealy, but Kealy had his shot well smothered by Rosenallis shot stopper Donal Lawlor.

Ronan Murray was causing the Ballylinan back-line all sorts of problems, as he earned a close-range free by running at the defence, which Colm Poole tapped over. Murray then kicked another excellent point from play to leave three between them once more.

However, Ballylinan responded with an unbelievable Cathal Dunne goal. Dunne received the ball near centre and went on a powerful run that ended with him bursting the back of the net with a bullet into the top left.

Eoin Dunne settled Rosenallis down by kicking over a fine point from distance, as Rosenallis held a slender 2-10 to 2-9 lead during the second water break.

Both sides were guilty of kicking poor wides after the break in play, as we entered the final ten minutes and things got cagey. A crucial moment came when Murray had his shot brilliantly blocked by Ballylinan's Padraic McEvoy, and that turnover resulted in Andy McEvoy converting a free to level proceedings.

Rosenallis could have sealed the win with five minutes to go, but Paddy Keating didn't connect with his shot and it went wide of the goalposts.

Andy McEvoy edged Ballylinan in front, but Rosenallis replied through Aodh Bowes and John O'Loughlin points to go back into the lead. Then they did seal the win, as Keating atoned for his earlier miss to crash the net.

Eoin Dunne pointed the insurance score, and Rosenallis had come out on top of a thriller to advance and send Ballylinan's to the losers' section.