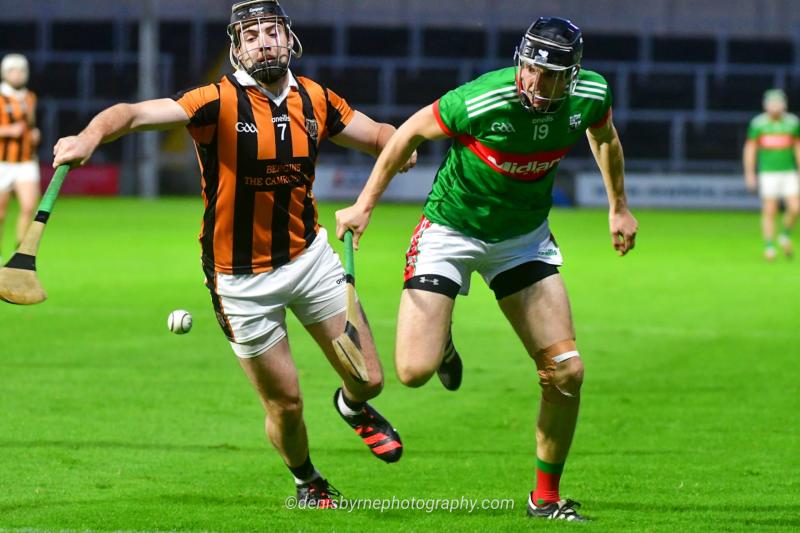 Camross are into the Premier Intermediate hurling semi final after they outclassed Rathdowney-Errill on Saturday evening. Niall Bennett was sprung off the bench at half time and helped himself to 1-2 with his goal seven minutes from time sealing the deal.

Rathdowney-Errill had their goal chances just before the second water break but they were spurned while Jordie Kavanagh also picked up a straight red card in that spell that ultimately signalled the end of their challenge.

It was a slow enough start to the second semi final of the evening on Saturday as both teams looked to gain an early advantage. Eoin Burke floated over a free from inside his own half on four minutes for the opening score of the game but a minute later, Darrell Dooley pointed from out on the sideline to draw the sides level.

A quick burst of two points for Rathdowney-Errill courtesy of Jordie Kavanagh and Paddy Hassett them them an early edge but Camross were making chances. They were wasteful at times but Colin Palmer did bring the arrears back to the minimum on eight minutes.

Jack Foyle and Dan Delaney (free) exchanged points before the water break but it was the Rathdowney-Errill men who edged the first quarter - 0-4 to 0-3.

Camross levelled the game straight after the water break through another Dan Delaney free but in truth, the game hadn't come to life even with 17 minutes on the clock.

The remainder of the half saw more of a spark from both teams. Points from Dan Delaney and a second for Darrell Dooley reversed the deficit for Camross and put them into the lead before Rathdowney-Errill came with a burst of their own with points from James Keegan and Paddy Hassett (free) to put them into an 0-6 to 0-5 lead.

With seven minutes left to the break, Camross began to steal a march with Dan Delaney to the fore. He landed one from play along with a free while Tomas Keyes got two in the space of a minute to hand them an 0-9 to 0-7 lead coming up to the half time whistle.

There was time for R/E to get a point back with Hassett nailing another free to leave Camross only leading by one at the break, 0-9 to 0-8.

The opening half may have been slow to get going but there was no shortage of scores as the second half swung into action. Niall Bennett was introduced at half time for Camross and it took him just 22 seconds to get the opening score.  Tomas Keyes followed that up with a free as the Camross men led by three.

Paddy Hassett kept Rathdowney-Errill in touch but a super score from Robert Delaney put Camross three up again. Rathdowney-Errill then spurned two goal chances. Ray Bowe's effort was saved by Cillian Tiernan before the Camross netminder then saved a penalty from Eoin Burke.

It got worse for Rathdowney-Errill in the aftermath of that penalty miss when Jordie Kavanagh received his marching orders on a straight red card for an off the ball incident.

A frantic few minutes was concluded with Camross adding two points in the space of a minute from Niall Bennett and Darrell Dooley as Camross led 0-14 to 0-10 with 16 minutes left.

Paddy Hassett drove over his sixth just before the water break but Camross still led by three coming into the final quarter.

The result was put beyond doubt with seven minutes to go as Tomas Keyes fed Niall Bennett and the substitute made no mistake in finding the net to make it 1-15 to 0-11.