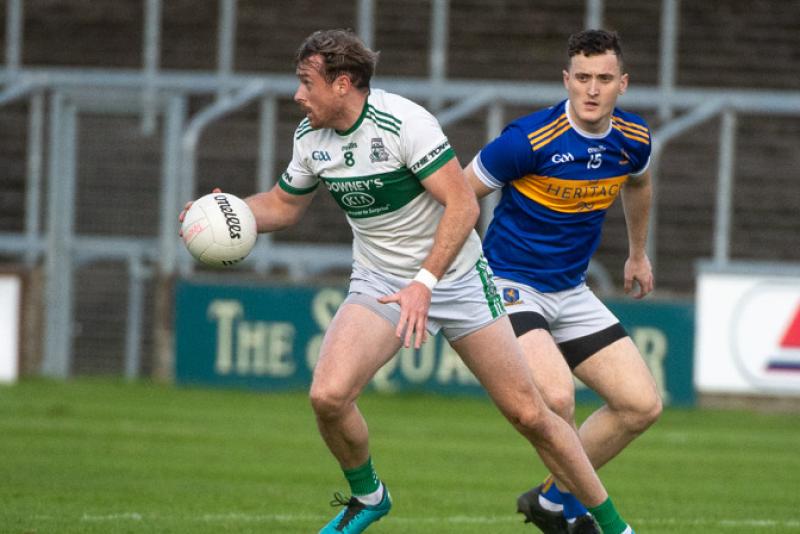 Portlaoise came out on top in a thriller on Sunday evening as they edged out O'Dempsey's after extra time to advance to the semi finals of the senior football championship.

Their bench was crucial with 1-9 of their 1-15 tally coming from the highly influential subs introduced throughout the game.

It looked like O'Dempsey's had their number for large periods in normal time before a final quarter revival from 'The Town' actually had them leading by one at the death before a Mark Barry free with the last kick of the game brought the game to extra time.

Portlaoise took over in the extra periods as O'Dempsey's players were severely hampered by cramp as the energy sapping game wore on.

After a couple of early wides, Portlaoise got off the mark in the third minute with Kieran Lillis curling one over with the outside of the boot. Their lead was doubled in the fifth minute when Damon Larkin got his first.

O'Dempsey's had yet to settle into the game but a point from Veteran Peter O'Leary sparked them into life and with the next attack, they were level with Mark Barry escaping Gareth Dillon to open his account.

Barry then shot narrowly wide but to be fair, he was coming in from a tight angle and let fly first time on the ground as he reacted well to a spilled ball in the Portlaoise penalty area.

The low scoring nature continued but Conor Boyle did manage to put Portlaoise 0-3 to 0-2 ahead at the water break after he sent through by Kieran Lillis.

O'Dempsey's benefited from the break and by the 20th minute, they were level with two beauties off the left boot of Mark Barry soaring them into a 0-4 to 0-3 lead.

Their lead was doubled when Matthew Finlay kicked one over in the 25th minute and in a complete turnaround to the opening few minutes, Daithi Howlin landed a super point in injury time despite been under pressure to give the O'Dempsey's men a 0-6 to 0-3 half time lead.

It could have been more but for Portlaoise keeper Michael O'Connell saving from point blank range to deny Daithi Howlin what looked like a certain goal with the last action of the half.

Mark Barry picked up where he left off in the opening half with another point but two on the bounce for Portlaoise from Ricky Maher and a Paul Cahillane free got it back to a two point game with 40 minutes on the clock.

A well taken point from Johnny Kelly did put O'Dempsey's 0-8 to 0-5 in front at the water break.

Portlaoise came back out from the water break intent on showing their mettle. Brendan Carroll landed a point before two from Ricky Maher (one from a free) brought the sides back on level terms at 0-8 each.

Portlaoise had the momentum but they did lose Ciaran McEvoy to a black card with four minutes left to play. Down to 14, they dug even deeper and with 59 minutes on the clock, they took the lead when Ricky Maher slotted over another free.

With more drama to come, O'Demspey's levelled the game up with 60 on the clock and who else but the brilliant Mark Barry as the sides went into injury time at 0-9 each.

Injury time wasn't for the faint hearted. Ronan McEvoy looked to have won the game for Portlaoise but with the last play of the game, Mark Barry was fouled and landed the free himself to send the game to extra time.

Ronan McEvoy kicked Portlaoise into an early lead in extra time while Mark Barry had a goal chance at the other end blocked by a barrage of Portlaoise defenders.

Ciaran McEvoy re-entered the fray after serving his 10 minutes in the sin bin just before John Kavanagh swung over a mark from 35 metres to put Portlaoise two clear with five minutes gone in extra time.

Portlaoise were dominant now and up for the fight and John Kavanagh was on hand to fire to the net on 66 minutes to really give them a big five point buffer.

O'Dempsey's were not for lying down however and a minute later, they had a goal of their own when Mark Barry gave a defence splitting hand pass to the onrushing Johnny Kelly who finished to the net to make it 1-12 to 1-10.

With the opening half of extra time almost up, Portlaoise landed two more scores with Brendan Carroll slotting over a super solo effort before a monster effort off the left boot of Kieran Lillis found the mark to leave Portlaoise 1-14 to 1-10 ahead at half time in extra time.

O'Demspey's had both Fionn Holland and Cormac O'Hora badly struggling with cramp but with their three extra time subs already used, their hands were tied.

Ben Coen brought it back to a three point game early in the second period of extra time while Brendan Carroll spurned a glorious goal opportunity to seal the deal for Portlaoise at the other end. With the next attack, Matthew Finlay kicked a free and now it was a two point game with four minutes to play.

Ciaran McEvoy found himself through on goals for Portlaoise with two minutes to play but took the sensible option and fisted over the bar to restore a three point lead for Portlaoise.

Bryan Meredith was then black carded for a high tackle on the aforementioned McEvoy just before referee Des Cooney blew for full time as Portlaoise edged a titanic battle by three points.