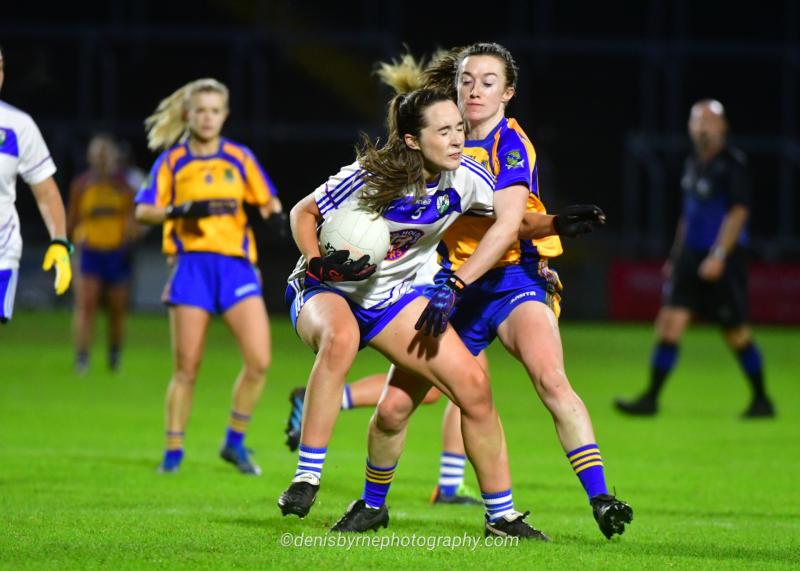 St Conleths are the 2021 Laois Senior Ladies Football Champions after a three-point win over Sarsfields on Saturday evening in Portlaoise. They were worthy winners in the end as they saw off a brave Sarsfields display to claim the silverware.

Appearing in their first ever senior county final, they capped off an unbeaten championship campaign to take them to the promised land for the first time in their history.

Sarsfields started well and they were first off the mark thanks to a close range free from Claire Conlon. It didn’t take long for St Conleths to respond and they were level three minutes later courtesy of Shiofra Havill.

The first quarter was an entertaining tussle between two evenly matched sides, and they were score for score for most of it. Lorna O’Sullivan restored the Sarsfields’ lead with a beautiful long-range effort, but St Conleths responded and were level soon after when Sarah Walsh pointed.

As the game wore on, St Conleths gathered some momentum and points from Aoife Kirrane and Marie Byrne just before the first water break gave them a slight two-point advantage at the first stoppage.

St Conleths were playing with real freedom in their forwards, and they did enjoy plenty of possession, but they struggled to break a well-drilled Sarsfield defence down. Alanna Havill was impressive in the first half and her point just after the water break briefly increased the Conleths lead to three, but Claire Conlon soon cut the lead to two once again.

Havill and O’Sullivan then traded scores to leave the Conleths lead at two points at Kevin Phelan’s half time whistle. St Conleths did regain a three-point lead early in the second half when Sarah Walsh pointed from distance, but once again Conlon’s accuracy from placed balls pulled it back to a two-point game.

Both sides struggled to break their opponent’s defences down and it did seem like a goal would have a huge bearing on the outcome. Sarsfields had a golden opportunity 35 minutes in when Lauren Kearney cut in and fired goal bound, but Naoimi Luttrell pulled off a wonderful save in the St Conleths goal to deny the Sarsfield attacker.

It gave Conleths a lift that they needed after a slow start to the second half, and they shot two unanswered points through Sarah Walsh and a monster point from Aoife Kirrane to give them a four-point lead at the second water break.

The game was extremely tight, but St Conleth’s defence looked almost impossible to break down. Substitute Niamh Cullen fired over a stunning point from distance to increase the Conleths lead to four once again as the Conleths crowd really began to make some noise.

Sarsfields threw everything at the game and Rachel Williams’ driven shot flew over the bar and it was a three-point game with five minutes left on the clock. It was a nervy finish, with many fingernails bitten in the closing stages. St Conleths held onto the ball well in the closing stages, and for a team who were in their first ever Senior County Final, it was a professional ending as they saw out the Sarsfields challenge to land the silverware.

There were magical scenes at the end when Phelan’s full-time whistle blew as the crowd stormed onto the field to celebrate a historical night in St Conleths history.

Rhode have been in every Offaly senior football final since 2012

IN PICTURES: Scenes of joy as Park-Ratheniska return to senior football ranks