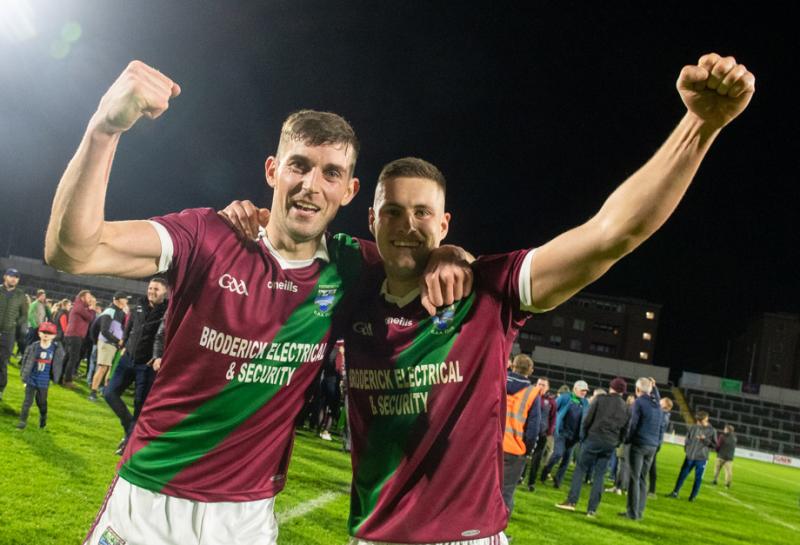 St Patrick’s Day may not fall until March 17th , but for the people in Portarlington, the 14th of November may just become a new St Patrick’s Day in honour of Patrick O’Sullivan.

The Portarlington native gave an inspirational display at wing back as he drove up and down the field, dancing around the Portlaoise defence at his ease. He was unstoppable as were Portarlington as they put kingpins Portlaoise to the sword.
O’Sullivan showed his dominance for 60 minutes as he produced his finest display on the biggest stage of all.
Portarlington are champions again, and speaking after the game, an emotional O’Sullivan remarked that it was ‘the best feeling in the world’.

“Jason Moore, he wasn’t with us now today, but he sent a text last night about winning it twice and we felt we just had to go out and prove ourselves today that great times can do it twice. It’s the best feeling in the world. It was emotional on the pitch. just getting to play with that group of lads and you don’t get a much better feeling that that.”

Remarkably, Portarlington went through the 2021 championship without conceding a goal. In two years, they have conceded just one goal. Their water-tight defence was so solid again on Sunday, that Portlaoise resorted to kicking from distance, a decision that yielded 10 first half wides, as they struggled to break down the Port defence. They did pose a threat to Portarlington’s two in a row, but O’Sullivan and his team mates knew that if they set the pace early on, Portlaoise would struggle to stop them.

“There was huge emphasis around the county about our defence and we haven’t conceded goals. We knew that they were going to try and come out and put a stop to that. We said if we can come out and just get a start on them, do it at pace, running off the shoulder, in our minds there is nobody around that will stop us and I think we proved that today.”

The hurt of the 2019 controversial semi final was still on their mind and at half time, they were in a similar position on Sunday.
They had a lead again on Portlaoise, but there was a different feeling this time around. O’Sullivan and his team-mates knew that there was not going to be a repeat of the 2019 failures.

“We were in a similar position in 2019, five points up and we just weren’t going to let that happen again. Keith Bracken said it in his speech there, Portlaoise set the standard for many years.

“They dominated for so long but hopefully now we can be the new town in the county, the real town.”