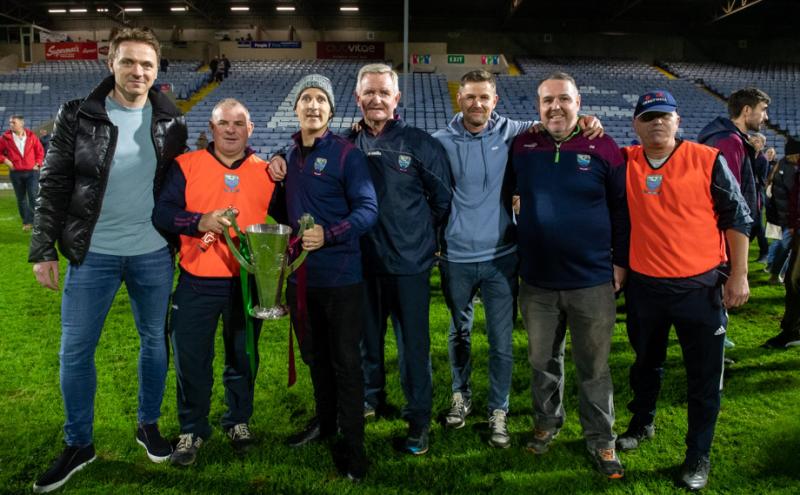 Martin Murphy is no stranger to winning the Jack Delaney cup. This is his fourth time to win it, twice with Stradbally, and now twice with Portarlington. The famous cliché ‘Good teams win it once, great teams win it twice, great teams back it up’ was on the minds of the Port team on Sunday, and they certainly backed it up.

Just 13 weeks after winning the delayed 2020 final with a brilliant display against Graiguecullen, Portarlington proved their worth yet again, with a display that will go down as one of the greatest ever county final displays a team in Laois has produced.

Portarlington dominated from start to finish and speaking after the game, Murphy was thrilled with the fantastic achievement.

“It’s 13 weeks and we nearly have the hours and minute counted as this stage because of the rush to get back to this final and we are thrilled. We are over the moon. This has been a fantastic achievement and I think it’s topped off with a fantastic display today. We are thrilled that things came good at the right time for us today and I am very proud of the boys, I am proud to be involved, and it’s their day.

"It’s a fantastic achievement to win back-to-back, within 13 weeks of each other. It’s great to win today. Portlaoise are never an easy team to beat. They came out today, we were certainly the better team on the day and maybe after their game against Ballyroan, they thought they were in a better place, but we knew today coming in that we had the winnings of this game.

"From the point of view of the dressing room, we were happy that this was our game to win, and our championship and we
were going to keep the Jack Delaney cup in Portarlington”.

Coming into the game, there were questions marks over Portarlington. They were favourites, but with Portlaoise the opponents, they were facing a side who have walked the walk and were in familiar territory. It was Portalaoise’s 14th county final appearance in 15 seasons.

“That display is in them the whole time. It was in them against Emo too if you look at the chances we created that day and the chances we missed and only coming out with 10 points at the end of the match, we went away a bit disappointed. We had a serious meeting on the Tuesday evening after about what went wrong, and I think we rectified a lot of things today.

Winning two county finals in 13 weeks is a remarkable achievement for a team who before 2020, had not won it since 2001. While Murphy is delighted with the two in a row, he still feels they left the 2019 Championship behind them.

"I said it at the 2020 county final that realistically we should have been going for three in a row today and this should be three in a row. We made mistakes ourselves that day, the 13 minutes of added time where nobody could tell us where it came from and then that period of time Portlaoise kicked two points to win the game.

"We used that as a stick to beat ourselves and Covid aside, we came out fighting against Ballyfin and Graiguecullen, won the championship and it was a quick turnaround.

"Maybe it suited us, maybe it didn’t, but it certainly suited us today. 13 weeks was fairly labour intensive, a lot of work was done, I was hoping we hadn’t fatigued a little bit, but they showed today that there is plenty of energy in those legs, and if we get a run in the Leinster Championship, these guys could go the whole way".

Martin Murphy has certainly written his name into the history books in both Laois GAA and Portarlington, but for his humble self, Murphy was quick to point out that today is “all about Portarlington GAA club”.

"Today is all about Portarlington GAA club and those 30 players that were out on the field. We’ll go and enjoy this and go and prepare over the next few weeks for the Leinster Club Championship.”