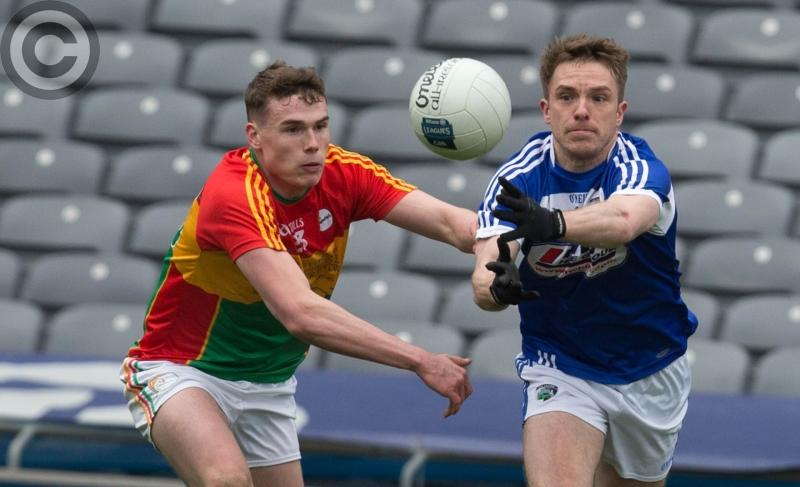 Ross Munnelly was central to the Laois win over Carlow in the NFL Division 4 Final. Pic: Alf Harvey.

We've been here before, just not for a while.

For the majority of Laois fans, the halcyon days of Mick O'Dwyer's era are now far enough away to be distant, but not too far to be forgotten.

Leinster semi-finals were the norm then, as common as grass and a mere prelude to the real action in the final.

They were wonderful times for Laois, but time waits for no one. As the year slipped by, Laois slipped down, and when Clare dished out a chastening defeat in O'Moore Park last year, no one walked out of the county grounds thinking they'd be watching Laois in a Leinster semi-final a year later.

Remarkably, that is exactly where we are. It is a testament to John Sugrue that he has inspired, for the most part, the same group of players to recover their pride and identity so quickly.

Laois now meet Carlow for a third time in three months, and have the difficult task of trying to engineer a third consecutive victory.

Laois were deserving winners on both previous occasions, but the Carlow they meet this Sunday will be a different proposition to the one they beat on two occasions this year.

Having beaten Louth and Kildare, Carlow have traversed a more difficult path than Laois to get here. They have scored impressively, and while they might set up in a system which suggests a lack of ambition, they simply play to a style that suits them.

The worry against a team that sits as deep as Carlow is that you lose patience. You commit too many men forward, your defenders and midfielders get pulled out of position, which obviously plays into the hands of Carlow.

They aim to sow chaos and reap rewards when possession is turned over and the opposition are trying to race back to where they are supposed to be.

That either leaves space for them to exploit or earns them frees, as players foul out of desperation.

They'll be in the faces of their Laois counterparts and they'll be vocal on the line, all of which is designed to put the opposition off their game.

Laois had the perfect response to that in the League final. They blitzed them from the opening whistle, built up a lead, and made Carlow chase the game, something they don't really like to do, and their style of play is not set up to do.

Another start like that would be the dream, but patience and discipline are every bit as important, if nor more so. Laois have to be wary of Carlow, to a greater degree than any other Laois team have been.

Carlow are riding the crest of a wave now, with their senior hurlers having already humbled their Laois counterparts last weekend.

That build momentum in the county, tells the supporters they are going the right way, and makes them come out in bigger numbers.

This is a watershed season for Carlow, and to them it will feel like destiny to beat Laois on Sunday. That might seem quaint to Laois people, but belief is coursing through every Carlow footballer at the moment, and it is a potent force to contend with for anyone who faces them.

Laois will likely come into the game with considerably less fuss being made about them, which is great. Carlow are the story of the summer at the moment after their win over Kildare, so will be afforded more of the spotlight ahead of this Sunday.

Laois will have to take the advantage that affords them, to prepare away from the full glare of the media, while every article written about Carlow will crank the pressure up on them little by little.

Laois have shown steady improvement so far this year, but nothing so far has suggested they are playing to the full extent of their abilities.

They have hit purple patches and played some wonderful football, but they haven't done it for 70 minutes, and will need to perform for the entire game this Sunday if they are to be victorious.

The panel continues to impress, and the last day, we could bring in three forwards of the calibre of Gary Walsh, David Conway and Evan O'Carroll. Eoin Lowry is getting back to full fitness as well.

Laois haven't had options like this for some time, and in what will likely be a physical and intense game on Sunday, the strength of the Laois bench will be a crucial factor.

Laois know how to beat Carlow, but they have forgotten how to win Leinster semi-finals. They need to rediscover that ability by 2pm this Sunday afternoon.

Laois and Carlow battle is close to home for Graiguecullen stalwart.