Turner 'overwhelmed' by hero's reception as she returns home to Portarlington 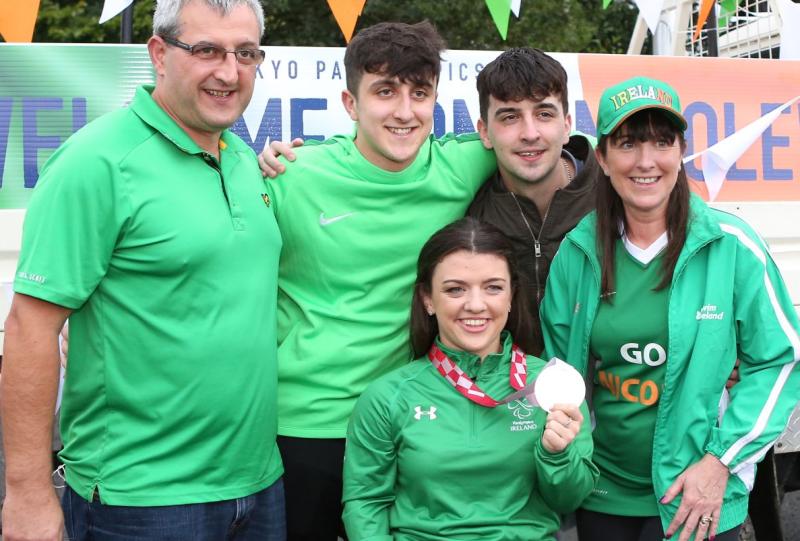 Nicole Turner with her family at her homecoming on Wednesday night. Photo: Michael Scully

Laois and Offaly don't always see eye to eye in a sporting sense but the two Counties came together on Wednesday to welcome home Portarlington's own Nicole Turner and the Paralympic silver medalist was given a hero's reception in her home town as hundreds of people flocked to welcome her back.

There were scenes of joy and not even the adverse weather conditions could stop the local community come out in force and welcome their pride and joy back home after her exploits in Tokyo last month.

Speaking at her homecoming, Turner explained that she was bowled over by the level of support she has received and couldn't believe the crowds that turned out to welcome her back on home soil.

"It is so overwhelming just to see the support out there especially in these conditions. Coming in here tonight, I didn't expect this. Coming down through the town and seeing the crowds here, it is just amazing. Swimming is tough and sport is tough in general but to come out and win a medal and see the happiness it brings to everyone else is an amazing feeling.

"It means a lot. I do make a lot of sacrifices and my friends are so understanding of that."

It has been a long road for Nicole and the Turner family. Her mother, Bernie, is her biggest fan and over the last five years, the family have been on a rollercoaster journey taking in two Paralympic games and culminating in a spot on the podium in Tokyo.

"The difference between Tokyo and Rio was I was so young in Rio and I just went out and enjoyed myself and I won't say I had pressure on myself in Tokyo but I did feel I needed to perform but at the same time just be happy with my swim.

"In Rio I was half a second away from a bronze medal and that was tough to take back then. People would see 13 and 14 year olds being too young to go to a Paralympics but for me, I just went out, experienced it got to compete at the highest level.

"Even the support staff out there in Tokyo were like just go out and be happy and have a good swim. The medal was a bonus after that.

"Looking back on the last five years, myself and my Mam would have travelled up to Dublin six days a week so it has paid off in the end", explained the teenage swimmer.

Portarlington and Portlaoise athletes on screens this Friday

A lot of things have had to take a back seat during her journey to the top. Sacrifices are part and parcel of any sportsperson's life and Nicole Turner is no different. Her level of dedication to her sport meant she had to put her education on hold.

"The school are so supportive but travelling up and down to Dublin and trying to balance a Leaving Cert just wasn't feasible. I took the year out and then the year turned into two years.

"It was quite challenging when the games got postponed and lockdown was hard. We were out of the pool for two and half months, that's the longest I have ever been out of it."

Women's sport has taken a massive leap forward across many sports in the last while and the Portarlington swimmer took particular inspiration from an Irish Boxing icon over the last few years.

"I am good friends with Kelly Harrington. I have known her the last five years or so and she is honestly the most down to earth and genuine person you will ever meet.

After she won gold at the Olympics, I messaged her just to congratulate her and she sent me the loveliest message back saying it was now my time to shine and you are going to do it.

"We got eight medals overall in Tokyo and five of them were Women so we outnumbered the males this time."

So what's next for the latest Irish sporting star? It's a bit of down time but even during that, the next Paralympic games in Paris in 2024 is never too far from her thoughts.

"Thankfully we get a good four weeks rest now, spend time with friends and family and celebrate but then it's all eyes back on the next games in Paris." 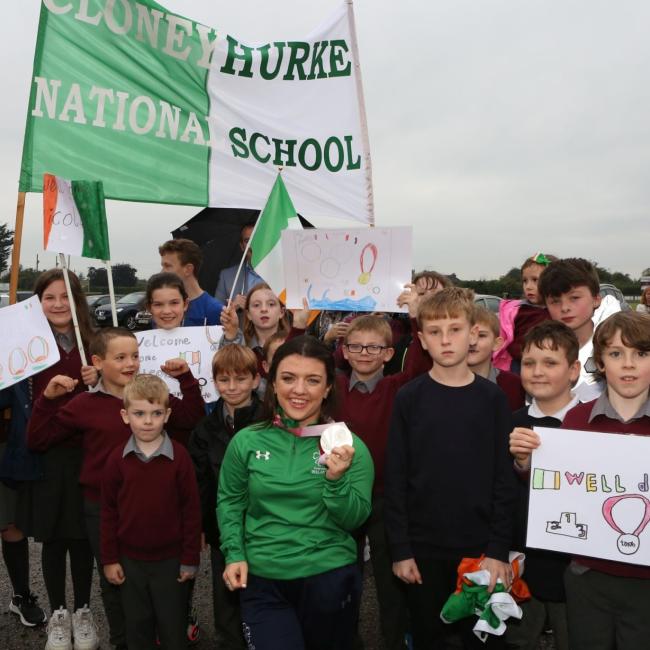