Tough and rewarding day for Laois Teams at the Leinster Cross Country Championships. 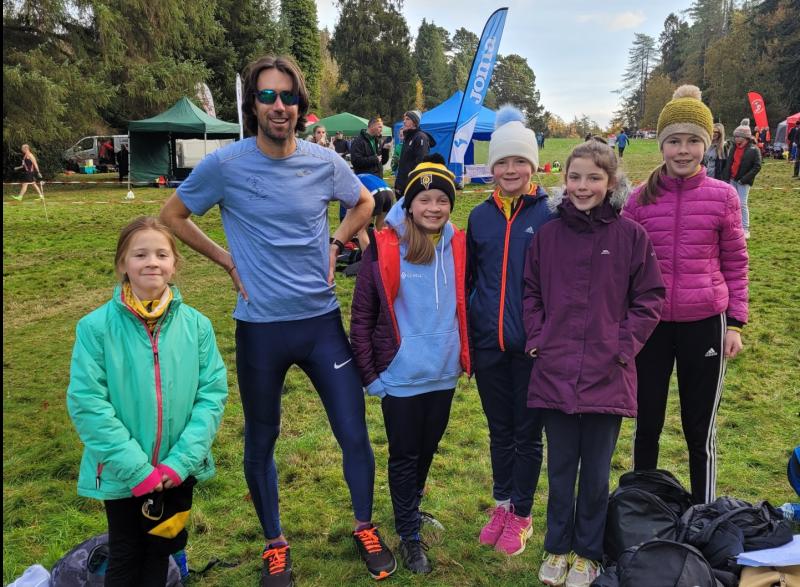 Olympian Mick Clohessy posing with the Oughaval Girls U15 team

Avondale House in Rathdrum Wicklow was the venue for last Sundays Athletics Leinster Juvenile and Senior / U23 Cross Country Championships. The birthplace of Charles Stewart Parnell was looking magnificent in the autumnal sunshine, and
there were some fine athletics performances among Laois athletes to celebrate.

These races can be intimidating affairs. They are extremely competitive, and the numbers are huge, especially in the younger age-groups. The course is hilly and sometimes muddy too, so if your training is confined to track running or flat dry football fields, you are in for a shock.

There are approximately 110 juvenile athletics clubs in the Leinster Region, and an indication of the toughness of the event is that there are rarely more than 20 complete teams in any one race - so to have a complete team in any race is not an easy task, and a good achievement in itself.

Athletics Leinster competitions are open-entry, no pre-qualification at county level is required. However, entry to the All-Ireland Championships is based on these results from the Leinster Championships - only Top 12 individual finishers, and Club Teams and County Teams who finish in the first three in their race can enter the All-Ireland event.

First up was Girls U11 with 132 finishers. Laura Ayers and Laura Malone (both of St Abbans) finished in second and 11th, earning individual medals and leading their team of Laura, Laura, Lily O'Neill and Zoe Dunne to second placed team and silver medals.

With 17 teams in the race this is a big result for the St Abbans girls. The Laois team of Laura, Laura, Aoileann O'Comhraide Emo Rath AC, Lily, Zoe and Abigail Daly St Abbans, finished 6th.

Boys U13 had 117 finishers, and leading them all the victory was Will Craig of St Michaels and Laois. Daniel Downey of Portlaoise AC also stood on the podium, finishing in a fine 7th place. The St. Michaels team of Will, Riley Connolly, Dylan Yarrow and Aaron Twomey finished 9th of 13 clubs, and the Laois Team of Will Craig, Daniel Downey, Kalem Buggy, Riley Connolly, Adam Kelly and Stephen Redmond finished 5th.

Girls U15 had another big field of 109 runners. Rachel Ayers of St Abbans finished in 9th place. There were 14 teams in the club competition. The Oughaval team of Della McLoughlin, Katie Mcloughlin, Ella Dunne and Lucy Browne finished in 9th position, with the St Abbans team of Rachel Ayers, Jessica Murray, Katie McGrath and Caoimhe Brennan just a point behind in 10th place.

The Boys U15 had 87 runners, with Finn Craig of St Michaels winning an individual medal in 4th place. No Laois Club had a full team in this race, and the Laois team of Finn Craig, Shane Maher, John Delaney, Timmy Byrne, Sean McAuliffe and Aaron Farnan finished 6th. The numbers begin to decrease at this stage, with 77 runners in the Girls U17.

Girls U19 brings a complete collapse of numbers, with 23 runners competing. There was no Laois representative in this race.
The Boys U19 also had very small numbers, with only 19 competitors. Jack McMahon, Ballyroan Abbeyleix and District, and Oisín Jago, Oughaval AC, both finished in podium positions of 10th and 11th. With four to score on a county team here, the Laois team of Jack, Oisin, Cillian Moran Portlaoise AC, and Daniel McLoughlin and Billy Ramsbottom of Oughaval AC placed second behind Meath.

Club team success for St Abbans in Girls U11 and Boys U17, and one Laois County Team (Boys U19) made it to the medal podium today. In line with many sporting activities in the country, an alarming drop-off in numbers at U19 level - a
challenge not just for athletics, but for society in general.

Meanwhile in the Senior and U23 race, Lucy Deegan St Abbans rane a great race and finished 2nd in the U23 Womens Category, and her team of Lucy, Laura Ward, Caitlín McDonald and Mary Doyle finished just outside the medal places in the Senior event.