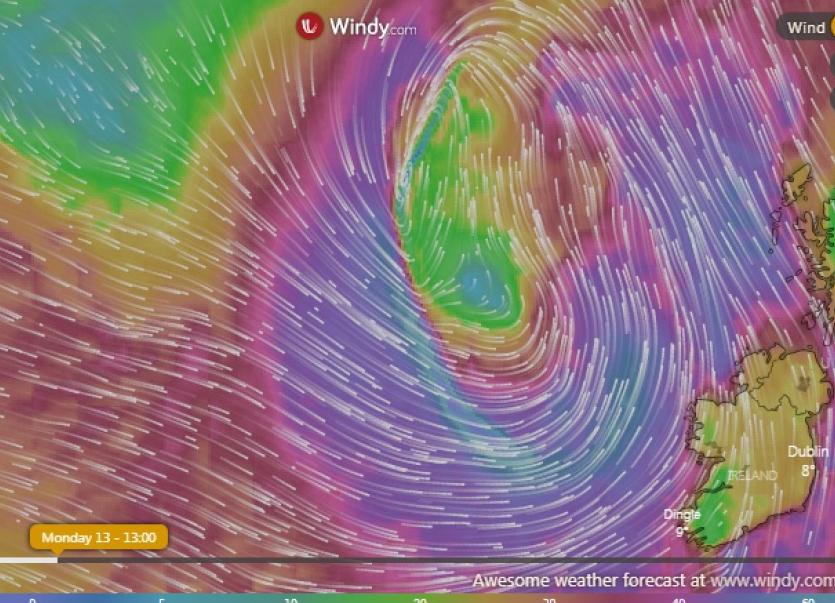 Met Éireann has raised the alert level for Storm Brendan to a Status Orange for all of Ireland as expected weather may pose a threat to life.

A Status Orange wind alert  had been in place for western counties and some other coastal counties. However, at 3pm on Sunday the forecaster extended the warning to the entire 26 counties.

Two Orange alerts are in place while a Status Red warning has been declared for marine areas.

The updated alert says that  as Storm Brendan tracks to the northwest of Ireland, southerly winds will reach mean speeds of 50 to 70 km/h with gusts of 100 to 120 km/h, higher in exposed areas.

The forecaster says there is a significant risk of coastal flooding due to the combination of high spring tides and storm surge.

This upgraded alert from a Status Yellow is valid from 8am to 3pm on Monday, January 13.

The updated Status Orange wind warning for Connacht, Donegal, and Kerry says that as Storm Brendan tracks to the northwest of Ireland, southerly winds will reach mean speeds of 65 to 80 km/h with gusts generally up to 130 km/h, higher in exposed areas.

The forecaster says there is a significant risk of coastal flooding due to the combination of high spring tides and storm surge.

This warning is valid from 5am to 9pm on Monday, January 13.

The Status Red Marine warning gale warning says gale force 8 to storm force 10 southerly winds will develop overnight and on Monday morning on all Irish coastal waters and on the Irish Sea. It says winds will reach "violent" storm force 11 at times from Mizen Head to Slyne Head to Malin Head.

Met Éireann says a Status Orange warning is issued when "there are infrequent but dangerous weather conditions which may pose a threat to life and property". MET ÉIREANN WARNINGS EXPLAINER.

Please see our updated warnings regarding #StormBrendan on https://t.co/ozrQHtoOkt, coming into effect at 5 am for Connacht, Kerry and Donegal and 8 am for the rest of the country. pic.twitter.com/JshS47suAr

The forecaster's weather charts reveal the strength of winds and extend of rain as well as the track of the storm.

MET Éireann national forecast issued on its website at 4.17pm on Sunday, January 12.

Sunday night
Becoming mostly dry early tonight, with clear spells at first and just a few scattered showers on Atlantic coasts. Cloud will increase from the Atlantic, bringing more persistent rain to west and southwest coasts towards morning. Southerly winds will gradually strengthen overnight, increasing strong to gale force later on Atlantic coasts, with some severe and damaging gusts developing. Minimum temperatures of 1 to 4 Celsius, coldest early on, with some patchy frost.

TOMORROW - MONDAY 13TH JANUARY
Storm Brendan will produce extremely windy and wet weather on Monday, with status Orange weather warnings in force for all counties and status Red in sea areas. Gale force southerly winds will extend countrywide during the morning, with severe and damaging gusts. Heavy rain will extend from the Atlantic also, possibly thundery in places. There will be significant risk of coastal flooding due to a combination of onshore winds, high spring tides and storm surge. Clearer conditions, with squally showers of rain and hail, will follow from the west during the afternoon and early evening, with the ongoing risk of thunder. Winds will veer southwesterly with the clearance, easing a little in most areas, but it will remain stormy on western coasts, with further severe gusts. Maximum temperatures 7 to 10 degrees.

NATIONAL OUTLOOK
Monday night: Showers retreating to western parts of the country, some of them potentially wintry. Becoming dry with clear spells further east. Lows 0 to 3 degrees Celsius. Southwesterly winds will gradually moderate overland, but they will continue strong and gusty near coasts.

Tuesday: Sunny spells to begin the day over some northern parts of the country with showers, some wintry, in the west will gradually give way to the cloudier skies further south, with rain becoming widespread. Some sleet in places and some hill snow, especially over parts of the midlands. Very cold over the bulk of the country with afternoon highs of just 2 to 4 degrees, but milder near the south and southeast coast. Light to moderate southerly winds, fresh to strong on north and northwest coasts, will become mainly light to moderate cyclonic in the afternoon as an area of low pressure moves up from the south, but strong and gusty southwesterly on the southeast coast. Any rain or sleet will clear quickly northwards on Tuesday evening and night leaving clear spells. A few scattered showers will occur in Atlantic coastal counties overnight, some of them wintry, especially on hills. Southwest winds will be mostly moderate to fresh at first but they will become gusty overnight, increasing strong to near gale on coasts. Cold and frosty, with lows of zero to 3 degrees, but increasing 3 to 5 degrees by dawn.

Wednesday will be a bright and breezy day in many areas with sunny spells. Scattered showers will occur, however, mainly in the west. Top temperatures of 5 to 8 degrees. Moderate to fresh southwest winds will back southeasterly in the evening. Another area of low pressure looks likely to sweep up from the south on Wednesday night, delivering another spell of heavy rain, especially in the western areas. Southeasterly winds will increasing strong and gusty on Munster and Leinster coasts. Lowest temperatures ranging 2 to 5 degrees.

Thursday is looking wet and windy at this stage. Winds mostly moderate to fresh and gusty southeasterly veering southwesterly overland, strong to near gale at the coasts. Rain will be widespread for a time, potentially rather heavy in western counties with a risk of spot flooding there. Daytime highs of 7 to 10 degrees.

Friday and the Weekend: Current indications suggest the changeable Atlantic regime will continue.