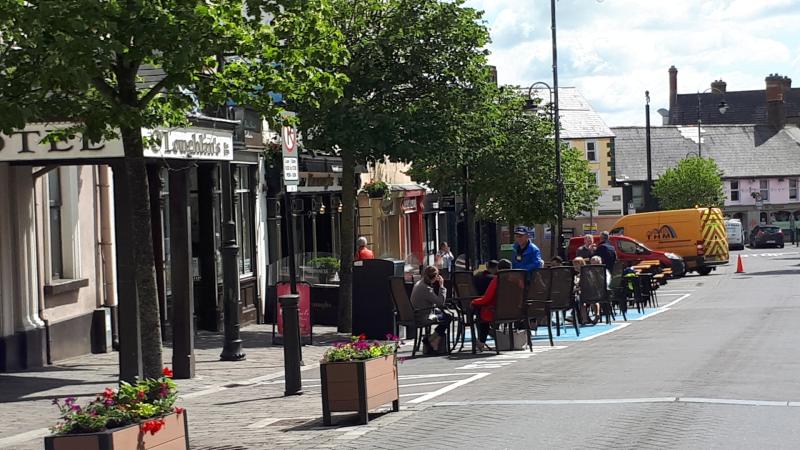 Laois Gardaí say they have been “exercising extreme discretion” with people sitting drinking in the street following national news of it being against bye-laws in places like Galway.

The Government has spent millions installing street dining areas to support local restaurants and pubs this summer to reduce the risk of Covid-19 infections. However licencing laws only allow for drinking on a premises, and sitting on council supplied furniture on the street outside a pub was actually breaking any bye-laws against public drinking.

However, the Leinster Express checked it out, and have found out a very surprising fact for Laois.

You can actually drink alcohol in public, anywhere across the whole county.

Laois County Council has confirmed to the Leinster Express that there is actually no law against drinking in public in Laois.

“There are no bye-laws in Portlaoise or any other area of County Laois pertaining to outdoor consumption of alcohol,” Portlaoise Town Manager Simon Walton said on Monday.

The clarification follows a statement by Laois Garda Chief Supt John Scanlan who said they are being discrete and understanding with Laois people sitting in the streets drinking.

He was replying to queries by councillors about outdoor drinking at the Joint Policing Committee meeting on Monday June 21.

“It’s a matter for elected people to deal with the law, not for the Garda Síochána. So if there’s bye laws in Portlaoise that says it’s illegal to drink in a public street then it’s illegal.

"In the absence of an amendment to the law, we have been exercising extreme discretion," he said.

While it may be legal to drink in public in Laois, being drunk is still a crime.

There were 17 people charged with 'drunkeness offences' in the first four months of 2021, and another 49 charged with public order offences. The statistics were given by Garda Chief Supt Scanlan at the meeting.

He said however that there has been no major outbreak of public order offences, as pubs reopen.

"We understand that people are probably getting out into that world of drinking again for the first time again, we will have aberrations.

"We had an incident in Portarlington over the weekend but that's about the height of it. There has been no major outbreak of public order incidents,” he said.

The issue had  raised to Minister for Justice Heather Humphreys by the Garda Commissioner Drew Harrison the same day that Commissioner Harris joined the Laois JPC online meeting.

He gave a presentation on the new operating changes to An Garda Síochána. However he did not speak to the meeting about the bye-laws.