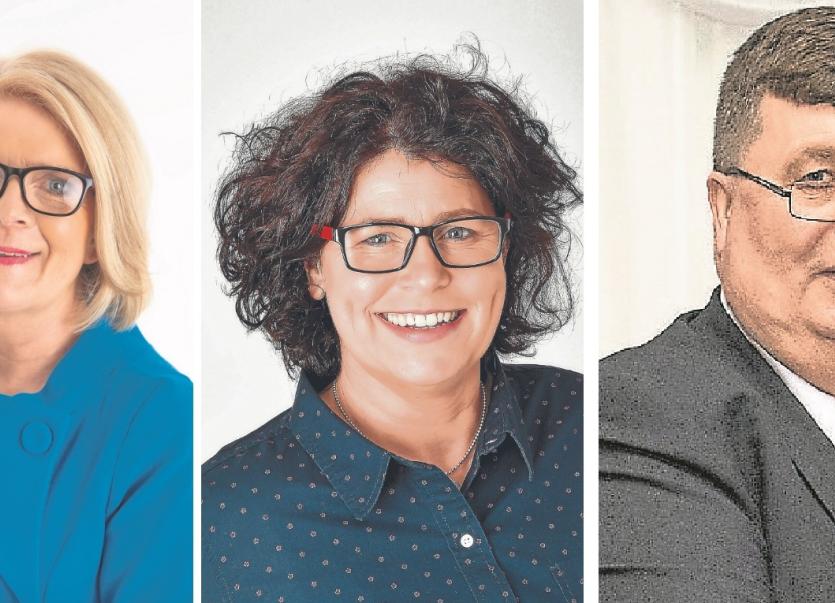 Cllr Catherine Fitzgerald, the then Laois County Council Cathaoirleach, Cllr Aisling Moran and Cllr Paschal McEvoy who clashed over who got to cut the ribbon and who was not invited to a road opening

Who was not invited and who got to cut the ribbon on a new multi-million road in Laois caused an angry row at the June Laois County Council meeting between councillors.

The N80 road from Portlaoise to Carlow has undergone a major straightening over several years.
The official opening of the 2km €6 million Maidenhead Realignment near Arles village, took place under Covid restrictions recently with just 15 people allowed at the photo opportunity.

Busy Portlaoise town centre road to shut for a month

Fine Gael Cllr Aisling Moran was there, but questioned why her Charlie Flanagan TD was not invited, noting that he as Minister had first announced funding for it.

She said neither was Sinn Féin TD Brian Stanley. The only Laois TD invited was Fianna Fáil’s Sean Fleming, Minister of State.

“This is not about party politics, it is about inclusion. All parties should work together for the people of Laois. We need to move away from racing to photo ops to get one up on our colleagues.
“We cannot use covid as an excuse, because 50 people are allowed attend an outdoor gathering,” Cllr Moran said.

Cllr Moran who was elected two years ago asked if it was protocol to invite all local TDs to such events.

The Cathaoirleach, Fianna Fáil Cllr Catherine Fitzgerald who cut the ribbon said it was.
“But it’s a different time, we were confined to 15 people that day and Deputy Sean Fleming was representing the Minister. I think that’s a very reasonable explanation,” she said.

“It is if that’s the truth. We need to be working together here, not rushing to get photos taken and party politics,” replied Cllr Moran.

Cllr Ben Brennan questioned why 50 people can be in a church but only 15 at the opening outside.
“I couldn’t understand who drew up the names. Deputies should be there,” he said.

The Director of Services Simon Walton said that the invitations were issued when the public health limit was 15 people. He said that the TII didn’t send a representative out “in support of the squeeze we had” and that Minister Fleming represented the Department of Transport who funded the road. He said others there included council staff, councillors and contractors.

The discussion heated up when Cllr Paschal McEvoy claimed that Cllr Moran was not happy because she had wanted to cut the ribbon.
“I think Aisling had a bigger problem at our Municipal District meeting, the fact that she wasn’t allowed cut the ribbon on the day. Now that that’s been clarified she’s decided to take another line,” he claimed.

“That was not the case,” Cllr Moran replied.
“I was there, I’m glad it’s been clarified today that the chairperson takes precedence over municipal districts,” Cllr McEvoy added.

“Can I say it myself, you asked me for the scissors on the day, so that’s what happened,” the Cathaoirleach said to Cllr Moran, going on to ask for respect between councillors.

Fianna Fáil Cllr John Joe Fennelly told the Cathaoirleach that he was disappointed to read of news reports of the row at the Graiguecullen Portarlington MD meeting.

“The Cathaoirleach is the first citizen of this county and it’s your duty to represent this full council at any official opening. I was very disappointed to read it on social media and in newspapers. It was disrespectful to you,” Cllr Fennelly said.

Cllr Brennan said it was himself who raised it at the district meeting.
“When the northern relief road was opened Cllr Tom Mulhall got the honour as chairman of the municipal district,” he said.

“I opened that road, in the presence of Cllr Mulhall and if you read the stone that’s what's on it,” the Cathaoirleach replied, again calling for respect.

“I’m finishing in the chair today and I’m asking for respect for ourselves as councillors to treat this as the people of Laois elected us to do and behave in a mannerly fashion at any function hosted by Laois County Council. This is an absolutely ridiculous charade,” she said.

Cllr Aisling Moran then said she wanted an apology.
“You can spin it any way you want Catherine,” she said to raised voices all around as Cllr McEvoy said he stood by what he said.

The row cooled as Cllr Willie Aird brought it back to the road itself.
“Missed in all this is to congratulate everybody on what I think is an absolutely brilliant job at Maidenhead. To everybody involved, and it was a tricky one, well done. It’s a great day for Laois,” he said.

Cllr Padraig Fleming agreed.
“It’s a thing that people were crying out for 30 years and longer, the danger of those roads, and this has made it significantly safer and easier to navigate. A great day for our district and all people who traverse the road and the local people,” he said.