Laois features strongly in a new garden programme set to air this week on RTÉ One called Ireland’s Historic Gardens.

Out of 17 beautiful country house gardens to be visited in the two part documentary, three are here in Laois.

Ireland's Historic Gardens is written and presented by author and historian Robert O’Byrne.

This first programme has a visit to Abbeyleix and Ballyfin, while part two will feature Heywood Gardens.

Robert told the Leinster Express that he could have added more from Laois, such is the wealth of gardens here.

"I could have done more besides but I'd have started to look like I was paid by Laois Tourism. You have wonderful gardens in Laois, it is very blessed. I am also a big fan of what the Stokes have done at Castle Durrow, they have worked very hard to create rather wonderful gardens.

"Laois was one of the first counties to be settled and it has a good climate so it had a head start. Stradbally also had an incredibly elaborate Baroque garden. I believe Laois could do more to promote it's gardens. There is so much more interest since the pandemic," he said. 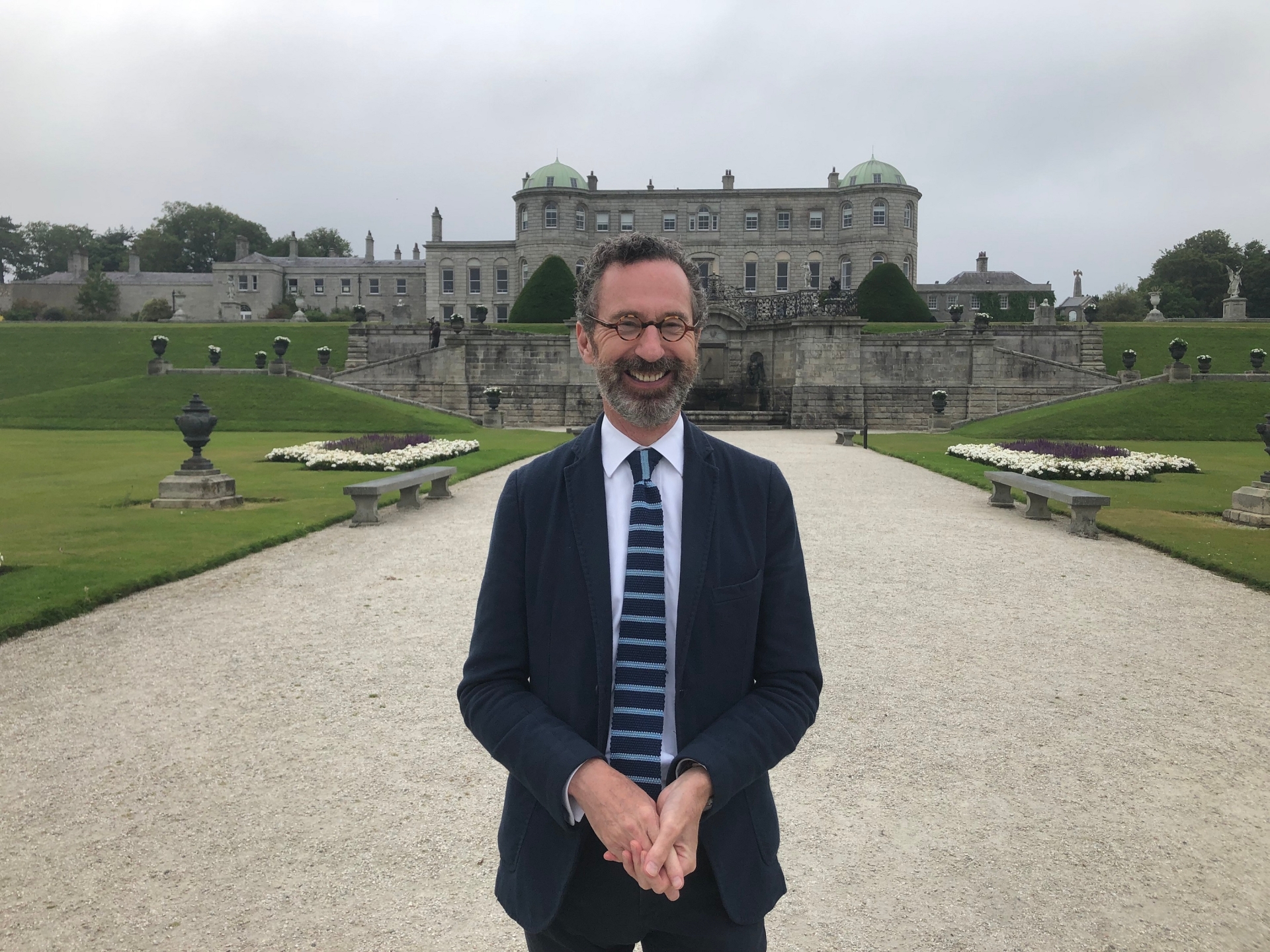 He explains why he chose the three Laois gardens featured.

"They all show different aspects of garden history. The earliest is Ballyfin, created by the Poles, and it is a very important surviving example of a manmade sweeping Arcadian landscape. It's lake is manmade by water from the Slieve Blooms and their very large walled gardens are still in use.

"Abbeyleix has wonderful terraces in the high Victorian style of which there are not a lot of surviving examples because they are high maintenance. I hope Mr Collison will give lots of jobs to garden people at Abbeyleix.

"Heywood is such an important garden. A lot of people will know Lutyen's sunken garden but there was a romantic landscape created by the Trenches, with fake medieval ruins, a fake abbey, castle and cross, all from the 18th century, and a whole series of interlinked lakes created, again a very rare surviving example," he said.

Below: Ballyfin House with its manmade natural landscape and lake. 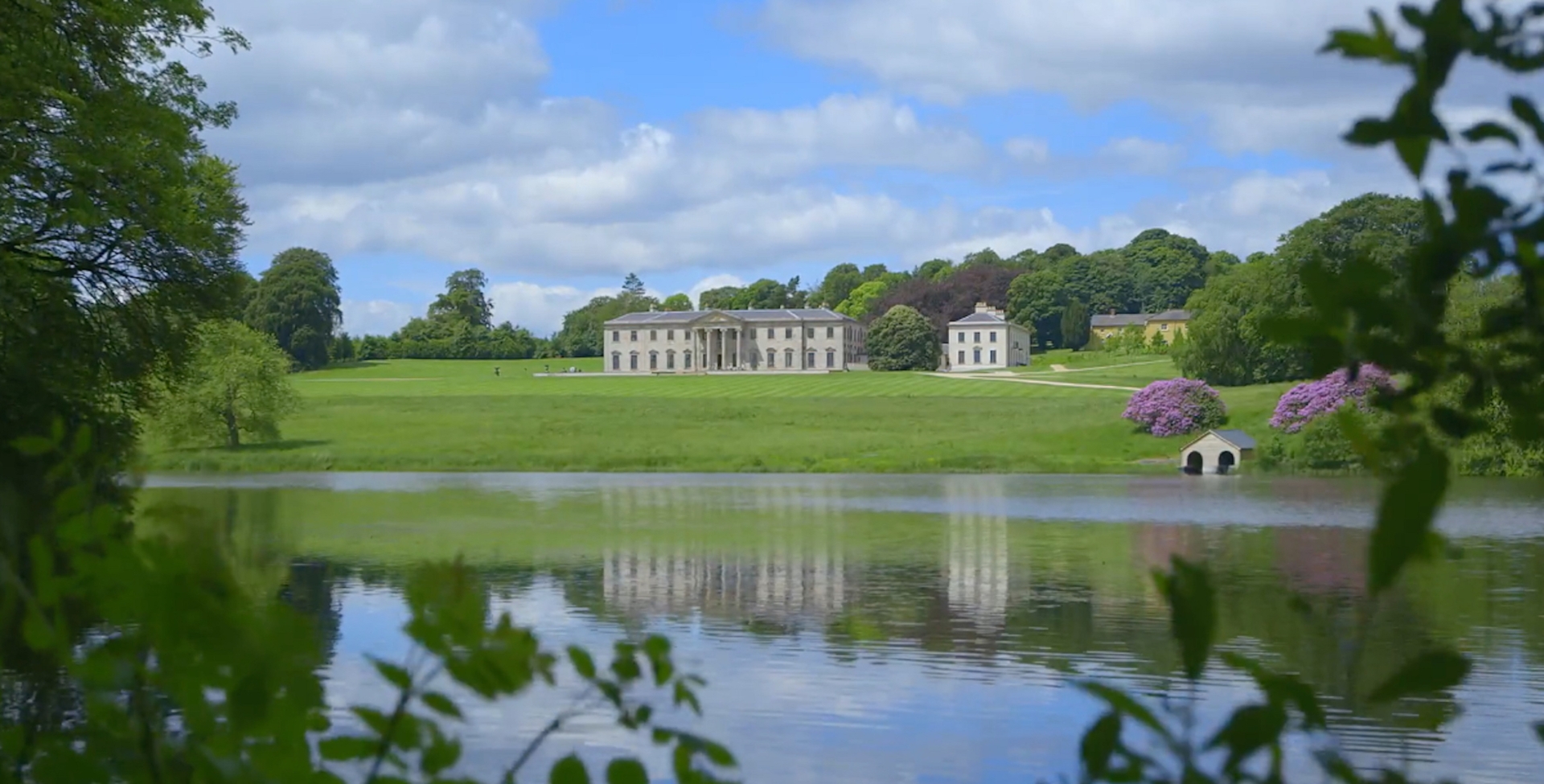 Ireland's Historic Gardens examine the history of Ireland’s country house gardens over the last 400 years during which time garden design has reflected political and social changes taking place within the country.

Robert O’Byrne visits seventeen significant and influential gardens and meets gardeners, historians and owners, each of whom adds insight and knowledge to the fascinating story of Ireland’s country house gardens.

They also include Muckross Abbey in Co Kerry, Lismore Castle in Co Waterford, Portumna Castle in Co Galway; and the National Botanic Gardens in Dublin. The former vice-president of the Irish Georgian Society also introduces viewers to Kilruddery in Co Wicklow, and Dublin’s Royal Hospital in Kilmainham, as well as the Casino at Marino. Also featured are Lismore Castle with the oldest continuously cultivated garden in Ireland, Portumna Castle, Kilruddery, and the Royal Hospital, Kilmainham, Powerscourt, Mount Usher and Dereen.

Ireland’s Historic Gardens is produced and directed by David Hare of Inproduction TV for RTE, in association with the Office of Public Works and the Irish Georgian Society.

The historian is also co-editing a book on Ireland’s historic gardens due to be published next year, and he confirms that Laois will feature "heavily" in this new book.

Laois gardens will also feature too in a unique exhibition curated by Mr O'Byrne, of some fifty specially commissioned paintings of Irish Walled Gardens by four leading artists. It will be launched by the Irish Georgian Society later this month in the City Assembly House, South William Street, Dublin. Stepping Through the Gate: Inside Ireland’s Walled Gardens, runs from Friday  September 24 until late November.

Robert O’Byrne has become one of Ireland’s best-known writers and lecturers specialising in the country’s fine and decorative arts. He is the author of more than a dozen books, among them Luggala: The Story of a Guinness House and Romantic Irish Homes.  A former Vice-President of the Irish Georgian Society, he is currently a trustee of the Apollo Foundation and the Artists Collecting Society.

Could a Laois person be picking up €17million Lotto Jackpot

In Pictures: Dunamaise Arts Centre bursts back into life on Culture Night Laois