Many Laois schools have been awarded the Green Flag this week for their environmental efforts, despite the extra challenges they had to face during the pandemic.

Two out of the 14 schools who achieved the certification from An Taisce, have achieved it for the first time, Holy Family Senior School in Portlaoise, and Knockbeg College secondary school on the Laois Carlow border.

They were among 526 schools around Ireland all announced as recipients of the Green Flag this week for their dedication to sustainability and protecting their environment.

Green-Schools is an environmental management programme for schools which focuses on themes including Litter and Waste; Energy; Water; Travel; Biodiversity; Global Citizenship and Marine Environment.

This year schools in Ireland achieved amazing results in the themes:

70% of schools working on our Litter & Waste theme took part in awareness raising action days, with 73% reporting an increase in awareness of litter and waste issues

29% of schools working on the Energy theme managed to make energy savings which is amazing considering the challenges over the last couple of years. 94% of schools saw an increase in awareness on the topic of Energy.

77% of schools awarded for the Green-Schools Travel theme saw an increase the number of students cycling to school and 85% of schools recorded an increase in sustainable travel overall.

Schools involved in the Biodiversity theme increased the level of biodiversity nationwide by planting over 2000 trees; creating more than 150 new wildlife-friendly gardens and erecting at least 250 new bird feeding stations.

88% of schools working on the Marine Environment theme investigated the sources of marine litter and promoted an action to reduce it.

93 secondary school students took part in the Water ambassador programme as part of the Water theme, which provides mentoring and training for committed students who want to make a difference.

“We know that you have all been working incredibly hard in your schools over the last year and you continued to find innovative ways to keep the programme going during school closures and social distancing. You managed to have outdoor Committee meetings, online workshops and attending online webinars to keep up to date, so thank you.”

Schools were invited to six online award ceremonies which took place from Monday, October 4 to 8th with the final ceremony for the Water theme taking place on October 14. At the ceremonies schools enjoyed activities like Sea Shanties and online quizzes, with messages of support played from “Captain Climate”, actor Nicola Coughlan, champion cyclist Lara Gillespie and local authority Environmental Awareness Officers, who support schools during their participation in Green-Schools. 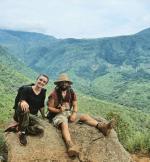 School in an Envelope is the name of their idea