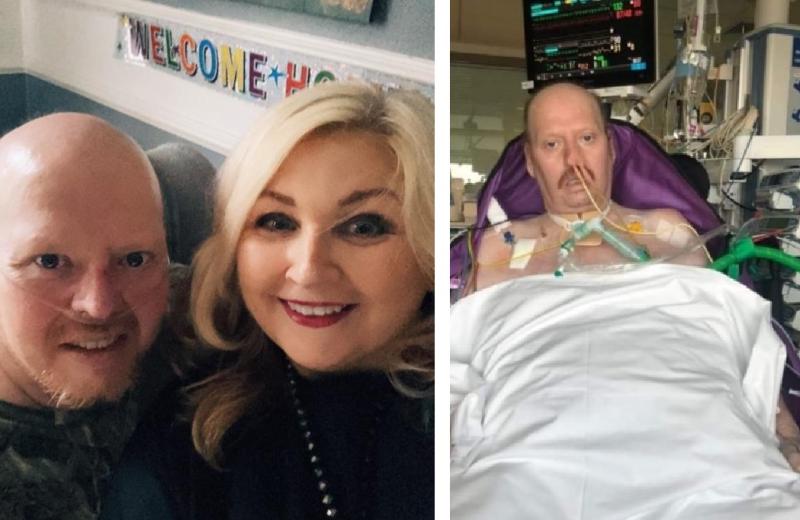 A Laois man who almost died from Covid-19 has described his emotional homecoming after seven months in hospital.

Gerard McHugh, known as Jack is a Dublin native now living in Portarlington with his wife Patricia.

He came home from the Mater hospital on October 20, a different man from the one who stepped into an ambulance last April with breathing difficulties.

Just days after he was admitted to Midlands Regional Hospital Portlaoise, Jack was placed in a coma to try and save his life, but he deteriorated in days to the point where the life support machine was set to be turned off.

His life was saved by a special blood oxygenating machine and its team who came down from the Mater hospital to Portlaoise, connected Jack up and kept him alive to fight the virus.

He came out of his coma last June and a slow painful recovery began.

It was strange to return home, he said.

“When I was told I could go home, it was surreal. I was shocked and anxious. On the evening I came home I was totally confused. I thought everything would be the same. I had so many expectations but the reality was different. It took me a few days to come to terms with it. I’m not the same person.

“The night I was taken away I walked to the ambulance. But that person is not the same person who came in that door. Things I had taken for granted, getting up to change the channels, or making a cup of tea for my wife,” he said.

Jack is now using a wheelchair and walking aid and he is on pain medication most days because walking can be painful.

His worst moment in the past seven months he said was the video call to Patricia before he was put into a coma.

“That was really hard. We didn’t know what way it was going to go. Then I lay down, the doctors gave me an injection and I was out.

“When I did eventually come around, for the first two or three weeks it was very confusing. Everything was upside down. I knew I was in hospital, I knew I was sick but it was a mishmash. From then on it was just a road to recovery and it still is.

“I had to relearn everything, first how to talk and to swallow and then to move. Literally everything. My muscles had wasted. When I woke up originally I couldn’t even move,” he said.

He is attending hospital now several times a week as he continues his recovery, with medical staff coming to his home as well.

“It’s been a long road to get here but there is still a long road to go with my mobility. Physically I lost a lot of strength. My granddaughter visited and asked me to lift her onto my lap. I couldn’t. It was heartbreaking but she understood,” he said.

Jack has beautiful words to say about Patricia and his family.

“My wife has just been amazing through this. I was the sick person but she kept things going so well, even now I’m home. I have no words to describe what she has done for me. I love her so much. We were so lucky to find each other, she’s my soulmate.

“With Pat I feel like I’m the luckiest man in the world. She is a fantastic wife. There is still a lot I can’t do for myself, and hopefully in time that will change and turn around and then I can give her a rest. What she did for me I would do for her.

“My daughters Amy and Jessie have been amazing too. Amy is here to help when Pat is out, and Jessie has two kids and works but she would do anything for me at the drop of a hat. She was there 100% for us at the hospital.

“I am very lucky. To have had the doctors I had, the staff in the hospital were fantastic. All of them, not just the doctors and nurses, but the assistants, the catering staff, the cleaners, down to the guys taking the rubbish out. They are all part of the hospital and doing a major job. I’ll be eternally grateful to them for what they did for me,” he said.

He thanks Portlaoise Intensive Care Nurse Gerard Hosey too, who walked 100 miles this summer to raise €4,000 for the ECMO unit in the Mater hospital.

“Fair play to him, I’m glad I inspired him to do it. I thank everybody who donated to it. It’s a drop in the ocean for what they deserve,” Jack said.

He urges people to continue to be careful about spreading Covid-19.

“I can’t tell people what to do, everybody has their own mind. Just be careful, if you don’t feel safe going into somewhere full of people, use your common sense. Before this happened I’d have been very optimistic about Covid. You don’t realise until it happens to you,” he said.

Read about Nurse Gerard McHugh's donation to the Mater hospital below.