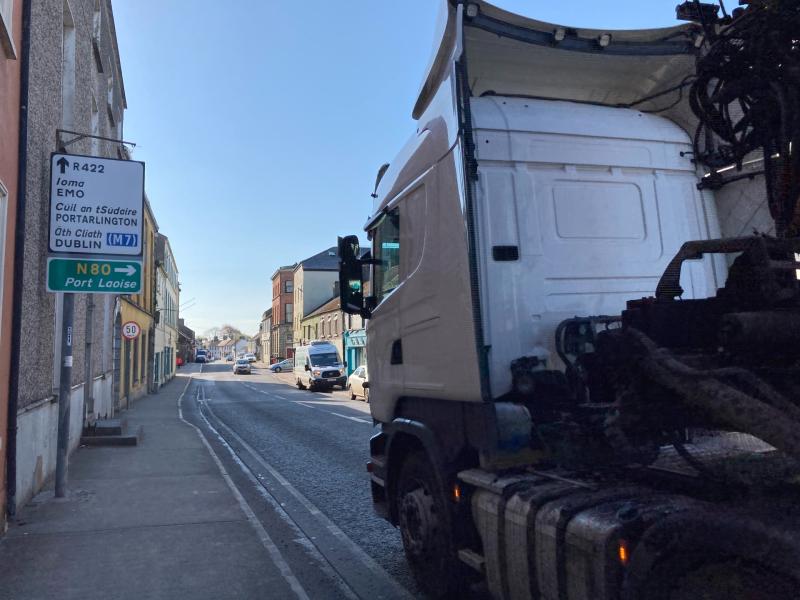 The failure by Government to prioritse a bypass of Mountmellick in the National Development Plan up to 2027 could result yet in a public protest blocking heavy N80 traffic through the town centre.

Speaking at the Joint Policing Committee meeting, Bobby Delaney a former Town Councillor said it was considered before and would be "a last straw".

He raised the need again for a bypass of the town, and an upgrade of the Portlaoise to Mountmellick N80 stretch, the recent scene of two crashes.

"We don't call it the N80, we call it the bog road. In 2008 when we had a Town Council the people wanted us out on the road to hold up the traffic in a protest. That's the last straw.

"I'm old enough to remember when Main Street Portlaoise was the main Cork to Dublin road, then they got the new road and it opened up to town. Mountmellick is being hammered day in and day out with vehicles bringing no benefit to our area.

"I feel really sorry for tractors on the Portlaoise road too, they have nowhere to pull over.

"I raised this at the last JPC and I got a good answer but I don't think Mountmellick will get a relief road or the N80 will be repaired. Could we send people to meet the National Roads Authority? I'd love to see our CEO and the Garda Chief attending," he suggests.

"I raised this last week in the Dáil. With Brexit a lot more traffic is going to New Ross and that is more HGVs through Mountmellick. A local haulier told me a bypass would be fantastic, it would shorten the journey and cut emissions. There is a €100,000 feasibility study done and that's there with selected routes.

"Another issue is the junction at Derrycloney, I haven't seen the speed van there in a while so maybe that's an issue.

Cllr Paddy Bracken from Mountmellick said he will support any effort to deliver a bypass.

"This is a vital piece of infrastructure. There has been a few bad accidents at Derrycloney Bridge. I've raised this on several occasions," he said.

Chair of the JPC, Cllr Ashling Moran said that Transport Infrastructure Ireland (formerly the National Roads Authority) had been invited since September to send a representative to hear about Laois road issues from councillors.

"They said they meet councillors from all over the country. It's scandalous that they bypassed us," she said, requested that another invite be made for the TII to attend a Joint Policing Committee meeting as well.

No beds in Portlaoise hospital as Covid surges in Laois