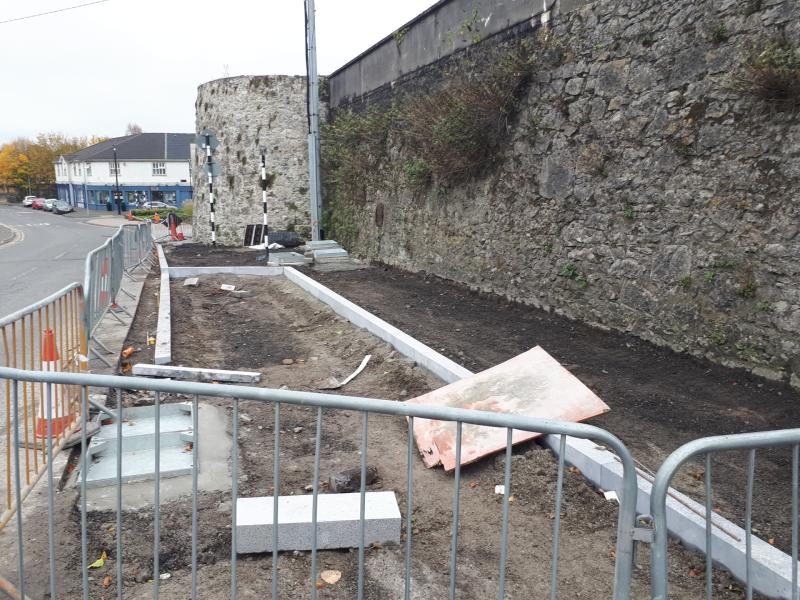 The pace of Portlaoise roadworks to upgrade footpaths and the streetscape around the town's historical fort, have been criticised.

Works got underway on footpaths around the Tower Hill roundabout in October but the speed of the work has been criticised by a Portlaoise councillor after a trader also complained.

The job is a €680,000 upgrade of the streets near the town's 15th century Fort Protector. It includes new limestone footpaths, undergrounding of overhead wires, attractive street planting and new streetlighting.

There will also be a second stage of conservation works to the Old Fort wall itself, and the footpaths will be wider with crossing zones for pedestrians of all abilities, including a controlled pedestrian crossing near Tower Hill roundabout leading to schools.

The works are Phase II of the Portlaoise Cultural Quarter Fort Protector. The aim is to improve the visual setting and presentation of Portlaoise's historic cultural centre for visitors, and tie it in with the upgraded garden at Fitzmaurice Place.

Cllr Caroline Dwane Stanley says local traders are unhappy at the pace of the work, and said that she had been told by a council staff member that the project would be finished by January.

That date will be more like March, according to Portlaoise Town manager Simon Walton.

"There was a delay of a week on the papers. Others surrounded archaelogy. There have been finds dating back to the 15th century," he said, speaking at the November council meeting.

"The intention is to have 10 parking spaces and have the majority of them available in the lead-in to Christmas. It was never the case that this work would be completed in January, It will be early 2022, perhaps in March," he said.

Cllr Dwane Stanley asks a letter go out to businesses to inform them.

"They are exercising their frustration on social media. Also there is a risk with barriers . There is no excuse for that. Anyone who would walk off and leave a site in that state, with small bricks on the side of the road. This needs to be addressed," she said.

Portlaoise trader Jack Nolan had complained on social media that the work was going "at a snail's pace".