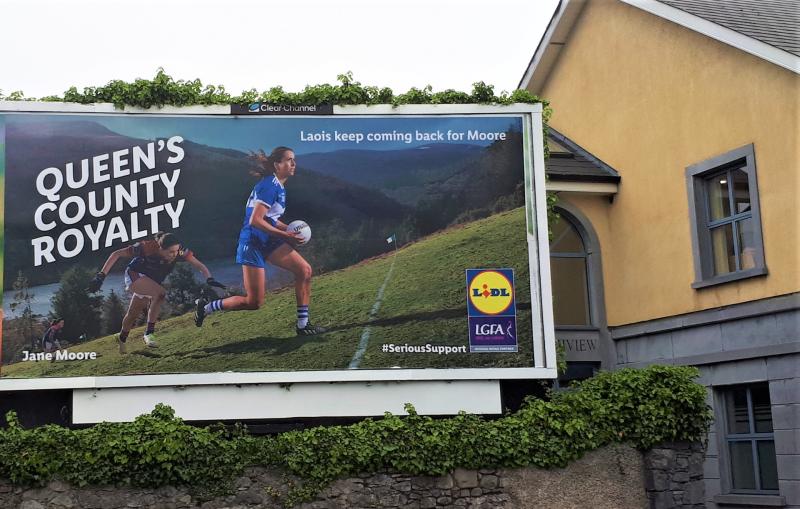 The German-owned supermarket chain Lidl is set to remove a billboard ad in Portlaoise which used the word Queens County to promote the Laois Ladies Gaelic Football team.

The company issued a statement in the wake of a story by the Leinster Express on Laois Live which revealed that the name used during the colonisation of Ireland was front and centre of an ad erected in the heart of Portlaoise.

"During the creative process for this campaign Lidl were given two options per county from our design agency. It seems that for Laois this option was incorrectly sent to print, the actual one chosen by Lidl should say “Coming back for Moore”.

"We are removing and replacing the creative it immediately and apologise for any offence it may have caused," said a statement.

It's understood that the decision to remove the offending billboard was taken swiftly following consultation with the Ladies Gaelic Football Association (LGFA) which is sponsored by Lidl.

Jackie Cahill is Commercial and Communications Manager at the LGFA which is based in Croke Park but run separately to the GAA.

"During the process, I received a selection of the artwork before going to print, but this version for Laois, which I understand is being corrected, never crossed my desk/mailbox.

"On behalf of the LGFA, I apologise for any offence this version may have caused," he said.

The billboard was located opposite SS Peter & Paul's Parish Church.

"Given the long struggle for independence and the suffering that was bought on County Laois people by Centuries of British occupation , its disappointing that the former colonial terms would be used to describe our county," said the Portlaoise Municipal District representative.

Queens County was the name given to Laois by Mary I, daughter of Henry VIII. Under her rule the English launched its colonisation expansion beyond the Pale in Ireland. Native clans like the O'Moores were murdered or expelled with land confiscated and planted by the English.

The success of the colonisation experiment in Laois and Offaly was repeated by the English for centuries around the globe in building its empire.