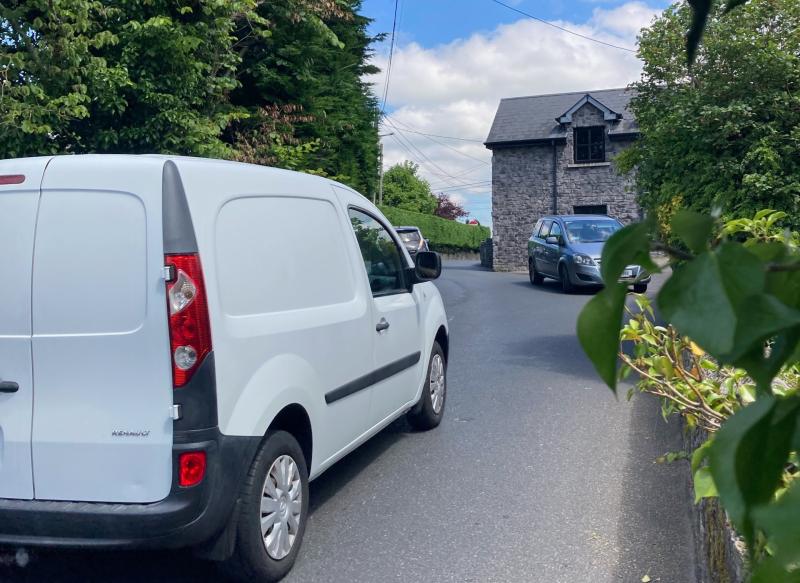 The busy Green Mill Lane has a "very dangerous corner" at one end, and is in dire need of a roundabout at the other, with big lorries making the safety situation even worse.

The two way road has only room for one vehicle where it narrows to meet the Ridge Road, where the road twists around a stone bridge and a house.

Meanwhile its junction with the N80 Mountmellick Road at Dunnes Stores is one of three on that busy road awaiting money for years from Transport Infrastructure Ireland for new roundabouts.

The dangers on Green Mill Lane were highlighted again at the Portlaoise Muncipal District June meeting.

Cllr Caroline Dwane Stanley asked in a motion what are the recommendations resulting from a recent road safety audit, carried out by Laois County Council.

"I have been contacted by residents about this extremely busy road, it has gotten busier since the refurbishment of Dunnes Stores. It is also a built up area with five housing estates using that road. The road is extremely narrow and that is causing diffi culties.

"We badly need a roundabout there with the expansion of Dunnes Stores. As you exit you are blindsided, I hope the audit takes that into consideration," she said.

Cllr Willie Aird describes the junction to the Ridge Road as a "very dangerous corner".

"It is a huge pinch point. I'd be very surprised if this wasn't in the top five most used roads in Portlaoise for its size. You have cyclists using it as well. There was an old arch on that road, it was very small. If it was today you wouldn't be allowed to take it down because of preservation orders.

"Maybe talk to the owner of the house and try to make the stop sign more visible," he suggests.

Articulated lorries are getting stuck on the road, Cllr Thomasina Connell reported.

"I've seen it five or six times. We are a modern town, but this junction is in the dark ages.

"I was told that it would be huge money to rectify it, involving compulsory purchase orders as it would affect people's properties. Is there any progress to look at that? Could it be done? It would take time but we have to start somewhere," she said.

The audit is an interim measure, according to Simon Walton is Portlaoise Town Manager.

"There is no doubt that the ideal solution involves acquisition of third party properties. It was with a view to minimising issues that the safety audit was done. We are seeking to find what can be delivered in the footprint of the existing public realm, to minimise interferance with properties, that would represent a significant improvement," he said.

"It's one of those roads that you think is quiet but is very busy," he said.