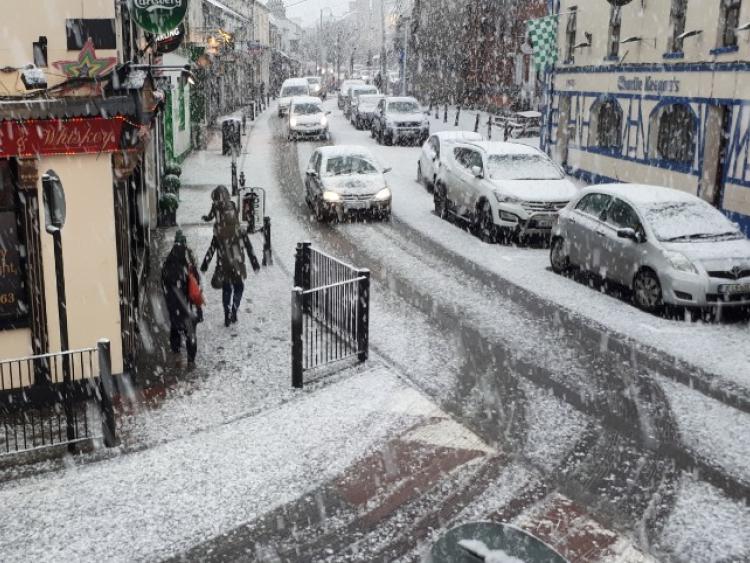 The view from the Leinster Express offices on Main St, Portlaoise.

More snow and strong winds will make for treacherous and hazardous driving conditions this evening and tonight.

Snow began to fall around 2.45pm in Portlaoise and, despite a day of rain, is already accumulating on roads and buildings.

An status Orange weather warning was issued on Tuesday morning for West to northwest gales on all Irish coastal waters and in the Irish Sea at times today, reaching strong gale and possibly storm force along west and south coasts.

A Status Yellow Wind Warning is also in place for the west with southwest winds veering west to peed was 45 to 65km/h will gust up to 85km/h. This was altered on Wednesday to 50 to 65km/h with gusts between 90 and 110km/h. Winds possibly higher for a short time this evening along western coastal areas.

Winds will be strongest for western areas with Galway, Mayo, Clare, Cork, Kerry Limerick bearing the brunt of the storm.

A Status Yellow rainfall warning is also in place for heavy thundery downpours over the next 24 hours are likely to lead to rainfall accumulation of 30 to 50mm. This is valid from Wednesday, December 13 1pm to Thursday, December 14 1pm.

The weather forecaster's predictions for last weekend were accurate when an Orange alert brought heavy snow and freezing conditions to the .

During the forecast, Joanne Donnelly warned of treacherous driving conditions.

Wednesday night will be very windy, with strong and gusty westerly winds and gales or strong gales at sea. There will be some clear spells, but scattered showers also, some wintry, especially over high ground and there is also a risk of thunder. Min. 0 to 4 Celsius, with a slight frost in sheltered places

Thursday will also be cold and very windy, with a mix of sunny spells and showers, some of the showers heavy and of hail, with a continuing risk of thunder. Some wintry showers of sleet are likely, with a risk of hill snow. Maximum temperatures4 to 8 Celsius, in fresh to strong westerly winds, up to gale force along west and southwest coasts.

Winds will veer northwest in direction Thursday night, gradually easing. Showers will become confined mainly to northern, western and southwestern coastal counties, some of wintry, with a few wintry showers further inland also. A cold, frosty night, with icy patches, especially in the , east and north, but less cold in Atlantic coastal areas.

Friday is set to remain very cold, but mainly dry, with good sunny spells and just a few scattered showers, mainly in the north and northeast. Max. 4 to 8 Celsius, in moderate northwesterly winds. Winds will slacken further on Friday night and it will be mainly dry, but very cold, with widespread frost and icy stretches.

Saturday looks like it will remain cold, with frost and ice clearing only gradually during the morning. Mainly dry, but some wintry showers are possible at first, mainly in the north. Max. 4 to 8 Celsius. More widespread rain will spread from the Atlantic during Saturday night and it will become milder.

Met Éireann says the indications are that the early days of next week will be relatively mild, but changeable and unsettled.