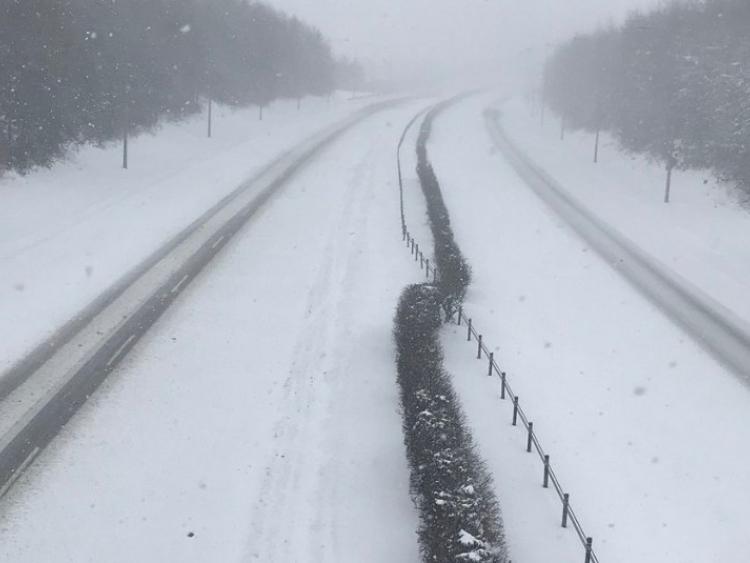 M7 motorway Portlaoise at the height of Storm Emma.

People planning to get to work in Kildare or Dublin on Monday morning may face difficulties as work is continuing clearing roads in the county including the M7 motorway.

The Gardaí have issued a Traffic Alert for M7 Junctions 10-9 (Newbridge - Naas).

They say Transport Infrastructure Ireland (TII) are currently in the process of clearing snow from the M7 between Junction 10 and Junction 9 inbound.

To facilitate this Gardai are conducting rolling road closures between Junction 10 and Junction 9. The Gardaí ask motorists travelling this route to reduce speed and exercise caution on approach.

Kildare County Council has said many roads around the county remain treacherous.

Laois County Council announced on Sunday that all main routes including the motorway were clear and it was working on clearing other roads with contractors and farmers.

Bus runs on Monday provided by Bus Éireann will depend on the state of the roads.

The National Emergency Co-ordination Group has urged employers to stagger work start times and allowing employees to work from home. It also advises the public to use public transport to get to work where possible.

Transport Infrastructure Ireland (TII) are in the process of clearing snow from the M7 between J 10 and J 9 inbound. Gardai are conducting rolling road closures between Junction 10 and Junction 9. We ask motorists to reduce speed and exercise caution on approach. pic.twitter.com/a5LXKIc5HV