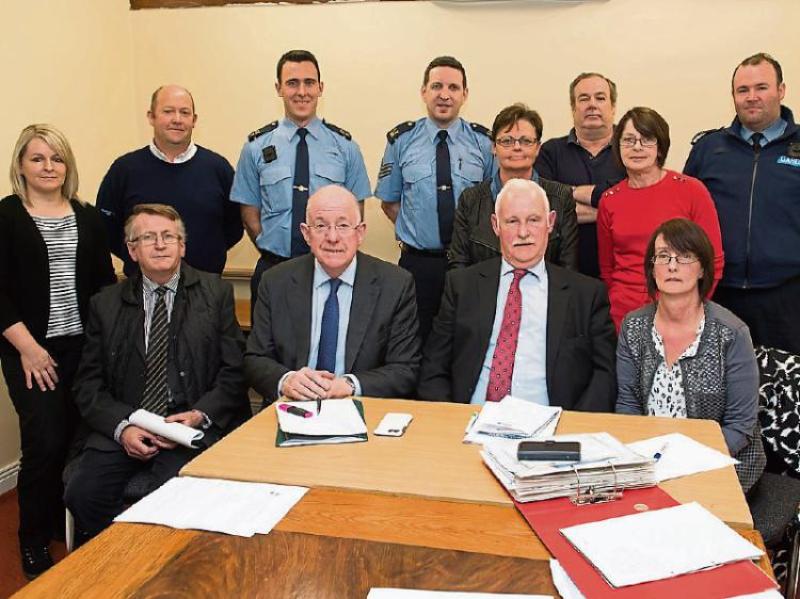 The Mountmellick Neighbourhood Watch Group is appealing for more public support in a big fundraising effort to erect cameras in the battle against crime and anti-social behaviour.

The estimated price of the CCTV is up to €40,000. The committee expects the Department of Justice to cover the majority of the cost but must raise substantial funds locally.

Anyone who wants to drop off any goods for the sale of work can do so on Saturday, April 14 at 11.30am.

It is planned to locate the cameras at all roads in and out of the town, and a few areas around Mountmellick. It is estimated that twelve double cameras will be needed in total.

Barbara Lalor is the secretary of the committee which has worked tirelessly over the last year to fundraise for the initial costs.

"We hope to put cameras at every entrance and exit into the town as well as some strategic locations in the town for the security and peace of mind of the community.

“The cameras will have to be maintained, we have to have the money. We have met with necessary people and there is a huge amount of paperwork, it has been slow and a lot of work but we are getting there now.

“We have been lucky to work with Sgt Mick O’Connell in Mountmellick Garda Station and we have a great committee.

“Mountmellick people are phenomenal and they always put their hand in their pocket. It is often the same people and businesses and I would like to thank anyone who has helped us fundraise for the CCTV cameras on behalf of the committee.

“The information gathered on the cameras will be dealt with in a private and confidential manner. Data protection policies will be taken into account and it will be managed professionally. We will be working with gardai and the local council to make a safer community,” she said.

Barbara added that the extended hours in the Garda Station in Mountmellick has already made a difference locally.

"The station is open more and it has helped a lot. There is an open door policy there now and it makes such a difference in the community particularly with the peace of mind of elderly people," she said.

Several groups in Laois have already been forced to turn to cameras to keep out the criminals. These range from small villages like Errill to towns the size of Mountrath.

Portlaoise has cameras are controlled by the Gardaí but there is no official system in the other two big towns, Portarlington and Mountmellick.

In April 2017, the former Tánaiste and Minister for Justice and Equality, Frances Fitzgerald announced a new grant-aid scheme to assist the establishment of community-based CCTV systems.

Under new the scheme, eligible community groups can apply for grant-aid of up to 60% of the total capital cost of a proposed CCTV system, up to a maximum grant of €40,000.

Upon approval of the grant, the applicant will receive an up-front payment of 50% of the grant with the balance to be paid when the system is fully operational.

The Department of Justice says some of the key objectives of the Scheme are to enhance existing policing provision within the community, to assist in the prevention and reduction of local crime, disorder and anti-social activity and to increase community involvement in the provision of legitimate, integrated responses to prevent and reduce crime in local areas in association with appropriate agencies.

In June 2017, Mountmellick TD Charlie Flanagan took over as Minister for Justice. Minister Flanagan has played an active role in helping with the CCTV cameras.

Famous Portlaoise airman to be commemorated on 90th anniversary of transatlantic flight.

Over €85,000 funding grants for 14 protected structures in Laois.