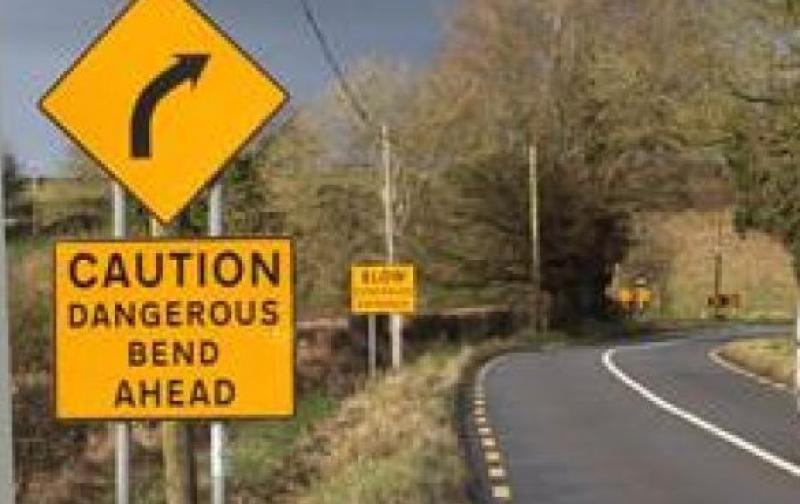 Laois County Council’s staff have been asked to look at road safety work done in Kilkenny as part of improving safety at the most dangerous bends in south and west Laois.

The proposal was made by Cllr James Kelly, Independent, when he and other councillors met officials at a recent meeting.

Cllr Kelly tabled a motion calling on the Council to carry out a survey in the Borris-in-Ossory/Mountmellick Municipal District Area to identify its “most dangerous roadway bends”.

He also called for money to be secured to install flashing warning enhancements on the already fixed chevron warning signs.

He gave an example in neighbouring Kilkenny.

“It is a very dangerous bend on the road between Bennettsbridge and Thomastown. There are really bad bends at a railway bridge. It (measures taken) does alert you,” he said.

He said motorists are driving faster on roads that are not safe for speed.

“Most crashes do not happen on motorways but on rural, county or urban conventional roads. Most dangerous bends related injuries and fatal crashes involve single vehicles and hitting fixed obstacles,” he said.

As a result he proposed that chevron signs need to be erected alongside existing signs. He added that survey, while it may involve resources, is needed for safety reason.

Cllr Ollie Clooney, Independent, said money to make safe a dangerous bend he knows was not spent because land could not be secured to carry out the work.

Mr. Edmond Kenny, District Engineer, said the Council will meet the Cllr Kelly to identify locations of concern with a view to undertaking a survey of these locations.