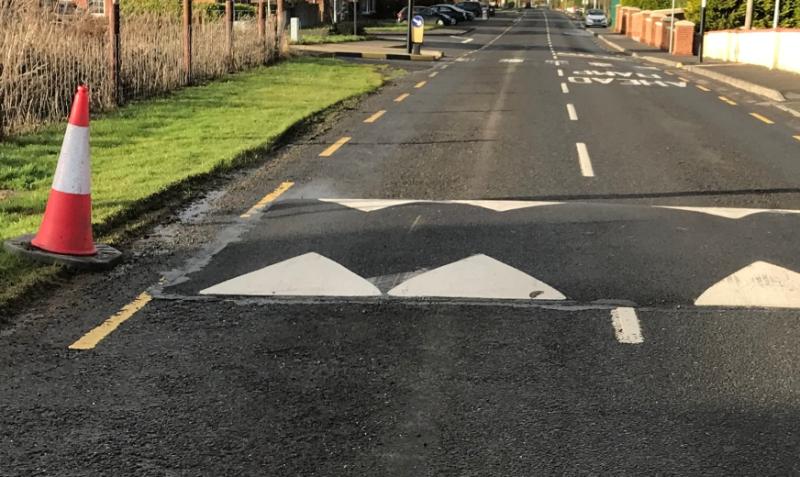 A recently built private Portlaoise housing estate is getting more speed ramps installed at the cost of the taxpayer.

Councillors have questioned Laois County Council why developers are not told to add speed ramps while they are building housing estates, footing the cost themselves.

Such an estate is Bellingham on the Mountrath road, highlighted by Cllr Thomasina Connell.

Her motion tabled to the September meeting of Portlaoise Municipal District  requests an update on when more ramps are going in.

“I was contacted by residents and I walked around with them and identified a couple of locations. I threw in some of my discretionary money to get them done,” she said.

The motion was seconded by Cllr Caroline Dwane Stanley.

“Years ago there was a residents association and its great to see a new one now. I put in four ramps from my discretionary funding. The last one was after a little girl got knocked down and her leg broken. One side of the road is not taken in charge, there is an onus on us to ensure that that part is taken in charge,” she said.

Cllr Willie Aird noted that Bellingham is “one of our newest estates”.

“How come that didn’t come with the estate? How was it changed so quick? You have to have sight tests and reports, the mind boggles,” he said.

“Safety is at the forefront of road design, that’s why chicanes are added and straight sections are only of a certain distance. Ramps to me are a retrofit, but if good design is there in the first place they shouldn’t be needed,” he said.

“The realism on the ground can bring a different sense of urgency,” area engineer Wes Wilkinson added.

His reply to Cllr Connell’s motion stated that the ramps will be installed by mid October.