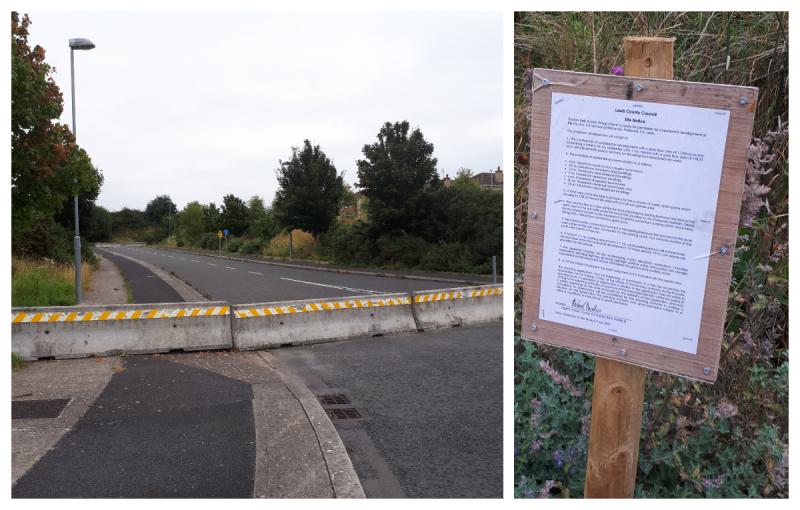 County councillors from the main political parties have unified against 99 new homes being built in Portlaoise.

Public representatives from Fianna Fáil, Fine Gael, Sinn Féin and Labour have co-signed a submission to Laois County Council objecting to the houses and apartments earmarked for the Borris Road area of town. A creche is also planned.

All seven Portlaoise Municipal District councillors have lined up alongside hundreds of households in the area. They are objecting to the project planned by Thomas Kelly and Sons Group comprising of O'Ceallaigh Westfield and Thomas Kelly & Sons Ltd.

In their letter the councillors say the development is 'premature' in light of what they claim to be a fact that the infrastructure needed is not in place.

They also contend that the land was zoned when the Portlaoise Northern Orbital Route was to be built alongside the land. This road was not built and may not be constructed but the Borris Road has been substantially upgraded in recent years.

The councillors say the traffic in the area is 'intolerable' caused by traffic jams and delays of up to 45 minutes especially during school term. The houses are located near two big secondary schools.

"The safety concerns of residents and students from second level schools in the are is regularly brought to our attention. Adding additional house without a proposal to ease the traffic problems will only add to the chaos," the say.

The councillors also claim that the site has also been identified as a flood plain.

"The proposed development on this elevated site raises serious concerns and worry to adjoining estates who already had flooding and sewage problems in their homes," the say.

The councillors have also told planners that Irish Water has already said that it has no plans to upgrade drainage or the local pumping station to deal with wastewater from the development," believe the councillors.

The say foul water and drainage is already a serious issue in the Rathevan area.

The councillors ask: "Who will be held accountable should this application go ahead?"

The latest development is the third housing project planned for the land. All have involved the Kelly Group. The most recent was abandoned in October 2020. The developers had hoped to build some 200 new homes via the strategic housing application process through An Bord Pleanála. This plan was also opposed by councillors and residents.

Thomas Kelly & Sons Group has also lodged an application for 30 new homes on a separate site at Limetree Avenue in nearby Kilminchy.

A decision on the planning application is due to be made by Laois County Council by September 2.