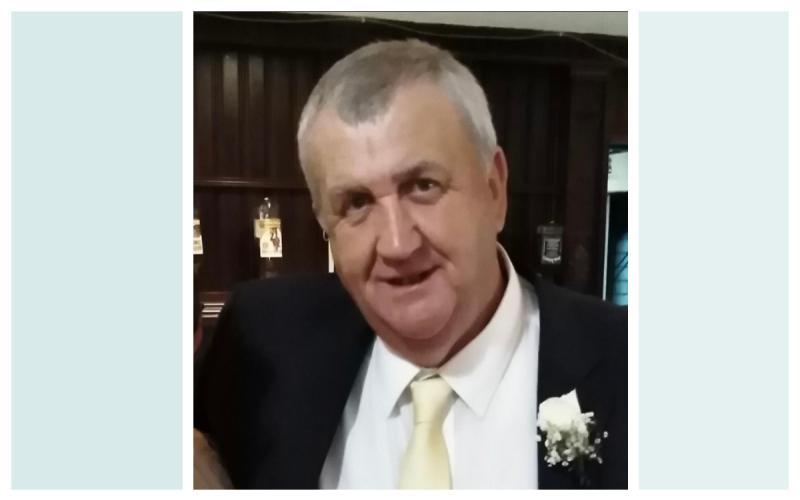 The death of Abraham John (Abe) Kavanagh, Ballymeelish, Ballybrophy caused much shock and sorrow in the local area and beyond. Abe died suddenly at his residence on Christmas Day December 25.

His remains reposed at his residence until removal on Thursday December 30 to St Mark's Church Borris in Ossory for Funeral Service, followed by burial immediately afterwards in Derrinsallagh Cemetery Borris in Ossory.

The late Abe is deeply regretted by his loving wife Helen, sons John and his wife Niamh, Colm and his partner Mary, David and his partner Emily, daughters Sarah and her fiance Kieran, Alison and her partner J.P., grandsons A.J., Dylan, Cillian and Alfie, mother in law Lily, brothers in law and the extended Sheeran family, cousins, relatives, neighbours and his many friends.

Abe was a member of the farming community who had a great affinity with nature. He was a good neighbour and friend, always willing and available when neighbours needed his help. He was also well known as a gravedigger, who helped to prepare the final resting place for many people in this community and elsewhere.

He was very interested in all outdoor pursuits including fishing, hunting, shooting and coursing. He loved all sports and was a talented pool and snooker player. However Abe’s first love was hurling, he was a member and supporter of the local Borris in Ossory/Kilcotton GAA club, and was a dedicated ticket seller for the weekly GAA fundraising Lotto draw. He played with Kilcotton and Borris in Ossory hurling clubs in his younger days and was full forward on the Borris in Ossory team which won the Junior B Hurling Championship in 1983. They defeated Cullohill in the final, on a scoreline of 3-13 to 2-4 and Abe scored all three goals.

Members of Borris in Ossory/Kilcotton GAA club, joined by some members of neighbouring clubs, formed a guard of honour at his funeral and the club flag at O’Keefe Park was flown at half-mast as a mark of respect. His neighbours and friends lined the route from his home to St. Mark’s Church and also from the Church to the cemetery, a real testament to his popularity.

The club extended sincere sympathy to the Kavanagh and Sheeran families on the sudden death of Abe. They praised his immense contribution to the financial upkeep of the club, particularly through the weekly lotto draw, was legendary and will be sadly missed. However, they said Abe's contribution on the hurling field was equally legendary. Never more so than his contribution at full forward on the Junior B championship winning team of 1983. The club said the stories of that win will always be remembered with affection whenever Abe is spoken about.

May Abe rest in peace.

*The Leinster Express wishes to extend sincere condolences to Helen the Kavanagh family on the passing of Abe.