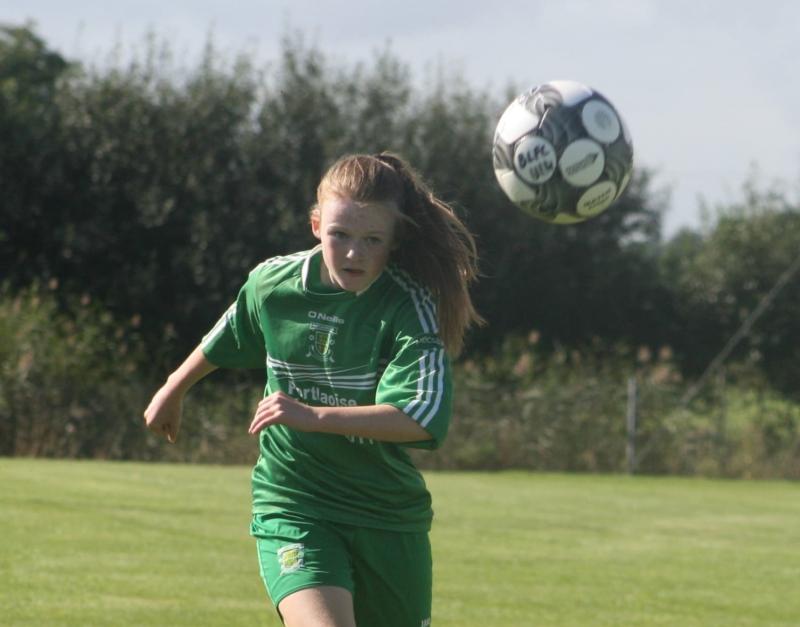 Ava Donovan was rock solid in the Portlaoise defence

Portlaoise Girls U14s travelled to Bealnamulla on Saturday morning for their third league game of the season.For different reasons both teams were down to low numbers but with that comes opportunities for others on the panel to step up.

From the off Portlaoise dominated possession with Sally Morgan and Ciara Breslin limited to long range shots. Bealnamulla defended brilliantly and it would take some effort to break the red wall down and their excellent keeper.

Maisie Kerry, Keelin Moore and Niamh Dundon came close but the deadlock could not be broken. It took a Sally Morgan shot from just outside the box to make it 1-0, the keeper saved but parried it back into Morgan’s path and she finished calmly into the net.

The Portlaoise defensive line of Anna Keegan, Niamh Dundon and Ava Donovan were alert to any Bealnamulla danger but all in all they worked very well together. Saoirse Carroll was excellent on the wing, as was Emily Bawa on the left and they supported the front three brilliantly. 2-0 came soon after with a Ciara Breslin finish to add to her tally for the season.

In the second Moya Ramsbottom and Layla McGonnell came on and slotted into the team perfectly. Emma Francis controlled the midfield but again, Bealnamulla were resistant to the threats. Finally, the third came as Breslin assisted Maisie Kerry to make it 0-3.

From there on it was the Maisie Kerry show as she hit in another two for the hat trick. Brave Bealnamulla finally starting to tire. Leah Brophy arrived on for Breslin and set up Kerry’s forth and Anna Keegan hopped into goal for a good stint near the end.

Collectively, it was a very very good performance by Portlaoise as younger players such as Emily Bawa, Layla McGonnell and Moya Ramsbottom made their point for a first team starting position. Young Bealnamulla were excellent in their endeavor. They were organized and determined to stop Portlaoise and for much of the game, that’s what they did. Portlaoise stay top of their league for now but with plenty of games left anything could happen.

Player of the match: Maisie Kerry