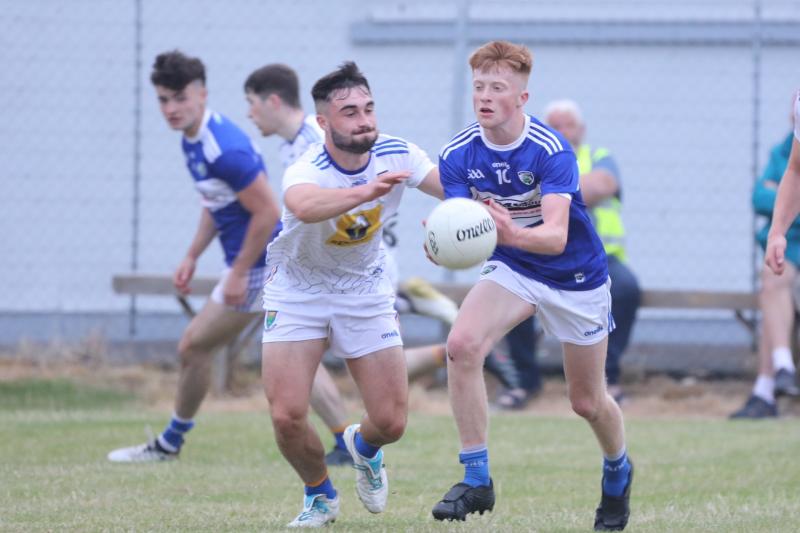 Laois were pipped at the post and knocked out of the Leinster U20 football championship on Thursday night after they went from being three points up with six minutes to go in normal time to lose by three.

Wicklow levelled the game just as injury time began but a late and controversial Wicklow goal gave the home side the win.

Referee Alan Coyne was the centre of attention late on as both the late Wicklow goal and their equalising score before that had big question marks over them as regards frees not given in the build up. There equalising score came when Eamon Delaney was down with a head injury and their winning goal came after full back Malachy Stone looked to have picked the ball up off the ground.

Colin Dunne landed the first score of the game from a well struck free and although Johnny Keogh replied with a placed ball of his own for Wicklow, Laois were about to steal a march.

With seven minutes on the clock, Kevin Swayne burst through the middle after intercepting a kickout and after travelling towards goals, he laid off to Rioghan Murphy who coolly dispatched the to the net to put them 1-1 to 0-1 ahead.

Eoin Darcy got his first score of the half when he palmed over but the goal chance was there and it was a let off for Laois.

Wicklow inside forward Kevin Quinn was causing problems for Laois but a switch that saw Sean Greene move in on him and Adam Dunne move out the field, culled that threat to a certain extent.

Rioghan Murphy converted a free on 15 minutes but with the last kick before the water break, Wicklow drew level. Cillian McDonald sent in a lovely diagonal ball for Eoin Darcy to fetch and fire to the net to leave it all square at the water break.

Laois came out strong after the restart and three frees in three minutes from Murphy and two from Colin Dunne had them back in a three point lead.

Four minutes before the break, Adam Dunne started a move way out the field, continued his run and when Damon Larkin fed him 21 yards out, Ballyroan man Dunne made no mistake in finding the corner of the net.

Laois now had a decent cushion but Wicklow responded with the last two scores of the half from Johnny Keogh and Kevin Quinn to bring it back to a one score game at half time - 2-5 to 1-5.

Wicklow were dealt another blow just on the stroke of half time when wing back Craig Maguire was shown a black card meaning he missed the opening 10 minutes of the second half and Wicklow were down to 14.

Laois made hay early in the second half when Kevin Swayne kicked a monster score to stretch the gap out to four points but the couldn't capitalise any further before Wicklow were brought back to their full compliment.

Wicklow then fired over the next two scores and at the second half water break, Laois only led by two points - 2-6 to 1-7 despite having an extra man for 10 of the opening 15 minutes of the second half.

Laois had a great chance to put the game to bed shortly after the water break but as Adam Dunne bore down on goal, his shot blazed over the bar to make it 2-7 to 1-7.

Wicklow introduced Matthew Ging with 10 minutes to go and with his first kick, he floated over a left footed free to narrow the gap once again to two.

Every time Wicklow got within touching distance, Laois had the answers. Rioghan Murphy fed Colin Dunne and with the Arles Killeen man coming around on the loop, he bisected the posts to restore their three point lead.

Wicklow were fighting to the death and two frees from Matthew Ging left it a one point game as the game moved into injury time. Ging then popped up again with a point from play to level the game but there were question marks on whether the play should have proceeded due to Laois wing back Eamon Delaney being down with a head injury.

There was more, late disaster for Laois and more controversy in fact when Wicklow found the net deep in injury time with Eoin Darcy grabbing his second goal from close range but there were big question marks on whether the ball was picked clean up off the ground.