Laois knocked out of Minor hurling championship by fired up Kildare 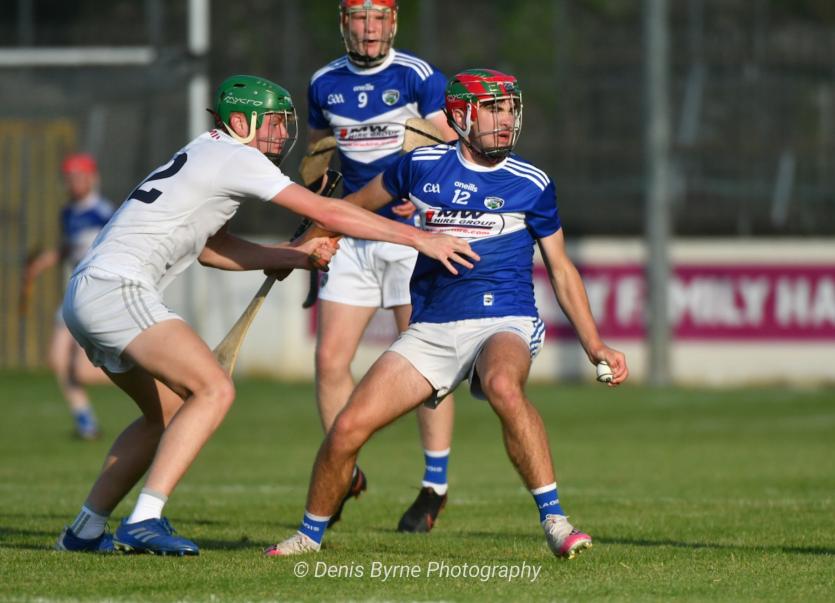 Laois have crashed out of the Leinster minor hurling championship after a Wednesday night trip to Newbridge failed to yield any rewards.

In truth, Kildare were the better team by a distance and never looked like losing the game after they fired home their opening goal in the fourth minute. Laois had 15 wides throughout the game as a much slicker Kildare side were deserving seven point winners.

With Kildare on a crest of a wave from their U20 win over Wexford on Tuesday night, they got off the mark for the perfect start with wing forward Fionn Maher firing over a free. Colin Byrne replied with a Laois free at the other end but with the very next attack, Kildare struck for the opening goal of the game after James Dolan got in behind and coolly fired home.

Byrne was keeping Laois in touch with frees but Kildare were by far the better side in the opening quarter with two massive long range scores from Alan Tobin stretching their lead.

Kildare led 1-4 to 0-4 at the water break but to their credit, Laois upped their performance in the second quarter. Two goal chances went abegging in the space of a couple of minutes with Liam Kavanagh and Colin Byrne both foiled in their quest for a green flag.

While the Laois performance improved, their shooting was letting them down and they would go on to amass nine wides in the opening 30 minutes.

Points from Brian Duggan and a super catch and score from Jer Quinlan brought it back to a two point game but in the last four minutes of the half, Kildare hit 1-3 without reply to take a stranglehold on the game.

With the last play of the match, a long ball was sent in from Kildare but as kepper Brochan O'Reilly came out to claim, he misjudged the flight of the ball and as it spilled to the ground, James Dolan was on hand to get his second goal and send the Kildare men in leading 2-8 to 0-6 at half time with Laois having only been two points down with 28 minutes on the clock.

Laois began to eat into the lead early in the second half with Brian Duggan and substitute Jack Breen making their mark on the scoreboard. With the gap now six points, Kildare awoke from a small slumber and points from Niall Dolan, Fionn Maher and Seamus Kelleher restored their healthy lead.

Frees from Colin Byrne and Eoghan Cuddy got Laois back to within six with 18 minutes to go - 2-11 to 0-11 and they had renewed hope.

The gap stood at seven at the water break but Laois cut into that lead with two Eoghan Cuddy frees right after the water break to make it a two score game. Fionn Maher restored the six point margin before Aaron Phelan rambled up from centre back to cut it back to five once again.

Fionn Maher and Cuddy exchanged points again and with just over five minutes to go, Laois had five points to make up.

The goals they needed couldn't be found and on the night, they can have no complaints as a sharper, stronger Kildare side moved on to the next round.

James Duggan was once again in goal scoring form

13 games pencilled in for TG4 coverage; 50 streamed on the LGFA and TG4’s dedicated Championship portal