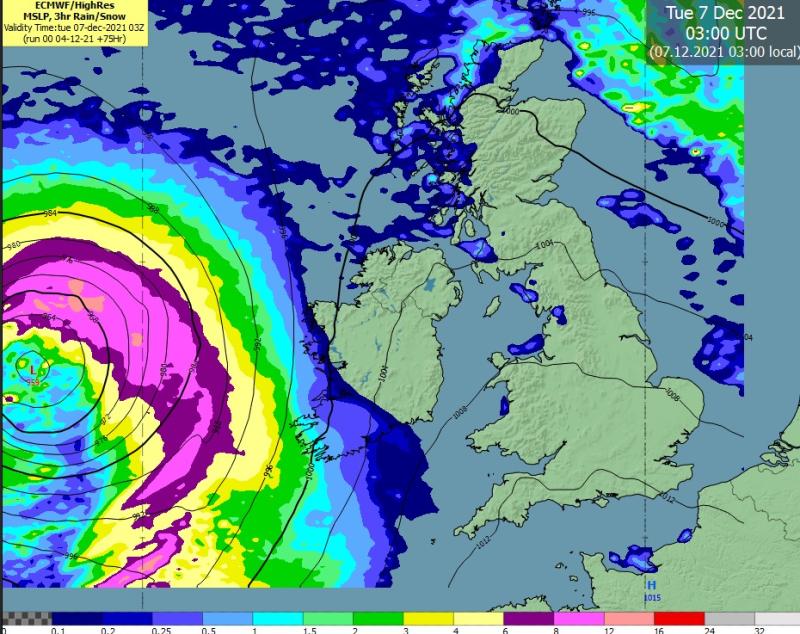 Met Éireann has named the extreme weather event heading for Ireland as Storm Barra and issued the first weather warning what is termed a weather bomb.

Through Tuesday and for a time on Wednesday, it says n Atlantic depression will bring very strong winds and spells of heavy rain across Ireland. Winds will be strongest in western coastal counties with severe or damaging gusts possible.
Heavy rain will bring localised flooding. There will also be high waves at sea and a significant possibility of coastal flooding on south and west coasts.

Apart from the storm, Met Éireann expect some wintry falls possible at times too. Settling down later in the week with possibly another spell of wet and windy conditions for the weekend. MORE BELOW LINK

Met Éireann issued a Yellow Wind Warning from 6am Tuesday, December 7 to 6am Wednesday.

However, further warnings will follow says the forecaster which says the maximum wind warning level is set at Orange. MORE BELOW LINK.

Storm Barra is the next named storm

Met Éireann's official storm weather forecasting partner expects low pressure in the Atlantic to suddenly intensify in a matter of hours in a pattern known as 'explosive cyclogenesis' or more commonly weather bomb.

NATIONAL FORECAST issued at 9.40am on Sunday December 5

SUNDAY: A cool and bright day, good sunny spells and a few isolated showers. Through the late afternoon and evening, cloud will increase from the west with rain developing on the west coast in the late evening. Highest temperatures of 5 to 9 degrees with light variable breezes.

Night will start off cold with frost developing over the eastern half of the country. Rain in the west will spread eastwards across the country and will clear overnight with clear spells and scattered showers following. Lowest temperatures of -1 to +4 degrees with moderate to fresh southerly winds veering westerly as the rain clears.

MONDAY: Cold, bright and blustery day with sunny spells and showers, some falling as hail or sleet. The showers will be heaviest and most frequent in the west and northwest where there may be some isolated thunderstorms also. Highest afternoon temperatures of 3 to 7 degrees with moderate to fresh, gusty westerly winds.

Cloud will increase early in the night with rain extending across the country from the west as the night progresses, it may be precluded by a period of sleet over higher ground in the northwest. Lowest temperatures of 0 to 4 degrees, but becoming milder with the arrival of the rain, while light variable winds become southeasterly and increase fresh to strong and gusty by morning.

TUESDAY: While there is growing certainty in a period of very windy, potentially stormy conditions on Tuesday, some fine tuning of where the strongest winds will be may be expected in the coming days. Currently we expect the rain to gradually clear east through the morning, followed, in turn, by sunny spells and scattered squally showers. Some of the showers will bring the chance of isolated thunderstorms, hail and sleet, heaviest and most frequent in the north and west. Highest temperatures of 5 to 9 degrees but feeling cooler in the fresh to strong southerly winds veering westerly later and reaching strong to near gale force or higher at times with some severe gusts, strongest in parts of the west and north.

Remaining very windy and locally possibly stormy near the coast overnight with scattered heavy blustery showers most frequent over the north of the country. Lowest temperatures of 2 to 6 degrees in fresh to strong and gusty westerly winds.

WEDNESDAY: Remaining blustery on Wednesday with periods of rain in Ulster and north Leinster, generally drier with showers mostly confined to western coasts, brighter too with some sunny spells. Highest Temperatures of 5 to 7 degrees in fresh to occasionally strong and gusty westerly winds.

There will be a mix of showers and clear spells overnight, some of the showers could turn to sleet, mostly over higher ground, as lowest temperatures dip to between 1 and 5 degrees while westerly winds ease mostly moderate.

THURSDAY: Thursday looks to be a drier day overall with showers mostly confined to coastal parts of the north and west, Cloud will increase in the southwest through the afternoon with rain extending across the country after dark. Highest temperatures of 6 to 9 degrees in light to moderate westerly breezes.

FRIDAY: Apart from coastal showers in the north and west it will be a dry and bright start with sunny spells, cloud will increase during the afternoon with rain extending from the southwest during the evening. Highest temperatures of 5 to 8 degree as mostly moderate northwest winds back southwesterly and ease mostly light by evening.

THE WEEKEND: Current indications suggest it will be unsettled weekend with a further spells of wet and windy weather on Saturday followed by showers on Sunday.