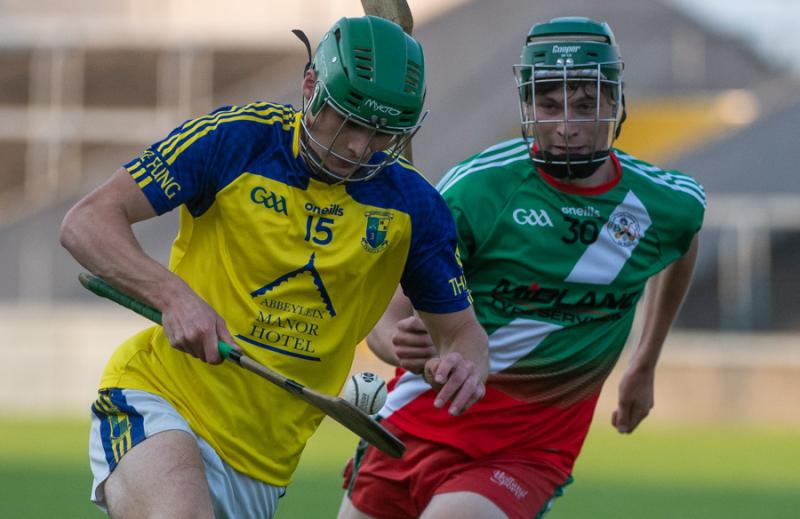 It could have went either way but Abbeyleix will consider it a missed opportunity as they came within minutes of taking the scalp of Borris-Kilcotton in the opening round of the senior hurling championship on Saturday night.

Abbeyleix were the better team on the balance of play but the experienced heads of Borris-Kilcotton hung in and fired the last two scores of the game to earn a point in Group B of the championship.

It took Abbeyleix just 49 seconds to open the scoring with Enda Rowland opening his account with a long range free. PJ Scully quickly cancelled that out and the sides were still deadlocked on 0-2 each after six minutes.

From here, Borris-Kilcotton got their noses in front with points from PJ Scully (free) and Emmet Jones giving them a two point cushion after 10 minutes.

Abbeyleix were staying in touch mainly through the frees of Aaron Brennan but it was the Borris-Kilcotton men who would go in leading 0-6 to 0-4 at the first water break mainly thanks to another free and sublime sideline cut from PJ Scully.

Abbeyleix then roared into life in the second quarter outscoring their opponents 0-10 to 0-3 as they carved openings clinically.

Ciaran Byrne fired over to start a four in a row spell with the other three scores each as good as the other one and all coming from midfielder Liam Delaney.

Delaney's third put Abbeyleix one in front on 23 minutes and they kicked on before the half time whistle. Ciaran Byrne was now finding room in the inside line while Aaron Brennan also shone in a two man star show in the full forward line.

Fionan Mahony landed one right on the stroke of half time while there was still time for Aaron Brennan to knock over another free and give his side a handsome 0-14 to 0-9 half time lead.

Brennan started off the second half with another free to stretch their lead but both sides were pretty even in the opening stages as a shootout ensued. PJ Scully landed his second sideline cut of the game while Aaron Brennan fired over what is sure to be one of the scores of the championship, never mind the game as he dummy soloed Enda Parlon and without catching, fired over the bar to put Abbeyleix into a 0-17 to 0-11 lead after 37 minutes.

PJ Scully was leading the Borris-Kilcotton charge and he went on a tour de force of free taking including a '65 and a free from behind his own half back line as Borris-Kilcotton got back to within a point. Brennan added another free for Abbeyleix at the other end just before the water break to ensure they held a two point lead - 0-19 to 0-17 with 15 minutes to go.

Both sides were refusing to give an inch in the closing stages and Abbeyleix, aided by a monster free from Enda Rowland edged into a 0-21 to 0-18 lead with 10 minutes to go.

Borris-Kilcotton were rattled and as their wides tally soared, Abbeyleix gained in confidence that they could take the scalp.

Ryan Peacock and Philip Tynan exchanged scores to keep Abbeyleix two up while with a minute to go, Liam Delaney pushed the lead out to three.

Enda Rowland was called upon to deny Neil Foyle but Scully added the '65' to make sure there was two points in it as the game entered injury time.

Borris-Kilcotton never threw in the towel and their determination was rewarded with two late points from Patrick Whelan and a last gasp free from PJ Scully earning them a draw.