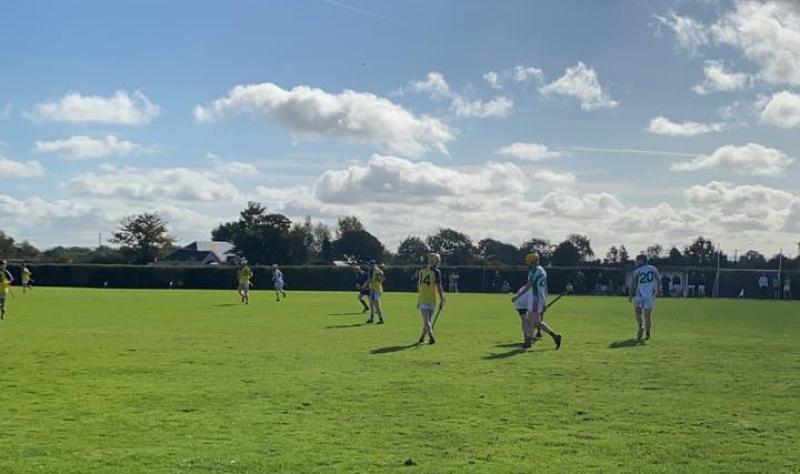 Abbeyleix St Lazarian’s first team suffered a tough defeat last Thursday night, as they fell to The Harps heavily in the Senior relegation final and were subsequently relegated to the Premier Intermediate ranks.

It’s not all doom and gloom around the club though. Their second string, who had a lot of young talent playing, booked their place in the Junior ‘A’ hurling final thanks to a comfortable victory over Rathdowney-Errill’s third side.

Abbeyleix’s defence was the catalyst for their win in Trumera on Sunday, with the likes of David Walshe and Steven Reilly keeping things solid at the back and this allowing Conor Bergin and Cathal Doyle further forward to pick off scores.

The opening quarter was a tightly contested affair, with little separating the pair. Both wing-forwards on either side of the field, Conor Bergin, and Aaron Costigan, exchanged frees in the early days here on a lovely sunny day in October.

Abbeyleix hit two in a row to nudge themselves in front then. Corner-forward Sam Quinn scored their first point from play, before Conor Bergin landed his third free between the posts. Rathdowney-Errill replied through Aaron Costigan to level again though, as he put over another free before firing over a nice score from play on the half-turn.

Vinny Cleere edged Rathdowney-Errill ahead, but an Enda McWey score just before the water break after good play from Sam Quinn meant the teams went in all square at five points apiece.

The second quarter was a low-scoring affair, with only four scores registered during this timeframe between the two teams. Big Cathal Doyle had the first real goal chance of the game for Abbeyleix, but his effort was straight at Ben Campion in the Rathdowney-Errill net.

Abbeyleix did string together three on the trot to take the initiative before half-time though. Bergin, after missing a few frees, slotted one over to edge them ahead. Then Shaun Fitzpatrick played a lovely ball into Cathal Doyle, who caught well before placing one over between the posts.

Cathal Doyle started at centre-forward but was quickly moved into full-forward. His massive stature in or around the square caused Rathdowney-Errill all sorts of issues, as they needed to always keep a few bodies around him. Doyle’s presence yielded another score for Abbeyleix, with Bergin scoring his first point from play.

Gavin Delaney swung over a delightful score for Rathdowney-Errill just before the interval, but they still trailed 0-6 to 0-8. They would enjoy a slight breeze behind their backs for the second half though.

However, it was all Abbeyleix in the third quarter, as they put the game to bed. Four points in quick succession from the outstanding Bergin, with two coming from play, was followed by a goal from Cathal Doyle. Sam Quinn showed a nice turn of pace to go through the heart of the Rathdowney-Errill defence, before laying it off to Eoin Egan, who swiftly passed to Doyle. The big man mistimed his first effort with a wild swing, but Doyle would end up bundling it the back of the net anyways.

That goal would seal Abbeyleix’s place in the decider, with Bergin slotting over frees in the final quarter to keep them well ahead.

Camross power through the gears to dismantle Castletown