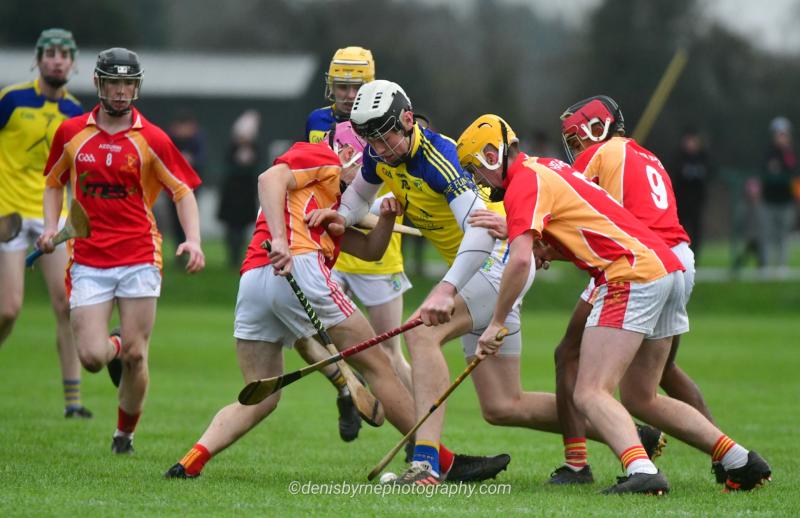 The Harps and Abbeyleix have been strong rivals at underage level in recent years, and they also met in the Senior delegation final a few months ago where The Harps relegated Abbeyleix to Premeir Intermediate ranks.

After losing that one, as well as the Minor ‘A’ final to Camross through a heartbreaking last-minute goal, Abbeyleix we’re determined to triumph in at least one final this season.

In this U-20 ‘A’ final played in the LOETB Centre of Excellence in Portlaoise, the sides were level at half-time. However, Abbeyleix dominated the second half, as their intensity in the tackle as well as some fine scores from Aaron Brennan and Ciaran Byrne saw them to a comfortable ten-point victory.

LAOIS U20 'A' HURLING FINAL

Ciaran Byrne opened the scoring for Abbeyleix, as he received the ball and split the posts on the half-turn. After a few early misses, The Harps’ Mikey Monaghan replied by landing a placed ball over the bar to get his team on the scoreboard in the Centre of Excellence.

Davin McEvoy and Colin Byrne landed points from play for Abbeyleix to help them regain the lead. The rest of the quarter was a fairly hard-fought and tight contest, as both sides hit a few bad wides as well. Abbeyleix held a narrow 0-5 to 0-4 lead during the first water break.

Abbeyleix roared out in the second half by tagging on five scores unanswered, as they took control of this U-20 final. Aaron Brennan pointed a free, before the impressive Colin Byrne found his range once more with a score from play.

The Abbeyleix full-forward, Ciaran Byrne, scored two cracking points either side of an Brennan free to leave Abbeyleix five to the good. However, The Harps wiped out a lot of that good work with a fortuitous goal and their first score of the second half.

The Harps’ free-taker, Mikey Monaghan, dropped his effort short and into the square, but no Abbeyleix played dealt with the danger. The sliotar ended up going through full-back Lawson Obular’s legs and into the back of the net.

Brennan knocked over the last score of the third quarter for Abbeyleix though, who led 0-13 to 1-7 at that stage. They must have felt that they deserved a far bigger lead than that though going into the final quarter after playing almost all the hurling during the previous period.

Abbeyleix look composed despite that goal going in, as the momentum remained firmly with them at the start of the final quarter. Brennan grabbed his first point from play and then tagged on another free to push his team five in front.

Shaun Fitzpatrick, who had got through a lot of work during the course of the match, scores his first for Abbeyleix. They were winning all the fifty-fifty battles now, and further points from Ciaran Byrne, Brennan (free) and Fionán Mahony pushed their advantage out to nine points.

The Harps returned to the scoreboard through a Cody Comerford free, but they just could not break down a resilient Abbeyleix back-line. Brennan finished the game off by scoring twice, one from play and one from a free, as Abbeyleix were crowned U-20 ‘A’ hurling champions.

REVEALED: Cheddar and Laois learn championship fixtures as hurling round robin draw made