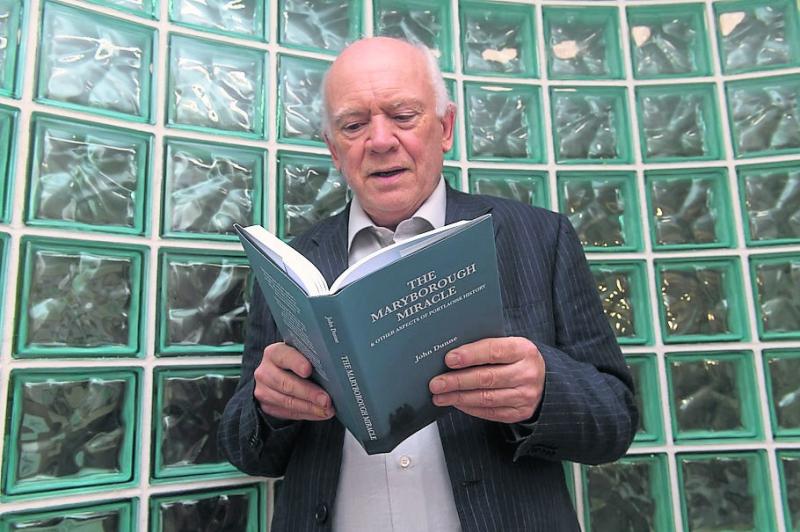 The capital town of Laois is rapidly growing and changing but one local writer is determined to keep Portlaoise's past alive well into the future.

Retired school principal John Dunne has launched his final book in a trilogy about the people and stories from his beloved town, just in time for Christmas shoppers.

The Maryborough Miracle is packed with two centuries of real life drama and interesting facts, from a young woman’s miraculous cure to the death of a notorious murderer; from emigrants’ memories to a detailed survey of the Market Square and its people.

It follows John’s best-sellers Home, published in 2016 and A Book About Portlaoise released in 2019.

His latest history book was largely written during the Covid pandemic and in it he addresses not just this new disease, but another one that ravaged the locality in the 1830s.

“I had a lot of notes and preparatory work done but Covid gave me a lot of time to revise it. When you are writing history, exactitude is all important. I find it easier to write a novel. I’ll probably go back to that next,” he said.

He describes the effect he saw of Covid in Portlaoise.

“The town was like a ghost town. It was amazing for me, I grew up there on Coote Street, and it was so strange to stand on the top of the road and see so few people around.

“It had a very minor effect on me personally. All my interests are home based, I’ve no interest in sport so I could indulge them to my heart's content. I didn’t mind being cocooned. I wasn’t particularly afraid of catching it, we took all the precautions and my family were very good,” he said.

John has a fine Portlaoise pedigree, having traced his family genealogy of Dunnes and Lalors right back to the 1780s all living in the town.

“I’m the original townie and original bogman,” he said.

A grandad of five and married to book editor and poet Denise Curtin Dunne, John retired after serving as principal at The Heath National School for 35 years 15 years ago to focus on his writing career.

“I loved teaching there but I was always into reading and writing. I have a long track record of reviewing books and I have a big interest in James Joyce and Bob Dylan,” he said.

He published his first book, a novel, 30 years ago.

He explains why he chose to focus on Portlaoise’s history in recent years.

“There is nothing particularly important about Portlaoise, no more than any other town, but every town has history that we’re inclined not to appreciate. I’m not interested in ancient history like the bronze age or artifacts, but much more local and contemporary history, how people lived. I must have hundreds of people named in each book,” he said.

Like its predecessors, The Maryborough Miracle spans two centuries of life in the town and is full of real characters, places and historical events.

The miracle cure after which the book is named, is an “amazing story” says John who is keeping the details for buyers of his book.

“This was a young child who had problems and was cured but how that was done is the most interesting part. I’m still surprised by it,” he said.

Other chapters feature local placenames and landmarks, the hostile rivalry between local newspapers in the nineteenth century and the long quest to find somewhere decent to swim in the most landlocked county in Ireland.

“I write on topics because I start off with ignorance on my part and I don’t know enough so I try to find out. I hope other people have the same interest,” he said.

They certainly have shown interest in his previous two books of the trilogy.

“The last one sold 1,000 copies in the town. A lot of people talk about begrudgery or of Portlaoise not supporting their own, but I have found the very opposite. I’ve been overwhelmed by the support I’ve got from Portlaoise people. I’ve had full houses at launches," he said.

He reflects on the rapid changes in Portlaoise as the town grows in size and multiple cultures.

“It’s unbelievable. There is good and bad but it has improved tremendously over the years. A lot of it is down to Laois County Council and I’ve been critical of them in the past. The local Tidy Towns volunteers are saints for the change they have brought on the town. Yes there are problems, anti-social behaviour and drugs but those are endemic in every town big and small in the country. Driving through Portlaoise now, people would be impressed. Main Street looks brilliant, I think it’s a great place to live,” he said.

The Maryborough Miracle was launched in November by All-Star football legend Colm Browne in Dunamaise Arts Centre. It included an audio-visual presentation of Music in Maryborough 1880 –1950 also created by John.

It is on sale exclusively at Allbooks in Lyster Square, priced at €20.

See photos from the booklaunch below.